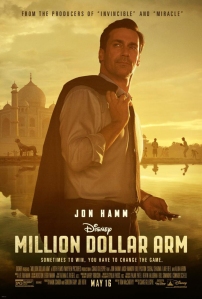 Jon Hamm takes the helm as J.B. Bernstein, a sports agent who stages an unconventional recruitment strategy to get talented Indian cricket players to play Major League Baseball. From the opening speech with JB attempting to sign a major player to his firm, the pitch and delivery just reminded me of Mad Men and how much I will miss it after next year. It felt like a what if scenario. What if Don Draper left advertising and became a sports agent? Hamm has proven yet again that he can take the lead and deliver a charismatic performance.

I fear that this could be the beginning of Hamm being typecast to play more Draper-esque roles. But it’s early days and for some people, certain actors will always be certain TV or film characters. For now, it works. He carries the film where the story may drag or dip into familiar cliched territory. I mean at least this story was worth telling. I didn’t realise that this had only happened recently. The fact that JB channel flicks to Susan Boyle’s Britain’s Got Talent audition. A perfect metaphor for judging a book by its cover. The very lesson this film aspires to teach.

Alan Arkin is . . . pretty much playing Alan Arkin. Sleeping, moaning and whining about the curry he ate the night before. Some of his quips were funny but he has played this character before and so much better in Little Miss Sunshine. He definitely has been typecast. He grumbles and has the odd liner but disappears all too quickly to make a good impression. He inevitably reappears and justifies his character’s relevance. Only just. Bill Paxton played his part well and to be honest, there wasn’t enough of him but this isn’t his story. But my God, he has aged. The years have suddenly caught up with him. I know he was probably made up to be a little older for the role but yikes. Anyway, the main story is on our three Indian protagonists.

Pitobash as the eccentric Amit was brilliant. Scene stealing at every moment. From taking every little phrase literally;

Pitobash: “You want juice. I get you juice”

To his documentary film making catching all the things JB wouldn’t want in a PR video, he always brings a smile. Shuraj Sharma as Rinku with a unique stance for pitching baseballs and Madhur Mittal (Slumdog Millionaire) as Dinesh play the parts brilliantly. At first, Lake Bell’s (What Happens In Vegas) character of the hot doctor lodger that rents JB’s outhouse bungalow was a little annoying and so predictable. However, Bell and Hamm manage to convey enough chemistry to stop it from spoiling too much of the fun, even if the outcome is so obvious. Aasif Mandvi (The Internship) was wasted in his role, bar one good joke about recruiting the only three Indians who can’t stand cricket. This did make it all the more interesting that the very pitchers they are looking for are field hockey and track athletes.

To be honest, the length didn’t really bother me. I normally complain about the wavering length and at over two hours, I thought there may have been more moments in which I would be glancing at my watch. Not so! The opening may have been slow burning but there was enough easy going humour, charm and story to get away with it. Director Craig Gillespie catches the hustle and bustle of Bombay perfectly and has a cheeky poke at their politics. “We don’t bribe. We simply bypass the busy system by offering a little money”, offers Darshan Jariwala’s incompetent but loveable aide Vivek.

The first hour allowed time to be spent on the character’s backgrounds and upbringings which gave them a more rounded dimension. It also allows for a compelling contrast when the lads are put up in a hotel and are lost in translation with an elevator and escalator. I expected a little more tension with Dinesh’s family with his strict father but an unexpected heart to heart surprised me. I also feared that the film would baffle me with baseball statistics and terms as I’m not a baseball (or sports in general) fan but they use only a few slang words which are easily explained.

However, it’s funny, easy going with a nice uplifting, if slightly abrupt, ending. A somewhat mish mesh of Jerry Maguire and Slumdog Millionaire. The cast work brilliantly together as their fractious relationship and unexpected union are tested as they work against the odds to prove everybody, and themselves, wrong that nothing is impossible. Awww. Nice stuff.

3.5/5 Certainly one of the better ones. Not without its imperfections but worth a watch.