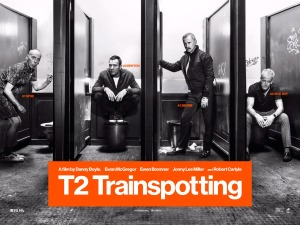 Choose life. Choose a job. Choose a sequel that is actually good. Choose this film.

It was always going to be tough to top such an iconic film. BUT if anyone was going to take it on, it could only be Danny Boyle.

21 years?! 21 years for a sequel that no one really asked for or wanted. BUT come on. How many of you were buzzing when those teaser/trailers hit the big screen with Iggy Pop’s Lust for Life blaring in all its glory?!

As soon as the hypnotic bassy beat of High Contrast’s Shotgun Mouthwash blared through the speakers, I cracked a grin. I knew what I was getting in for.

I was a huge fan of the film BUT have yet to read the Irvine Welch novels. Although I’ve been told they are not the most accessible of novels. A perfect example demonstrated with Spud’s “memoirs” as the lads ripped him for his indecipherable drivel. The bigger joke being that they were actual extracts from Welch’s books.

Considering the massive time gap, the cast hadn’t really changed. A perfect contradiction. Everything had changed BUT it was all still the same.

I couldn’t fault any of the lads. Bremner was spot on as Spud. His random stories delivering some cracking one liners. McGregor was superb. Miller nailed it. BUT there was one man who ran the show. And that man was Ol’ Begbie himself, Robert Carlyle.

He chewed up every scene he was in. A bi-polar bad ass. Bringing nail biting tension and bittersweet humour by the bucket loads. The man you loved to hate. A ticking time bomb.

The first act was just as mad and frenetic as the original. And I have to admit, I was beaming from ear to ear. All the little nods. The soundtrack was spot on. Mixing new with the old. Boyle teasing every scene with a drop of Iggy or a riff of Underworld. Perfect.

The excitement as the gang united for one more drug fuelled mind f**k of a reunion.

However, it wasn’t going to be all hugs and kisses now. Let’s not forget that Renton ran off to Amsterdam with all the drug money. Begbie vowing to kill him if ever their paths would meet again.

It was funny watching the mixed reactions as Renton returned BUT it was also quite hard hitting as well. Especially with Spud as he tried to get clean after years of being a junkie.

Sick Boy was still up to the same old hustle. Extorting rich businessmen in sleazy hotels and Begbie . . . Well, he broke out of prison.

I was in stitches watching Begbie trying to educate Begbie Jr with the ways of his trade. Especially when the poor boy would rather focus on his degree in Hotel Management than tea leaf a 50 inch flat screen.

The middle act did test me as we waited for Renton’s inevitable reunion with Begbie. Wondering if Sick Boy would screw him over. However, once the pair inevitably met, it was gritty, enthralling and funny.

Seriously when the pair realised they were in the cubicles next to each other, it was like something out of a Marx Brothers sketch. I will say no more.

It really came full circle as the lads re-evaluated their lives and remembered the glory days. The retreads through pivotal scenes were enjoyable as it recapped for some of the less avid Trainspotting fans particular plot points.

There was even a revelation that I never picked up on from the original. BUT after a while, it got too repetitive and took the attention away from the ongoing story line. I was starting to feel like I was watching the first one all over again.

BUT Renton and Sick Boy’s little con was entertaining enough. Infiltrating a Protestant pub to steal bank cards. Their ruse nearly discovered until the pair had to pull one hell of a distraction. Trust Boyle to get McGregor singing. And what a song! THERE ARE NO CATHOLICS LEFT!

For most of the film, I was pleasantly surprised BUT that’s not to say that it was perfect.

Anjela Nedyalkova’s turn as Veronika was a mixed bag for me. She came off as an unsuspecting femme fatale that got in the way. A mere plot device to spurn the fractious relationship between Sick Boy and Renton while helping Spud focus his rehabilitation on something more productive.

I didn’t want to spoil too much about who pops up and what BUT Shirley Henderson was completely wasted as Gail. A mere passing cameo. Shame.

The pace was a killer and it really dragged to that finale. BUT once it kicked off, it was tense, unsettling and delivered a fitting swansong that ticked all the boxes.

A gritty visceral emotional rollercoaster ride that perfectly tackled friendship, loss, nostalgia. A bloody good watch from a reunion I didn’t expect. For a sequel I never thought would happen.

Please enjoy this High Contrast song and suffer the infectious beat that has been in my head for days. 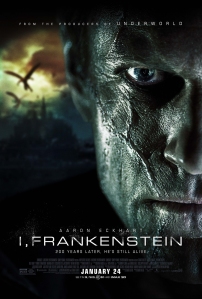 I want my money back.

I can’t find the words. I can’t believe something that looked so good, could be so bad.

That’s 90 minutes of my life I’ll never get back. A dull, plot holed mess with a decent cast playing poorly written and stocky characters. The 3D was wasted on the fantastic set pieces. BUT that doesn’t excuse a bad movie.

Despite a reasonably watchable opening sequence, you can’t help but pick at the endless plot holes. Look, I know these sort of films were never going to win critical plaudits. And I went in hoping for big, dumb fun monster movie. BUT even as a B-movie, it struggles to intrigue or entertain.

As soon as I saw those five wonderful worlds, my heart dropped. “From the producers of Underworld”. Okay, I actually didn’t mind the first Underworld. Kate Beckinsale’s my Kryptonite. What can I say?

Anyway, I, Frankenstein throws us straight into the Creature’s “birth”/”rebirth” back in the 18th Century. It zips along quite well and skims straight through the familiar drivel. Creature hates inventor. Inventor chases after creature. Hunts creature down. Creature falls in ice. Realises he is immune to extreme temperatures and suddenly has incredible super strength. Wait, whaaaatt?

However, this is soon shoved aside for a mental creature combat sesh with funny looking demon things and gargoyles fighting over the Creature. The special effects are decent and the only thing I can commend is the action. BUT once Eckhart’s creature is picked up by the Gargoyle Order, my interest plummeted.

Now Aaron Eckhart (you may remember him as Two Face in The Dark Knight) is a very good actor BUT even his deadpan grimacing only made things worse. He delivers the lines with conviction. It’s just a shame that the lines were so bad. My personal favourite being, “I think your boss is a demon prince”.

Once he is abducted by the Gargoyle order led by their Queen (Mirando Otto – The Lord of The Rings), you soon realise the mess you’re about to sit through. She explains the plot in a swift minute that evil demons want to destroy mankind and they need the Creature or his inventor’s “How to Resurrect Dead Bodies” diary to help. Simples.

Nah, The Creature ain’t got time ‘fo dat. He hates everyone and everything. So it flashes forward 200 years. 200 years?! Really? Which means 20 mindless minutes of Adam (Oh yeah they call him Adam because he is the first of his kind. Nice touch) moping around and hiding. Until he decides, “I’ve had enough”.

Slays some gargs which was pretty good to watch. Blades flying, demons evaporating in flames, gargoyles grunting, more please! Only to get caught by the Order. Again.

Cue more cliched talking with our “loner hero” refusing to take the call and save the day. That and the endless to-and-fro of Adam being captured by the demons, then the gargoyles, then some scientists.

All I kept thinking to myself was they have Frankenstein’s book to resurrect the dead. So why do they need Adam? This must have been a flaw that the writer couldn’t decide on. He’s proof that the book works so we need him, right? Nah, kill him. No, wait! We do need him. Make up your mind!

The beautiful Yvonne Strahovski (Chuck) does a passable English accent. Better than Amy Adam’s Oscar nominated one in American Hustle anyway. She is completely wasted as a generic scientist thrown into the mix. There is zero chemistry between her and Eckhart. The only surprise after all the predictable luvvy duvvy guff was that they didn’t get together!

Bill Nighy just “Nighy-ed” it up as the evil demon prince Naberius and when he transformed into his demon form . . . My God! He looked like Ivan Ooze. I couldn’t fight back the belly laughs.

Otto’s Gargoyle Queen was one of the most pointless characters going. All she does is pull blank faces and stare into space. Not to mention the repetitive one liners and unnecessary regurgitation of obvious plot points.

I could go on, but I’m exhausting myself. Jai Courtney (Terminator: Genisys) was terrible as the Gargoyle Queen’s protector, Gideon. All he did was pout and sulk. His character looked badass. BUT he’s not even allowed to intervene. The Queen gives him the key to everything. And he can’t use it. Come on! Even if it looked like an amazing battle axe. Nope, still can’t.

Also, the Gargoyles are supposed to fight in the shadows. Yet by the frantic finale, they are flying openly around in broad daylight. Hovering outside a public train station because no one will report it or take pictures on their phones, right?

Eckhart may have looked hench, but they didn’t bother sorting out his scars that magically reappeared at different areas of his face! This was a joke. If only, they played it out as one. It was far too serious for its own good. Even when the Creature tries to explain the situation to Strahovski’s scientist, you just cringe.

Dull, uninteresting, hilarious for all the wrong reasons. I hope a sequel is not in the works. If there is, god help us all!