A stellar turn from Lerman and good chemistry makes this uneven coming of age drama one to watch.

In 1951, Marcus (Logan Lerman), a working-class Jewish student from New Jersey, attends a small Ohio college, where he struggles with sexual repression and cultural disaffection, amid the ongoing Korean War.

I’m not familiar with Philip Roth’s works so I can’t make comparisons on the film’s adaptation of his 29th novel BUT it was a well acted, if tragically patchy affair.

This was a perfect transition for the Percy Jackson star. Proving that he will be one to watch in the future. I know some of you will be more familiar with Lerman in The Perks of Being a Wallflower (A film I have yet to watch) BUT I felt his character was too passive to make an impression in Fury.

However, he was a charismatic lead that carried the story when the pace tragically dragged. Context is crucial when approaching this piece. The backdrop of the Korean War became a tipping point for a clash in values and (most importantly) beliefs.

We follow Marcus as he escapes the call to war and the overbearing shadow of his overanxious father (Danny Burstein – Boardwalk Empire). A man troubled by the turn in tide and loss of life.

I did find myself fidgeting a little through all the intellectual academia anecdotes as Marcus tries to shy away from his heritage. BUT by doing so; he is soon under the watchful eye of a prospective Jewish fraternity and designated to a dorm with the only Jews on campus. Well, according to his high strung room mate Bertram Flusser anyway.

Ben Rosenfield (Irrational Man) was highly entertaining as Flusser. Outspoken and he doesn’t care who knows. Blaring classical music to the masses and sharing his views whether you want to hear them or NOT.

“There were no girls like Olivia Hutton back in Newark”.

BUT beneath all the (endless) Bertrand Russell (A renowned social critic. Yeah. I had to do some research after viewing) quotations and heated societal debates, there was still a boy meets girl love story at its core.

The lovely Sarah Gadon (Stephen King’s 11.22.63) delivered an engaging performance as the mysterious Olivia. The girl that would trigger Marcus’ sexual awakening in an age of repression. A much needed presence.

The pair had great chemistry and I was happy to persevere as their romance blossomed. Her upfront approach in sex was a complete culture shock for the timid Marcus. Putting it down to her parents’ divorce.

However as we got to watch their relationship grow, the pair soon opened up and we got a better insight into Olivia’s past. Punished with a “reputation” for her promiscuity. A reputation that threatened to cause a rift between Marcus’ friends and family.

Tracey Letts (Homeland) was excellent as the scrupulous Dean Caudwell. His casual conversations nothing more than preaching. Enforcing his values on Marcus. Believing the boy to have “lost his way”. Interrogating him on the exact details of his familiarity with Olivia and even his own beliefs.

Right down to why he didn’t put down on his application that his father was a kosher butcher? A ploy to hide his religion? Every question suggesting an ulterior motive. Making assumptions about the headstrong protagonist. The heated exchanges were quite riveting to watch and really showed Lerman’s potential with James Schamus’ dialogue coming to life.

Indignation certainly made an interesting contrast to the present day. Religion, divorce and sexual expression are still rife BUT have thankfully shown a lot more progression and acceptance compared to the fifties.

BUT it was all a little too “talky talky” for my liking. The premise felt like something more suitable for a TV movie or (even better) as a theatrical performance.

It didn’t help that when things seemed to reach boiling point with Marcus having to make a decision, it ended so abruptly and on such a bleak note that I was left feeling a little disappointed.

Despite some great performances from some underrated actors, I fear this arduous affair may get lost in the ranks. 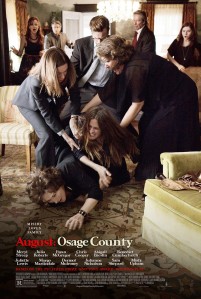 Behold, an Oscar candidate. A proper one. A perfect showcase in sheer acting. I may have said that a few times now but this one takes the cake.

Brilliant, bold, riveting drama with the best acting ensemble I’ve seen in some time. Meryl Streep once again demonstrates why she still rakes in the nominations. Phenomenal. I may have to retract my bet on the Best Actress nod. Tracey Letts adapted the screenplay from her own award winning stage play. Some may argue that the film may be restricted to the house, a beautiful house at that. But I feel it works as the perfect wrestling ring for one of the most dysfunctional families I’ve seen since Arrested Development (as exemplified perfectly in the poster).

Admittedly, I was reluctant to see this. Me? Reluctant to see a film? Strange. I know. The trailer didn’t sell it for me. But Mum’s a Streep fan and so we went . . . and was pleasantly surprised. What was strange was seeing ol’ brainbox Sherlock Holmes, Mr Benedict Cumberbatch as silly sympathetic simpleton Little Charlie. An odd, if well acted, transition. After his shoddy accent in The Island, Ewan McGregor has finally mastered the American accent. The only thing I could pick at is why on Earth did he have his teeth done? Are you Rylan in disguise?! (X Factor’s Rylan Clark. If you don’t know, who that is. Well, you’re lucky). Apart from that, very good. In all fairness, the cast were brilliantly picked for the roles. The only problem with so much talent on display, certain actors get pushed to the back of the line but the fact they are still able to make an impression, shows how talented they are and how well developed the characters were. Juliette Lewis as the younger gullible naive daughter (Not surprising that Lewis would play the dimwit but she nails it so well). Delmot Mulroney as the laid back slacker with the fancy Ferrari, trying to stay cool with the kids, reeking of a mid-life crisis.

Julianne Nicholson as Ivy, the daughter that stayed while the others flew the coop. And speaking of coop, it was great to see Chris Cooper. An underrated actor who always shines. I mean only he could go from American Beauty to The Muppet Movie and nail it. Desperately trying to keep the peace in a house full of nutters, his breaking point speech was brilliantly done. You couldn’t help but root for the guy. It could be argued that Abigail Breslin and Sam Shepard were wasted characters. But the real story is between Violet (Streep) and Barbara (Roberts). Breslin’s character Jean was more of a foil to unearth their resentments and there is a reason for Shepard without spoiling anything. Great actor and the fact he made an impact with a mere couple of minutes, reciting TS Elliott was very good. But anyone could have played him.

There are three actresses that stood out. The first was Margo Martindale (a talented actress that has played some memorable roles from some of my favourite TV shows, Dexter and The Americans. She especially struck my eye after her turn in Justified as the creepy Mags Bennett). She plays Mattie Fae brilliantly. Her chemistry with Streep was fantastic. You could have believed that they were sisters. They made it seem so natural. Now the other two and the main stars, who have been rightly nominated for Oscars respectively, are Julia Roberts and Meryl Streep as Barbara and Violet. They desperately try to keep civil during a family crisis that has finally brought all the family home, despite their strained relationship but it isn’t soon before tempers flare up and everyone’s dirty laundry is thrown about. The pair are fantastic and when they confront each other over their problems with one another, it is great to watch. Riveting and at times emotional. Meryl Streep, however, was on another level. As soon as she entered the first frame, she stole the show and dominated the film as the overbearing pill popping matriarch. Her erratic behaviour from mad ranter to a vulnerable sufferer was conveyed expertly. Her “truth telling” guilt trip at the dinner table was brilliantly done. As the film progresses, we finally get to see her vulnerability and show real sympathy for her. The final moments are a fitting end note to an impeccable performance by an incredible actress. Just watch it!

Family secrets are revealed, unexpected twists and turns jump up, it all kicks off and then . . . ends quite abruptly. The ending was to be expected but it seemed to wrap up all too quickly and loosely but then when are family matters ever really resolved? But after so much build up, tension and great acting, maybe a little more time could have been spared on the final minutes, especially when one of the characters drives away in an unexpected direction. I’m staying as cryptic as possible as I want people to see this. Speaking as someone from a big family, there were so many personalities that reminded me of my own. The dinner table scene demonstrated that perfectly, especially when Violet told the men off for taking their jackets off at the table and watching them put them back on like scorned children. I haven’t seen the play that this was based on but I would very much like to now. Some may argue that the pace doesn’t justify the means but I don’t believe so. I think it allowed the simmering tension to bring to the boil perfectly, making it better for it.

All in all, well shot, well written, well acted, well done! Hazaar! In Streep we trust 4/5