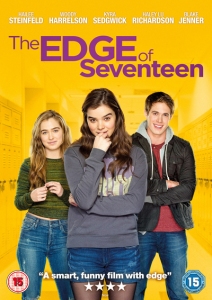 I didn’t think I’d enjoy this at all.

The endless praise and surprisingly high ratings piqued my curiousity. When I saw Miss Steinfeld in True Grit, I thought to myself, “She is going to be one to watch for the future” BUT the last few films I’ve seen her in, I’ve been disappointed. Playing nothing more than a neurotic, fast talking, annoying teenage daughter.

She really grated against me in Pitch Perfect 2.

Within the first ten minutes of Nadine’s verbal diarrhea, I thought I might have to switch this off. Her melodramatic cries for attention had me wincing. That was until she shared her feelings with a seemingly uncaring teacher (Woody Harrelson).

What ensued after was a pleasantly entertaining coming-of-age family drama that hit home.

The film flicked back and forth as we got a glimpse into Nadine’s past right up to the . . . edge of 17. The melancholy and nostalgia ripe for the picking as she made her first friend at pre-school and bumped heads with her erratic mother (Kyra Sedgwick).

Her dad being the wedge between them. An endearing relationship that was cut short (rather unexpectedly).

It was easygoing and funny enough as Nadine dealt with growing up, high school crushes, her sibling rivalry with her over achieving brother Darian (Nope, not a typo. Actual name) and those . . . embarrassing haircuts. Rocking a do that bared striking similarities to Pedro from Napoleon Dynamite.

However, being a teen drama, it wasn’t long before Nadine’s relatively tranquil and normal life came crashing down after walking in on her BFF in bed with Darian.

Throwing her into a helter skelter of emotions and self-reflection as she threatens to lose her only real friend and cause a rift in the family.

After commending Harrelson’s performance in Three Billboards last month, I was impressed to see that the comedy actor wasn’t a one trick pony (I know! True Detective, yeah yeah yeah). He really has matured as an actor and delivered a sterling turn as the cynical Mr Bruner.

I loved the dynamic between Nadine and her long suffering tutor. The tit for tat banter really made the film. A constant thorn in the miserable mentor’s side. BUT beneath that gloomy exterior, lied a man with a good heart. Desperate to see this neurotic teenager find her way and . . . leave him alone for a god damn second.

Hayden Szeto was brilliant as Erwin. The geeky film nerd desperate to win Nadine’s love and affection. The awkward cringe inducing first date, the idle chit chat, we’ve all been there. I felt for the poor chap as he got “friend zoned” again and again.

What I loved most about this film was how writer/director Kelly Fremon Craig tackled loneliness and isolation among the characters.

Nadine’s depression and frustrations reaching breaking point as she tries to break up the people who are desperately trying to help her. The stubbornness and refusal to see other people’s problems over her own as she acted out.

I was a little embarrassed to admit that I could relate to the headstrong 17 year old girl. I was dropped by my best friend in sixth form out of the blue which knocked my confidence for six and forced me to re-evaluate myself.

I know the situation was reversed for Nadine BUT the anguish and awkward encounters as she tried to branch out struck a chord for me. Brilliantly captured and acted perfectly by Steinfeld.

I wasn’t sure on what direction the film would take as it reached it’s emotional finale. I won’t spoil it. BUT worth a watch.

A pleasant surprise. Not without its imperfections. It was still a little cheesy and the pace did test in places BUT hype definitely helped this time around. 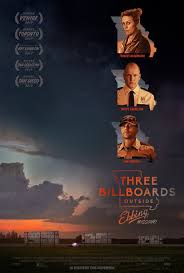 A mother (Frances McDormand) personally challenges the local authorities to solve her daughter’s murder when they fail to catch the culprit.

A brooding country noir riddled with black comedy. If it wasn’t for all the profanity, you could have said it was a Fargo sequel.

Bold, brash and a little long in the tooth BUT a damn good watch all the same.

Funny how three billboards can cause so much trouble? Originally aimed at the local sheriff William Willoughby (Woody Harrelson), one woman’s crusade for justice causes a stir among the community.

Frances McDormand is a brilliant actress. I knew exactly what she would bring to the table. That bitter Olive Kitteridge grit. Sharp tongued, outspoken, on the war path and not giving a damn who knows it. A powerhouse performance.

She stole every scene. You really felt for her. Her frosty reception with the town priest and her discussion on the definition of the word ‘culpable’ was worth an Oscar nod alone.

All aided by a sterling script, of course. Penned by none other than the In Bruges (Highly recommended) writer/director Martin McDonagh.

The fiery quick witted dialogue delivered that sinister comical edge as Mildred dealt with all sorts of unsavoury characters as the townspeople soon let their feelings known on the billboards. An awkward trip to the dentist made for tense viewing.

The pacing did test in places. Originally I felt the film slackened when McDormand wasn’t involved in the mix. A compliment to her performance. BUT it also allowed for some sterling turns from a highly talented supporting cast.

Woody Harrelson was excellent in the understated role of Willoughby. A man desperate to keep the peace BUT plagued by his own demons and the system he had sworn to protect. A tragic hero if ever there was one. A performance full of nuance that knocked me for six. Proof that the Cheers star can act.

I wanted more exchanges between the struggling sheriff and the militant Mildred. Despite her anger with the law, there was still respect between them.

Caleb Landry Jones (Get Out) played the simple ad clerk Red Welby brilliantly. His run-ins with Mildred delivered several humourous encounters. Ol’ Tyrion (Peter Dinklage) was wasted in his small role (No pun intended). He did his best BUT then again, this wasn’t his story.

I hope Lucas Hedges (Manchester By The Sea) isn’t going to be typecast in the grieving son role. He worked well with McDormand and I liked the fractured mother/son relationship. It was just a shame that he was pushed into the background. Especially after a heated “family reunion” with his deadbeat dad.

The uneven middle act left me wondering where this was all going. The tone jumped from moments of violent, foul mouthed mayhem to ones of tearful reflection and sorrow. BUT as much as I was getting frustrated, I still wanted to seek out the end game.

The always underrated Sam Rockwell nearly stole the show from McDormand. His character Deputy Dixon was a particular highlight. I loved the journey that this dimwitted racist country mama’s boy went through. A rollercoaster ride if ever there was one. I hated him, I laughed at him, laughed with him and by the end, I felt sorry for the poor schmuck.

The second half of the film took a much more sombre turn than I expected. Especially when we delved a little more into Mildred’s and Willoughby’s background. It turned an incredibly witty black comedy into so much more as everything came to a thrilling and heart rending climax.

The final act and the bittersweet ending spoke volumes as it tackled grief, anger, hate BUT most importantly forgiveness. It didn’t quite deliver what I expected BUT I was left smiling after experiencing this redemptive journey with Mildred and Dixon, in particular.

Something I haven’t felt with any film in a while.

Try not to buy into the awards hype too much and approach the film for what it is. A brilliantly acted and darkly comical tale of anger, grief and redemption.