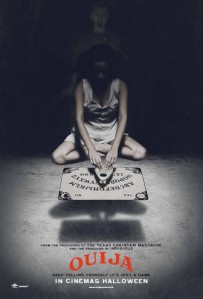 I wish they could have used the Ouija board to summon something better.

The wait continues. Bar a few jumpy moments; another poorly written, schlocky horror film hits the big screen. Is it time that Hollywood give up the ghost(s)?

Unfortunately using a low budget amateur cast with up and coming newbies meant one thing. That this film made money. Which means . . . More of this horrific bilge to come.

So what’s it all about? A group of friends must confront their most terrifying fears when they awaken the dark powers of an ancient spirit board.

Apparently, according to the studio release. I didn’t see anyone confronting their fears. Just running around aimlessly or screaming every 20 seconds (like the annoying spectator at the cinema).

The concept is hardly original but if executed properly, the possibilities are endless. If not? Well you get this.

I was really disappointed. It was the perfect platform for a virtually new and unknown cast to make a name for themselves.

It was great to see Olivia Cooke (Emma Decody from Bates Motel) get a leading role. Her supporting turn in The Quiet Ones gave me high hopes.

She does her best but her character is so flat and uninteresting. It feels like she is sleepwalking through the role. And at times she even sounds like it.

The characters were really unmemorable. I had honestly forgotten their names as soon as they appeared. I had to ask my mate who had no recollection either; merely “Bates Bird” and “that one eyed guy from Percy Jackson (Bradley Smith)”.

If not for the jumpy bits, this would have got a zero. For all my cynical meandering about the predictable checklist that this film churned through, there were several moments that got me good and proper.

It helped to have a ridiculously loud cinema sound system and a screaming spectator twitching every two minutes (No, it wasn’t us).

It took a good 40 minutes before things really got going. That’s half of the film. It felt longer than 89 minutes. The story felt like it was going through the motions.

Childhood friends play with Ouija board. Childhood friend decides to play it again. Dies. 30 minutes of dull dialogue with the gang moping around and grieving before finding said board and deciding to play it. Brilliant. NOT!

I don’t believe in the whole Ouija board thing. My brother did one before and felt that the scenes where they used the planchette (the little triangular board. I did my research. Not just strung together, you know) and asked the questions was creepy and quite accurate. To be honest, how could they get that bit wrong?

I don’t think writer/director Stiles White had seen the British equivalent Long Time Dead. That was a disaster BUT a damn sight better than this.

The characters hardly had my empathy but at least I wanted to see what happened to them. Once the Ouija stuff began, it was all the same old guff. Things moving in the background. Doors slamming. Oven hobs coming on (For some reason).

It was only as the film was ending where I got into it. It was racy, frantic and jumpy. The shadow moving on its own accord. The demonic child (Sierra Heuermann) and mother (Claudia Katz) fighting to claim victims. It finally seemed to be going somewhere. Only for it to end so abruptly and flatly that I felt like I wasted my time.

And of course; to add to my frustrations Ouija left it all open for . . . What do you know? Another installment.

Lin Shaye (Insidious) was the most memorable supporting character in the five minutes she was given. That doesn’t say a lot considering her character was unoriginal and derivative in the first place.

The wait goes on for a genuinely tense, atmospheric horror film.

Stocky, generic and bland character sleepwalk through a dull and predictable story line. If not for the jumpy scenes, I would have bailed out.

The Quite . . . Rubbish Ones, really. A real shame, a rebooted Hammer brings us a jumpy, if tragically predictable and disappointing affair.

With the inevitable tag line, “Based on actual events”, we follow an Oxford University professor and a team of students in the 1970s as they conduct an experiment on a young girl who is believed to be possessed with a demonic force. I had so much hope for this. To be honest, horror films of late have hit an all time low, in every aspect, but the main one being scares.  I was relieved (how wrong I was) when I heard this little demon was created by the producers of the Woman in Black. A genuine suspenseful film that told a story and had scares. I mean it wasn’t that scary but the tension and performances were fantastic.

I hoped with the charismatic Jared Harris (Mad Men) at the helm of this low budget British horror, there could be something but alas it was not to be. It’s not a complete write off. I felt Sam Claflin (Hunger Games: Catching Fire) was a very likeable lead as our conflicted hero. Olivia Cooke (you may remember her from the inaccurate but surprisingly watchable hit, Bates Motel) was fantastic as the vulnerable victim. You do actually care what happens to the pair. The opening half hour builds up the suspense and sets the premise quite well. The unexpected jump here and there kept me on my toes. It made me for watchable viewing. You felt for Cooke’s character as she is interrogated like a Guantanamo Bay victim; forced to stay awake with the endless droning of Slade. I mean, come on it’s bad enough at Christmas.

The sultry Erin Richards with her diva-ish antics is easy on the eyes but nothing else. In terms of story, there isn’t much of one and when plot points are revealed, it’s quite obvious and uninteresting, most notably *FLASH! SPOILER ALERT! SKIP PAST PARAGRAPH IF INTERESTED IN VIEWING* on the reveal of a former patient’s identity. All the build up and flicking back was merely a device to spew up some much needed scares. Where the pace went along quite well, it meandered by the hour marker. Harris is entertaining, if incredibly creepy as his intent to disclaim the supernatural pushes him to the brink. It inevitably occurs in one creepy house. It was nice to see the film try and recreate the old school horror but that is soon thrown out of the window in one scene as we get a handheld camera sequence. Really? I mean, okay, Claflin is carrying a big arse camera but the effect still reeks of Paranormal Activity. Come on, we’ve had a franchise of that. BE DIFFERENT!

There’s enough tension to get the cheeky nibble on your nails or excuse to look at your mate to see if they’re scared, while waiting for impending jump moment. However, it all builds up to the same old guff with the expected, but still makes you bloody jump, last second scare. Once it’s all done, you sit back and think it wasn’t that scary. Not going to be dashing in the house and flicking on lights. It’s been done to death time and time again. Need a break altogether from this genre. Wait for us to miss these or . . . learn from them and make something much better because I know we can. Come on. 2.5/5 for me.