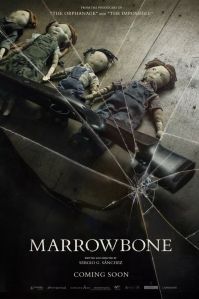 A secret worth finding out?

From the writer who penned The Orphanage . . .

I will admit I may have set my expectations a little high. To see a low key period horror pop up during the summer blockbuster season was a shocker enough.

A young man and his three younger siblings, who have kept secret the death of their beloved mother (Don’t worry. That’s not the secret!) in order to remain together, are plagued by a sinister presence in the sprawling manor in which they live.

As their mother crossed a line across the dusty and dilapidated landing, a promise was made: “No more memories. We are the Marrowbones”.

I feared the worst with the nauseating opening act (and Anya Taylor-Joy’s (Split) dreadfully corny introduction) as the kids adjusted to the seemingly peaceful and idyllic tranquility of the Marrowbone estate. Free from their troubled past.

BUT thankfully that didn’t last long. Or else we would have had one hell of a boring affair.

I couldn’t really call this a horror. I felt a little misled by the marketing BUT that didn’t spoil too much of my enjoyment. Especially when the delightfully shady estate lawyer Porter (Kyle Soller – Poldark) reared his ugly head.

If anything, Marrowbone was more of a psychological thriller. NOT to say I wasn’t wincing in places. There were some brilliantly executed moments of tension. It’s funny how several sinister chords and a tattered sheet over a broken mirror could leave me with no finger nails.

By the 30 minute marker, I was hooked. Right up to the gripping finale as the siblings did everything possible to keep up the rouse.

Every time poor Sam (Matthew Stagg) went off for a wander, I feared the worst. Tiptoeing around the house, afraid to wake the ghost. A story to keep young Sam out of trouble? Or something more?

Creepy and unsettling. This reminded me very much of The Others and The Innocents.

The pacing stumbled in parts and the big reveal of the secret will definitely split people. Some will laugh at the convoluted unravelling, others may be surprised and love the direction it took. I was somewhere in between.

BUT I have to commend the impressively talented and underrated cast; featuring the likes of Mia Goth (A Cure For Wellness) and Charlie Heaton (Stranger Things).

I wasn’t sure that George MacKay would be strong enough for the leading role. I was never convinced with his turn in Sunshine on Leith (despite stellar supporting turns in Pride and Captain Fantastic) BUT I have to say I was impressed with his performance. Showing his range in the final third.

Everyone got their moment to shine. I loved the chemistry between MacKay and Joy. Thankfully Joy’s character came into the fold a lot more as everything came to a head.

It wasn’t perfect and its tough not to discuss plot points without spoiling crucial twists.

BUT it was different, killed the time and if you’re in the mood for a low budget creepy little mystery, check it out.