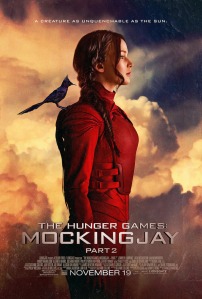 The relentless bestselling blockbuster franchise comes to a close. Did it fly high or flop like a turkey?

As the war of Panem escalates to the destruction of other districts by the Capitol, Katniss Everdeen (Jennifer Lawrence), the reluctant leader of the rebellion, must bring together an army against President Snow (Donald Sutherland), while all she holds dear hangs in the balance.

And now it comes to an end. A billion dollar franchise that spawned more bestselling adaptations than I could take and launched the career of one of Hollywood’s top leading actresses. Was it all worth it? After four films with one being split into two parts, did it conclude to my liking?

To an extent, it did. A mixed bag would be the best phrase to sum up my thoughts. A little disappointing after all that promise and build up. Now, I will admit straight off the bat. Like I normally do. I have never read the books BUT speaking with fans, they have generally been impressed with the adaptations.

I have enjoyed the movies. The first installment reminded me of a Twilight take on Battle Royale which worked a lot better than I expected with a stellar turn from that girl from Winter’s Bone. The pace was always a killer for me. BUT there was always something that made me want to see the next one. A twist, a revelation. And now here I am. Desperately seeking the finale to a franchise I never expected to enjoy.

Now, hardly a shocker BUT Part Two follows straight on from Part One with Katniss recovering from a vicious attack from Peeta (Josh Hutcherson). The opening was dreadfully slow but did just enough to keep me subdued as Everdeen watches from the sidelines. The war on the Districts pushing for more aggressive action.

Things did take a slightly more interesting turn as Katniss began to question the agenda of the movement and Coin’s motives (Julianne Moore). Forcing her to make a drastic decision. To go it alone and seek out Snow.

Once the decision was made and the hour marker hit, the film took things up a notch. It was fast paced, tense and gripping. Everything I expected from a finale. The sewer chase was exhilarating stuff as the gang battled demented white zombie creatures. BUT of course, Katniss was not alone.

Who on Earth in their right mind would bring along a brainwashed Peeta? Hutcherson did a great job as the traumatized fighter. His failure to grasp reality and continuous questioning was interesting to start with. BUT the endless “Real/Not Real” quid pro quo with Katniss soon dragged and annoyed the hell out of me.

But then there wouldn’t be any drama, would there? With a more infuriating love triangle than Lost, things come to an ugly head as Katniss is torn between the loyal Gale (Liam Hemsworth) and the volatile Peeta. It was good to see Hemsworth have a chance to step up after being in the background for the majority of the films.

My main issue with Mockingjay Part Two was that it seemed to suffer from the same problems that the final Harry Potters did. It skimmed past too many characters’ back stories and then quickly threw said characters back into the mix for one last hurrah. Jena Malone and Sam Claflin finally reappeared and made more of an impression this time around. To be honest, I had almost forgot about them after Catching Fire.

Woody Harrelson, Elizabeth Banks and Stanley Tucci were virtually absent in this one. Tucci was merely a passing cameo and Banks only reappeared to say farewell. Not even Haymitch’s advice was that memorable or entertaining. Merely regurgitating what we already knew. He literally just disappeared into the background. Shame.

The media or PR team led by Natalie Dormer added absolutely nothing to it at all. If anything, it made me question the relevance of them altogether by the end.

However, it wasn’t all bad. Jennifer Lawrence was superb yet again. The film took a much darker turn than I expected and there were a few shockers in the closing half hour. BUT what didn’t help matters was that we didn’t see half of them. It was merely implied or reported back to us by some extra. Infuriating after all the build up that things were happening off screen.

It killed off a good portion of the tension. There were still some touching moments BUT it came off a little flat and disjointed. I wish there was more of a showdown between Snow and Katniss. I really loved their fractious relationship and their final confrontation was certainly not to be missed BUT somehow despite some revelations, it just didn’t quite satisfy me as much as I thought.

It was also quite sad to see someone else taking a final bow. It may have been some time since his passing but it was a fine performance from Philip Seymour Hoffman as Plutarch. I’m not sure how much of his performance was altered to complete the movie BUT it didn’t spoil the character one bit.

I really do think it will come down to how much of a Hunger Games fan you are. As the credits rolled, a majority of the audience applauded. Guess what part of the audience, I was in. It was certainly watchable and there were some tense and brilliantly acted moments. It is tough to please everyone when wrapping up a series BUT for all the build up and insufferable Part 1 and Part 2, I was a little disappointed and left wanting.

Close BUT no cigar.