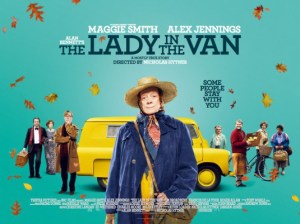 An exceptional performance from a great Dame does enough to save this mixed bag of a mostly true story.

Alan Bennett (Alex Jennings) forms an unexpected bond with a transient woman (Maggie Smith) living in her car that’s parked in his driveway.

After a strong opening with a small glimpse into the past of our mysterious lady in the van, things were put on the back burner and we were subjected to the endless monologues of Alan Bennett.

And that was the problem. There was too much Bennett. I was aware of the renowned playwright but wasn’t really used to his style. The History Boys, being one of the other film adaptations I’ve seen, wasn’t my cup of tea.

Now credit where it’s due. Jennings was very good as the dithering playwright. Once I got used to Bennett’s running commentary, I was able to enjoy it a little more as the film went on. The ‘caught between two minds’ gag (in which we see two Bennetts) was a clever little skit and helped differentiate what Bennett did in real life and what he imagined. His snappy one liners and some of his monologues were actually quite entertaining as he argued and bickered with the lady in the van and himself.

The introduction of the London Borough of Camden community didn’t really bring much to the mix. If anything, they were heavily underused. Especially with the talent at Bennett’s finger tips. Jim Broadbent played the shady retired cooper in his limited role perfectly. He brought some needed suspense and drama to the mix.

Roger Allam and Deborah Findley were probably the only other characters that made an impression as Bennett’s nosy neighbours. Desperate to fish out any little bit of gossip. Frances de la Tour was completely wasted in her role. Dominic Cooper’s cameo was nothing more than an ongoing gag taking the mick out of Bennett’s promiscuity and sexuality. I couldn’t believe how many British sitcom actors popped up in this. Even James Corden turned up as a market trader.

BUT they were always going to fall short to the lady in the van. The iconic actress that is Maggie Smith. Bearing “a vagabond nobility”, the make up team really made her look rough. Her acid tongue and mad rants were hilarious. The outbursts at the sound of music. The exchanges. The looks. Brilliant.

A monster in one second. Ungrateful and using. Hurt and alone the next. Neglected by the church and left to fend for herself. When we finally got to delve into her past, you soon developed empathy towards the cantankerous old bat.

However, the main issue I had with the piece was that there was too much focus on Bennett. As much as it was a semi-autobiographical account; it would help if his life story was interesting. That’s not to say that it didn’t have its moments. Bennett didn’t exactly paint himself in the best light. His reluctance to look after his mad ol’ Mam (A sterling turn from Gwen Taylor) but acceptance of Smith’s squatter on his driveway drew a shocking, but interesting, comparison.

BUT the drama around Bennett soon dragged what was a charming little affair. The ramblings about his plays and the late night meetings with his “friends” was only really funny when Smith’s lady interrogated him. “All these men coming over at all hours of the night. People will think you’re a Communist”.

When Smith disappeared so did my interest. It’s hard when telling a loosely based true story NOT to exaggerate or guess what Smith’s character would have done or said. However, it didn’t really build up to anything that I expected. Her treatment at the monastery was ripe for more drama and confrontation BUT never amounted to anything. Neither did her back story of why she was in the van in the first place.

It was certainly watchable BUT engaging? The closing moments proved why Smith is still one of the best actresses going. The Oscar buzz might be a little premature but it was still a superb performance. The OTT ending didn’t really fit in with the tone for me. I understood why Bennett did this elaborate overture but I still wasn’t a fan.

Funny, charming, easygoing when Smith was involved. Otherwise, it just wasn’t as fulfilling or as entertaining as I expected.