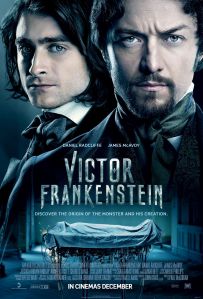 Well, that’s what I thought I was going to say.

McAvoy and Radcliffe take on the iconic mad scientist duo to mixed results. BUT with good acting and some decent special effects, it delivered enough fun for me not to care too much.

Told from Igor’s (Daniel Radcliffe) perspective, we see the troubled young assistant’s dark origins, his redemptive friendship with the young medical student Viktor Von Frankenstein (James McAvoy), and become eyewitnesses to the emergence of how Frankenstein became the man (and the legend) we know today.

Look, this sort of movie was never going to win plaudits BUT if it had the right level of ridiculousness and enough monsters then I’d be one happy bunny. The first hour was actually quite entertaining and reworked the origin story quite well.

Apart from needing a good haircut, Radcliffe played the hunchback perfectly. We follow the poor chap as we watch him being beaten and downtrodden by his circus chums. Daniel Mays (The Bank Job) was completely wasted in his role as the lecherous leader Barnaby. Shame. It zipped along and once Frankenstein made the fold, I was pleasantly entertained.

James McAvoy was superb. Producing more saliva than creatures. Seriously, he got a little too passionate with some of the dialogue. BUT as soon as he made his introduction, he stole the show. His mad enthusiasm, the dry witticisms and crazy theorizing was brilliant. He really carried the piece when things seem to drag (Which unfortunately they did).

The special effects and props were disgusting. A scene involving the real reason behind Igor’s “hump” was enough to put anyone off their dinner. The creatures and animal body parts were fantastic. Their first subject; a spliced chimpanzee was devilishly creepy and created a few problems along the way.

There wasn’t as much gore nor as many monsters as I had hoped. The woes of a 12A certificate but the writers certainly pushed the mark where they could. The CGI was generally eye catching. Apart from the scene (Ironically) involving moving eyes which was just terrible.

The bromance between McAvoy and Radcliffe really made the pair shine. I was happy to watch them bicker, banter and squabble as the experiments become more ambitious. BUT of course, they had to throw a spanner in the works. A spanner in the form of Downton Abbey’s Jessica Brown-Findlay.

The dull love subplot between Radcliffe and Brown-Findlay was pretty bland. The pair do their best BUT I wasn’t interested in them and neither was the director it seemed as it was skimmed over very quickly. If anything, it wasn’t needed.

She didn’t really turn Igor against Frankenstein or add any humanity to him. You felt for Igor from the moment you saw him abused by the circus. But then again, it was never going to be that sort of film. BUT it tragically slowed down the pace and I could feel my mind wondering as the lifeless luvvy duvvy stuff played out.

Andrew Scott (Sherlock) delivered a memorable supporting turn as the depressing and macabre Inspector Turpin. A man hell bent on bringing Victor to justice before the world and God. His ramblings did go on a bit BUT his theological sparring with McAvoy spiced things up.

He was definitely more memorable than Freddie Fox’s (The Riot Club) Finnegan. He was too weak and flamboyant to be taken seriously. He certainly personified a spoilt rich kid with more money than sense. BUT a maniacal mastermind? I feared Charles Dance (Game of Thrones) more in his small cameo as Frankenstein’s father.

The slow motion Sherlock Holmes (Downey Jr/Ritchie) style fighting was disorienting and slowed down the action too much. The film lost its momentum after the 60 minute marker BUT finally (and thankfully) found it again at the 90 minute marker for a deliciously dark and violent finale.

If anything, the finale was a little too quick cut and rushed. I’m sure the literary critics will be shaking their heads at this rehashing of a classic BUT it had enough action, creepy creatures and humour to keep things watchable. The effects on the Creature looked so real. He looked like Martin Skrtel on steroids with a few bolts here and there. Any more violent and they could have kissed that 12A rating good bye. Maybe they should have.

Radcliffe and McAvoy were a dream team. The effects were great. They did just enough to wade through the stocky subplots and overlong pace to make it a watchable little creature feature.