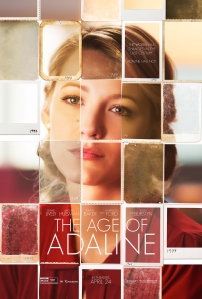 Lively and Huisman excel in an easygoing and endearing love story. Even if you may have seen it all before.

A young woman (Blake Lively), born at the turn of the 20th century, is rendered ageless after an accident. After many solitary years, she meets a man (Michiel Huisman) who complicates the eternal life she has settled into.

The concept is Forever (The recently cancelled immortal drama with Ioan Gruffudd). A freak accident and suddenly a young girl is unable to age. Predictable and a little corny BUT with an enigmatic cast and characters I actually cared about, I was happy to indulge.

Lively (Gossip Girl) delivered a sterling performance and wasn’t too bad on the eye either. What? Come on, ladies. You have Huisman’s torso to look at.

The film goes at an easygoing pace as we flick back and forth through the life of Adaline. The narration by Hugh Ross was okay to begin with. Filling in the blanks as we flash through the early years. Straight to the point and easy character building.

However, the ongoing commentary in every other scene soon got really annoying and a little unnecessary. His detailed explanation of how the lightning strike activated Adaline’s immortality just made the whole thing sound even more ridiculous. Some waffle about a scientific theory in 2035 proving this probability really didn’t help its case. Anyhoo . . .

It wasn’t long before people suspect something’s not right when Adaline hasn’t aged a day at 45. A simple traffic infraction with a local officer soon puts her on the run for the next 60 years! It was good how they tied in Adaline running from the law with the Communist witch hunt that consumed America in the 50s.

The paranoia, the questions, the reason why she stays living a life of secrecy but never truly living. She still has to make secret rendezvouses with her own daughter who has to pretend to be her grandmother. Yes, just like Forever. Ellen Burstyn (Interstellar) and Lively worked well together. To be honest, I would have been happy to see more of their relationship. Not enough of Burstyn.

We join Adaline as she is preparing herself another identity and a quiet peaceful life. That is until Ellis Jones arrives on the scene.

Huisman and Lively have fantastic chemistry and make the inevitable luvvy duvvy stuff that much more bearable. Huisman (Game of Thrones) was charismatic and made some of the cornier chunks of dialogue that bit more bearable. I don’t mind watching a couple inevitably get together as long as it isn’t too OTT and the characters are not irritating. So well done to the pair of them as we see Adaline desperately trying to turn down the advances of a man who is transfixed.

The courting ensues while the chemistry bubbles. Adaline finally lowering her guard. That is until (Not again!) she meets Ellis’ father, William. An old flame from her past.

Harrison Ford was brilliant. A return to form for Solo. He played the melancholic moper well. It certainly spiced things up as William refuses to accept that Adaline is a mere relation. The flashback sequences with younger William and Adaline melded with the present worked well.

Anthony Ingruber. I couldn’t believe how much he looked like Harrison Ford. It was uncanny. Did they have a good make up artist? CGI? If Lucas was considering bringing back the Indiana Jones franchise than look no further.

Amanda Crew (Sex Drive) was the only actress that I was disappointed with. But that was because her role was so unmemorable. If anything, her character wasn’t really needed. Other than to be another player in a family game of Trivial Pursuit. A shame.

Everything comes to a head and ends oh so predictably. BUT it was endearing, highly watchable and wasn’t the worst way to kill a couple of hours. Just don’t think too much into the not ageing thing because the explanations just made the plot hole even worse.

A great cast and great chemistry makes this one to give a go.