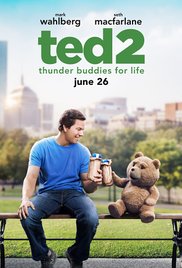 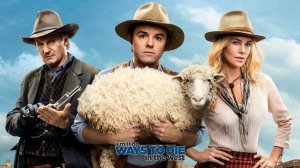 A Million Ways to Die Laughing! Unfortunately not. MacFarlane takes on the Wild West and comes out more battered and bruised than his heroic counterpart. Applying his Family Guy spiel, this cowboy comedy yields mixed results this time round.

Now for the record I am a big Family Guy fan and thought Ted was a return to form from MacFarlane as Family Guy teetered on lacklustre but watchable.

His second feature to hit the big screen and a western. My hopes were high. The trailers signed me up from the get go. Job done as always. However, it seems a case of ‘best bits in the trailers’ syndrome. Now don’t get me wrong, it’s not all bad but it’s not all great either.

The main issue, two hours? Too long. It was only after the first 30-45 minutes that the film got into its stride. The story line is hardly original, merely a rehash of a classical western storyline. Probably one of the reasons why westerns are no longer plaguing our screens.

Local coward finds bravery and confronts nastiest gunslinger to win the town and the girl. Yadda, yadda. I really hoped for a demented Blazing Saddles but only got mildly hot flip flops. The lovely Charlize Theron and McFarlane were fantastic together. Good chemistry. You could see where they were improvising which made the banter all the more entertaining.

However, the main jokes and punch lines are few and far between. The bigger, better gags have been heavily advertised to get you to watch this mildly entertaining affair.

Seth MacFarlane’s rants felt, at times, like nothing more than him trying to do improvised stand up. Some parts fall flat on its backside, other bits bring the odd laugh. His speech on the law and order of the town was very good; “There is the mayor. He is dead”.

MacFarlane manages to carry enough charisma to keep his stocky character going. The funniest moments in the film for me were the unexpected blink and you’ll miss it cameos, containing the likes of Ewan McGregor, Ryan Reynolds and . . . my God, two brilliant cameos that were nearly worth the ticket. I won’t say for once.

Cameos you would have expected from MacFarlane but still manage to surprise and get a laugh.

Considering the number of musical montages in Family Guy, there is only one song and dance number. An irritatingly catchy one, at that. A missed opportunity in my opinion. I kept expecting Mr Conway Twitty to appear. Alas to no avail. Of course not literally as the poor man passed away some time ago.

I admit I did have to check Google on that. My bad.

In all fairness, the supporting characters bring the better jokes but they are barely in it. You feel that they are brought in to help the slackening pace or when MacFarlane and Theron have stopped messing around.

Neil Patrick Harris (How I Met Your Mother) was very funny as the mustached lothario Foy with his ridiculously cringeworthy but hilarious pun based insults.

It was great to see Liam Neeson as the villain. Unfortunately he plays it very dead pan. So serious, in fact that his character is just a stocky and highly unmemorable clichéd cowboy killer. I expected at least a Taken parody or something. Nope. At least he didn’t try and do an American drawl again after Seraphim Falls.

The same could be said for Amanda Seyfried who was nothing more than a bland caricature used as a plot device to spur our protagonist. Shame. A joke about her eyes brought an unexpected titter.

Sarah Silverman and Giovani Ribisi were hilarious together. However, they are only resorted to a drawn out gag about having a prostitute as a girlfriend and not sleeping together before marriage as it is not very Christian. The gag gets a little stale but the characters were funny enough to warrant more screen time than they got.  Inevitably, there would be a meeting with the Indians, I mean, Native Americans and a certain taking of various substances, leading to a trippy and surreal sequence that reeked of desperation, more than creativity.

Inevitably it all ends very . . . predictably which leaves you somewhat disappointed (if it hadn’t already).

It’s watchable at best. But I have later series of Family Guy for that. It kills the time, brings the odd laugh but hardly must see viewing. If you are looking for a laugh out loud rowdy riot of a western in the style of Mel Brooks’ Blazing Saddles, then I recommend . . . Blazing Saddles 2.5/5 for me.