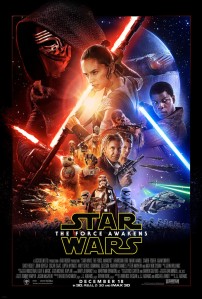 Was the force strong with this one? Was this the sequel I was looking for?

In a nutshell, hype help it did NOT.

It was always going to be tough to follow on from such an iconic trilogy (Episodes IV, V and VI) BUT it was still an enthralling and promising effort from J.J. Abrams. After the successful Star Trek reboot, I had full confidence in the director to continue George Lucas’ legacy.

As soon as those infamous credits came up, “A long time ago in a galaxy far, far away . . .” and that iconic John Williams score boomed through the surround sound speaker system, this film nerd bellowed a Wookie cry in rejoice.

It was hard NOT to get that buzz and excitement as the plot scrolled up the screen into nothingness. Thankfully, there was no dense mumbo jumbo about taxation. *Cough* Phantom Menace *Cough*

Three decades after the defeat of the Galactic Empire, a new threat arises. The First Order attempts to rule the galaxy and only a ragtag group of heroes can stop them, along with the help of the Resistance.

Don’t worry. I will do my utmost NOT to spoil anything. Promise.

I always went out of my way to avoid getting into the Star Wars films. BUT the force was too strong. I couldn’t resist the score, the characters, the very world that Lucas capitulated.

The humour, the action, the corny exchanges. Thankfully they were all still there. It probably helped that Abrams teamed up with Star Wars scribe Lawrence Kasdan (The Empire Strikes Back/The Return of the Jedi. Ugh. Those Ewoks. Man oh man).

The introduction of several new faces spiced up the mix. John Boyega (Attack the Block) and Daisy Ridley (Mr Selfridge) were worthy additions and certainly held their own.

Oscar Isaac’s (Ex Machina) Poe wasn’t in this enough. His quick witted one liners reminded me of a young Han Solo. BUT after making an impressionable introduction, he was largely absent. Shame.

Ridley was superb. It was a breath of fresh air to see a female heroine after following Luke and Anakin. She carried the film and was a likeable protagonist. Boyega was very good as troubled trooper Finn. Come a long way from Attack The Block.

We also had a new villain in the form of the mysterious Kylo Ren. Channelling his inner Vader. I was transfixed. That was until the chap took off his helmet. Sorry, Adam Driver (This is Where I Leave You). I can see why that Emo Kylo Ren Twitter account exists. His isolated conversation with Vader’s broken helmet was haunting.

Domnhall Gleeson (About Time) also delivered an underrated performance as General Hux. By the end, I was more entranced with him than Ren. Rivalling Peter Cushing’s Grand Moff Tarkin as the creepy underling. His unsettling Hitler-esque speech made the hairs stand on the back of my neck.

However, the biggest scene stealer was the adorable android BB-8. Hilarious. I’m sure a lot of people will be wanting to buy one of these little bots. I know I want one.

Of course, the heavily flogged trailers revealed the return of some old faces. It was great to see Han Solo and ol’ Chewie. They were fantastic and haven’t changed a bit. Perfect. Harrison Ford was on fine form. Showing the newbies how it’s done.

Believe it or not, this really will be down to how much of a Star Wars fan you are. Go figure. If you’re anything like me, you would have already had your Star Wars marathon. The Good (Episode V), The Bad (Episode II) and the Ugly (Episode I).

If you haven’t then I would highly recommend that you don’t. As much as Abrams and Kasdan changed a few things, introduced new faces and brought back the old ones, there was only so much you could do with the story arc.

The closing act felt like one enormous retread of Episode IV: A New Hope. Different characters doing the exact same thing with the same end result. Predictable and frankly a little disappointing.

It didn’t help that the pace got increasingly patchy as the film carried on. A drawn out bar sequence with Maz Kanata (voiced brilliantly by Lupita Nyong’o) certainly didn’t help matters. The force waffle went on too long and I couldn’t help but think of Madge from Benidorm while Kanata spoke. Anybody else see it? Nope?

I knew that Episode VII was going to be a continuation BUT I was still expecting more. Maybe it was a case of hype being a hindrance after setting the bar so high. Don’t get me wrong, it was a vast improvement from Episodes I and II. I know some of you will say, “Well, that wouldn’t take much”.

BUT as much as Abrams and Kasdan tried to create a little mystery around the old faces as we wondered what had happened in 30 years, it was pretty easy to piece together.

Carrie Fisher was wasted in her role as Leia. Gutted. I couldn’t make head or tail of what Andy Serkis’ (The Lord of the Rings) Supreme Leader Snoke was supposed to be.

The pace tested. The plot was disappointing. BUT I was still happy to be taken back to that crazy universe and once I saw a particular piece of space junk take flight, I was beaming from ear to ear.

An enjoyable enough romp and a welcome return for a franchise. BUT if there is to be more, retread old ground we must NOT.