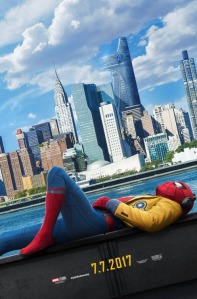 Spidey’s back! Third reboot’s the charm?

Several months after the events of Captain America: Civil War, Peter Parker (Tom Holland), with the help of his mentor Tony Stark (Robert Downey Jr), tries to balance his life as an ordinary high school student in New York while fighting crime as Spider-Man as a new threat, the Vulture (Michael Keaton), emerges.

I was furious when I heard that Spiderman was being rebooted yet again. I grew up with the Maguire movies and thought he was the best Spidey. Plus he gave us all these incredible shots. I mean, come on . . . 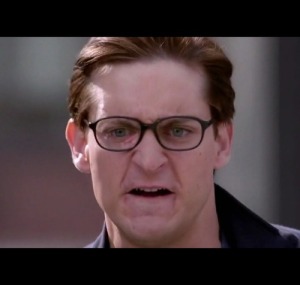 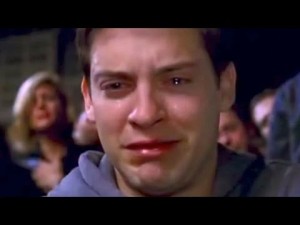 Although I tried to watch the 2002 entry (15 years?!) the other day and thought it was pretty cringe inducing watching a bunch of people in their mid-20s to 30s pretending to be 16. Yikes. It already felt dated and far too corny for its own good. While Spiderman 2, on the other hand, is still fantastic.

I liked Andrew Garfield BUT felt the Amazing Spiderman movies did more damage to the franchise than Spiderman 3. Especially Part Two. Dreadful doesn’t come close to expressing my disappointment with that movie. Shame.

Civil War was one of the best Marvel movies. Surprisingly, the biggest scene stealer out of the ever-growing and incredibly talented cast was . . . Spidey himself. I was really impressed with Holland’s cameo. So much so that I was actually looking forward (and dare I say excited) to watching Homecoming.

So after that rambling prologue, did Holland deliver on his first full feature debut?

In a nutshell, he didn’t disappoint! Good fun all round!

The energy and quick witted humour was cranked up to 11. Holland’s fast talking and rampant energy was a much needed injection to a franchise (I feared) couldn’t be revived.

The opening didn’t mess about. It set up the baddie, brought in the hero and got down to business.

Homecoming was an origin movie without being one (if that’s possible). We didn’t have the spider bite. We’ve had 5 movies (and a vastly rich comic book backlog). We all know how he got his powers. And just in case, you didn’t; a passing comment was enough to suffice.

The producers have done their homework. Using the predecessors as a base to explore unmarked territory. Hardly a spoiler BUT there wasn’t even another soul destroying Uncle Ben killing back story.

If anything, this felt like, as Stark so rightly put it, “Spiderman in training wheels” mode. A much lighter effort.

The humour was fantastic as Spiderman tried to help his neighbourhood. Rescuing stolen bikes, giving people directions and swinging around the city. All to the beat of a cracking soundtrack.

The high school melodrama was a little tame for me. Watchable and fun BUT I want my superheroes battling something darker than popularity and a high school crush.

Zendaya was funny but her role felt a little unnecessary and out of place. Jacob Batalon was the scene stealer as Peter’s nerdy partner in crime, Ned. The clumsy duo delivered some of the better laughs.

Marisa Tomei wasn’t in this as much as I hoped. I always liked the relationship between Aunt May and Peter. They didn’t really get any proper screen time until near the end. Despite some nice moments, there are some things we don’t mind revisiting.

It helped having Tony Stark popping up as Parker’s mentor. The dynamic worked on so many levels; giving an extra depth to the pair. Parker with his naïve and eager determination to do more and Stark finally opening up and showing that he’s more than a mega rich ego-centrist.

I didn’t really have much time for Jon Favreau’s chauffeur Happy in the Iron Man movies. I thought it was a little pretentious for the Iron Man director to get in on the action BUT he really delivered as the miserable babysitter. His droll demeanour and frustration worked perfectly with the super peppy Parker.

The special effects were fantastic. A nail biting action set piece involving the Washington Monument left me feeling queasy. I’m not that bad with heights BUT even that sequence gave me vertigo. Bleurgh.

3D was a waste of time. BUT if you’re thinking of seeing it in 4DX, I would heavily recommend. Just don’t see it on a hot summer’s day. Trust me, you’ll be praying for Keaton’s Vulture (Steady now). Only if it’s just for the fans to come on. Phew.

He was brilliant. Chewing up the scenes. Not enough of him. I felt his performance and gravitas was wasted on the wrong villain. After having the Green Goblin (Willem Dafoe’s NOT James Franco and DEFINITELY NOT Dane DeHaan’s Green Goblin!) and Doctor Octopus, the Vulture fell short by comparison.

Keaton was only really let loose in the chaotic finale. His “Walk away” speech with Parker was tense and unnerving. Perfect. I wanted more of that.

The pace did lag as we reached the 105 minute marker and I felt the final showdown with The Vulture was drawn out and a little repetitive with one agonizing explosion after explosion. The CGI and camera work was incredibly disorienting as the pair spiralled around in the night sky.

Holland delivered a stellar turn BUT I found, at times, his running commentary irritating. Now, I never read the comic books (Sacrilege! I know) BUT was Parker always so chatty that he came off as a mad teen with ADHD? Just a small grumble. I mean come on. He’s 15 with superhuman powers.

Despite its flaws, Homecoming was still a fun ride as Peter come to terms with the scope of his abilities and the morals of justice. With Holland at the helm and this production team, there’s still life in Spidey yet. And I can’t wait for more.

AND . . .  Of course, there is a post credit teaser. It’s a Marvel movie. Be PATIENT and the wait pays off.