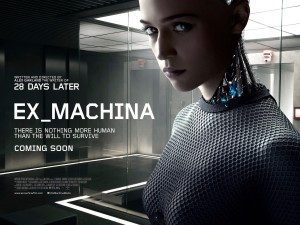 It may be a little mechanical in parts but it’s certainly not one for the scrap heap.

A ha . . . Anyway. Finally a film that didn’t make me question the purpose of my cinema pass.

A brooding, atmospheric and suspenseful thriller that ponders the existence of artificial intelligence and the very essence of life.

So what’s it all about? A young programmer (Domnhall Gleeson) is selected to participate in a breakthrough experiment in artificial intelligence by evaluating the human qualities of a breathtaking female A.I. (Alicia Vikander)

Brought to you by the guy who penned 28 Days Later and Sunshine. Now to me, I instantly had high hopes. I loved both. To some, there may be doubts.

The premise is hardly original but it’s take is certainly a breath of fresh air.

It does sound a little pretentious. And in parts it can be but it’s all helped by an original script and a small (No seriously. Four actors) but talented up and coming cast.

Domnhall Gleeson has been on the radar for some time featuring in such hits as About Time and Unbroken. He proves once again why he is one to watch. He plays the geeky programmer with aplomb and delivers his lines with an impeccable accent.

What I loved about the opening was how quick cut it was. It didn’t mess around or linger unnecessarily. Just straight to business. It set the tone, the pace and got the story going. Main character. Situation. Bang, bang, bang.

The cinematography by Rob Hardy was outstanding. Especially with the breathtaking panoramic landscape shots as Gleeson’s Caleb descends upon the Jurassic Park-esque compound of the reclusive genius Nathan (Isaac).

Oscar Isaac was brilliant as the eccentric inventor. A scene stealer at every chance. A chameleon with a tough poker face. Isaac is certainly banging on the door with his performances; Inside Llewyn Davis, Two Faces of January and A Most Violent Year.

As soon as “Day One” flashed across the screen, the game begins. A suspenseful, haunting voyeuristic journey into madness.

When Caleb is first introduced to Ava (Alicia Vikander), it makes for slow burning but engaging viewing. The pair sharing pleasantries and sussing each other out. There is great chemistry between Gleeson and Alicia Vikander.

She will certainly be one whose face you will have to get used to. Appearing in several future releases and one current (Testament of Youth); Seventh Son, Son of a Gun, Man from UNCLE.

However, if her performances are anything like this then I won’t be complaining. And no! That is not because she is a naked Swedish robot who has stolen my heart (What?)

The tension begins to bubble as the days count down. Strange things happen around the enormous techno compound. Unexplained power cuts that automatically lock every room. CCTV footage on every TV channel of Ava.

An air of unease and suspicion shrouds the house (and the film). The paranoia beginning to rear its ugly head.

This certainly kept my attention for the majority of the film as I tried to suss out what was really going on here.

The debates between Caleb and Ava made interesting points and certainly pondered the question of what is real? Can a robot feel? Judge what is right and wrong. Their chemistry igniting more and more.

The only issue is that with all the conversations, the slow burning pace and the beautiful landscapes, it does go on a little bit.

I could feel myself kind of wanting Day 7 (it occurs over a week) to reach it’s finale a little quicker.

It’s almost Kubrickian. The long sweeping shots, the hallways. God, the endless hallways. No creepy twins in this one. Only a sultry Japanese robot servant named Kyoko (Sonoya Mizuno). Alluring one moment, unsettling the next.

Garland even goes for a bizarre encounter involving a choreographed disco routine that really showed Nathan’s eccentricity (and that Isaac can dance). He also delivered the best retort I’ve heard in some time.

An angry Caleb storms in and asks why Nathan tore up something. His response? “I’m going to tear up the dance floor, dude.” Brilliant.

The finale was a little predictable but how it come about still surprised me and left me nodding my head in approval. That can’t be said for a lot of films these days.

I don’t want to divulge too much as I would like you to give this a gander.

The special effects were very good. The detail on Ava and Kyoto was remarkable. No over-indulgence on the CGI which made them look a lot less cartoony and more realistic.

I mean that could be down to the fact this had a much smaller budget but always a plus in my book in this day and age of relentless, OTT animation.

It’s certainly a dark broody affair. If you’re expecting fast action and bang for your buck with sexy robots, then watch I, Robot or Transformers but if you want a little bit of philosophical sci-fi then give it a go.

It’s not perfect. A little long at the tooth but engaging enough.

A step in the right direction.