Just as ridiculous as the film title but bloody good fun all the same.

Imprisoned, the mighty Thor (Chris Hemsworth) finds himself in a lethal gladiatorial contest against the Hulk (CGI’d Mark Ruffalo), his former ally. Fighting for survival and racing against time, Thor must prevent the all-powerful Hela (Cate Blanchett) from destroying his home and the Asgardian civilization.

When I first heard the director’s name (Taika Waititi), my first thoughts were: “What a strange name” and then I actually did some research and couldn’t believe my luck. 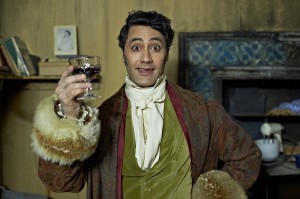 Count Viago from What We Do in the Shadows?! (A heavy recommendation if you haven’t seen it already). I should have known what to expect.

One mad rollercoaster ride of hilarity, neon, colour and 80s fusion, of course.

Marvel have really hit their stride (*cough* DC *cough*) and seem to have a winning formula.

To be honest, I wasn’t really impressed with the first Avengers movie or Captain America (What?! Sorry) BUT I loved Kenneth Branagh’s introduction of Thor. The Shakespearean King Lear melodrama between the feuding brothers. Hiddleston, Hemsworth, Hopkins, Portman. Perfect.

Thor: The Dark World was a mixed bag. Failing to deliver the right balance of laughs and drama. I was intrigued to see what tone Thor’s third outing would take. The more comical route did have its flaws BUT I was too busy having fun.

And there were still some touching moments (as well as revelations) to be had between Thor and his father Odin (Sir Anthony Hopkins).

Even if it was a little sillier and the story line a tad predictable, Waititi and co made up for it with memorable characters, stellar turns, humour and heart.

It’s hard not to mention one actor, in particular when praising supporting characters. I’m sure you’ve seen the endless memes, gifs and tweets.

You can’t help but smile at the guy. His larger than life bohemian approach fitted the role of the Grandmaster perfectly. My only grumble? He wasn’t in it enough.

Tessa Thompson was fantastic as the embittered Valkyrie. Disillusioned and drinking her sorrows out of a bottle. Her stubborn demeanour worked well off the confused Thor.

Cate Blanchett lapped up the role of Hela with aplomb. Despite being pushed into the background far too much; she still managed to make a stern adversary to the Viking god.

Karl Urban (An underrated actor) was hilarious as Skurge. Just wait until he introduces his accomplices Des and Troy. Brilliant.

I was getting a little fed up of Loki and Thor’s fractious fraternal relationship. But this latest foray forced the pair into an uneasy alliance and somebody must have heard me because there was even a gag in which Thor tells Loki that he’s waiting for the next betrayal. A running gag that delivered in buckets.

It helped that Hiddleston and Hemsworth worked well together yet again.

Only kidding. Well, not entirely. Waititi even managed to give himself a little cameo as the bumbling bouldered bad ass that was Korg. He had me in stitches. Stealing every scene he featured in.

Anyway, the real duo that made it for me was Thor and Hulk. I loved the dynamic between them. I haven’t really rated Hulk’s multiple reincarnations (Sorry, Team Bana all day) and was unimpressed with Ruffalo. THAT WAS UNTIL Ragnarok.

He nailed Banner and brought a little character and humanity to the green giant.

The only problem with bringing new characters into the mix was that somebody had to take the hit. The absence of Portman and Dennings was missed and Idris Elba was reduced to measly filler sequences. Don’t get me wrong, he still bossed it BUT a waste of a character and an actor.

I will commend how all the silly little clips, that hardcore Marvel fans have endured begrudgingly through endless credits (thanking everyone from the make up assistant’s make up assistant to the chap who brings the coffee), have finally come into play. Most notably with a caped dimension bender (Probably not the best description).

This installment has certainly kept things fresh and fun and spiced things up for the upcoming projects.

Despite my nitpicking, I wasn’t bored. It was entertaining, if a little silly in places BUT had everything you could expect from a big superhero movie. Mad action, fantastic effects, great characters with the right injection of fun.

*How could I forget to commend the soundtack?! I will amend that error by leaving this classic track that welcomed our favourite Norse God to the mix. Enjoy!

Woah . . . what the hell did I just watch? This shit just got BIBLICAL. Stupid one liners aside, a rather strange viewing experience. One that I’m not sure whether I enjoyed. Arguably Hollywood taking on the Bible is always going to get mixed results. However, that is not always the case. Examples such as Ben Hur, The Ten Commandments, The Prince of Egypt (what? Don’t judge me) are exceptions to the rule. Now credits where it’s due. The film excels with its special effects and the cast do their best with the material at hand. Now understandably that material is the Bible. Now I’ll be looking at this primarily as a film text. I’m not an atheist nor am I a believer as such. To be honest, I thought both the idea of a world created by a “Creator” and an entire universe created by a “big bang” because a thing called science said it was so, equally ridiculous. But hey everyone’s entitled to their opinion.

I digress. However, the film is full of questionable plot holes that intentionally and unintentionally pokes holes at the Old Testament itself. Now be warned there will be SPOILERS! Not the Bible bits, certain film sequences. I will try and be as cryptic as possible and as objective. Now obviously the premise we all know, in a world ravaged of sin, Noah is given a divine mission: to build an Ark to save creation from the coming flood. The opening sets up the background of the origin story of . . . us, really. Most of it, I knew. Other parts I had forgotten. Russell Crowe is a powerhouse actor and he provides a stellar performance. My main quip is his representation. Now Darren Aronofsky’s previous works have always been . . . out there. Pi, Requiem for a Dream, The (mind numbing) Fountain, and the more mainstream but surprisingly entertaining Black Swan. Aronofsky has pretty much made Noah as mainstream as possible. However, he transforms a man torn between fulfilling his duty to his Creator and the livelihood of his own family, into a demented maniac hell bent on achieving all means regardless.

Even more bizarrely, while the world is ravaged with sin, yadda yadda, a group of fallen angels are left to roam the rocky desolate landscapes. Now this part I was not aware of. The fallen angels are brilliantly designed, even if they look like Sloth from the Goonies had mated with one of the rock things from the Never Ending Story. And I couldn’t believe the talented voice cast behind them; Nick Nolte, Mark “Breaking Bad Tio Salamanca” Margolis and Kevin Durand (Real Steel and LOST). The crazy fight sequences between them and the monstrous human race desperate to board the Ark was entertaining if completely ridiculous. Aronofsky managed to convey more emotion and sympathy out of them than a number of the cast. Sir Anthony Hopkins manages to make a memorable impression in the limited screen time of the minor role of Methusaleh. It did have me pondering if Noah was allowed to save his family, why not his grandfather? Punishment for not being able to get the human race to conform and follow the righteous path? However, he was bonkers and wondered off a lot. To be honest, the supporting cast were strangely passive until the hour mark. The film was very much on the shoulders of Crowe. It was only when the humans in the area finally caught wind (come on, we’re better than that) of the Ark that things pick up, making for a tense, racy, riotous sequence. The visual CGI with the animals and the infamous flood are fantastic.

Douglas Booth (Romeo and Juliet) was highly unmemorable and passive as Shem. Logan Lerman (Perks of a Wallflower) and fellow co-star the beautiful Hermione, I mean, Emma Watson played their parts well and when given the time to shine, delivered solid performances. Jennifer Connolly (Labyrinth, always) reunites with Crowe (A Beautiful Mind) and manages to make a nothingy character stand out, especially in one tense if undeniably bizarre sequence that understandably might be where the controversy is coming from. The pair work well but fail to reignite that Beautiful Mind spark. Ray Winstone, I thought, was wonderfully gritty and gruesome as self proclaimed King Tubal-cain. Now it’s all down to how much of a Winstone fan you are. But I was pleasantly surprised and he stole the scene every time. For once, his grizzly growling was used to his strength. If you want to show the humans as nasty pieces of work, Winstone san. Once the Ark ascends, it all gets a little slow and drawn out. A slow burning if entertaining hour does not a good film make. And after two hours this film does test your resolve, if not for a tense finale.

NOW SPOILER TIME! AVOID IF YOU ARE CONSIDERING WATCHING THIS MOVIE! FOR THOSE WHO AREN’T FUSSED OR HAVE SEEN IT. CONTINUE READING THIS PARAGRAPH. Noah does everything to the letter for the Lord. He saves the animals and his family have the unexpected blessing that their son’s (well I would have assumed) wife is pregnant. Fantastic. Oh no, no. no. The human race must be no more. Which means the baby can be no more. If it is a boy, no probs. Can’t reproduce. If a girl, watch out. A compassionate hero becomes a demented mad man with one click of a finger. Unexpected? Yup. Watchable. Strangely so. Necessary? Ah, there’s the rub. Cue the time on the Ark as we wait nine months for the child to be born. Ray Winstone’s sneaky stowaway king plotting revenge for nine months? How did no one know he was on there? Also they made a herb that could knock out animals, how come it didn’t knock them out? A herb that would make them sleep for nine months? Without food or water? I mean, it’s a film but surely they could have had another trippy dream sequence in which the Lord told Noah to use said herb. I don’t know.

Visually ambitious, brilliantly acted, if drawn out, OTT, and questionably full of holes. However, this ark should manages to stay afloat, just. 3/5