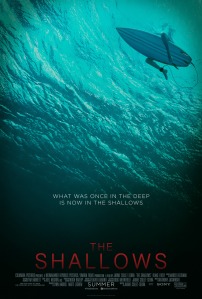 Blake Lively in a bikini and a ridiculous CGI’d shark – what’s not to like?

A mere 200 yards from shore, surfer Nancy (Blake Lively – Gossip Girl) is attacked by a great white shark, with her short journey to safety becoming the ultimate contest of wills.

Jaws, this ain’t BUT once you cut through all the cheese, there lies a tense nail biting thriller that delivered everything I expected from the abomination that was Open Water.

An ominous opening involving a mangled helmet and some Go Pro footage certainly got the ball rolling. BUT that was soon hampered by Lively’s introduction. She did her best with the character and thankfully there wasn’t too much of her nauseating “I’m an American traveller in Mexico” spiel. Some guff about her visiting the same beach where her mother found out she was pregnant. Corny, I know.

It was easygoing enough as Lively’s Nancy set up on the shore and the location . . . My Goodness. Flavio Martinez Labiano’s beautiful cinematography really captured the beauty of Australia. *Cough* Sorry, “Mexico”. The clear blue oceans depressed me. The sun, the sea, the beach. I need a holiday. So inviting BUT of course, Nancy won’t be surfing alone.

The surfing scenes were actually quite good. I can never get enough Lively in slow motion (What?). BUT it was a little naff watching a stunt woman rip the tides with Lively’s badly CGI’d face. Yikes. I could feel my patience wading. 20 minutes in and no sign of our fishy friend?

Instead, we had Nancy challenged by two other surfers (I forgot their names. Let’s call them Shark Bait #1 and Shark Bait #2) and an argument over Face Time with some poorly placed multi-screens. It did give a much needed depth to her wafer thin surfer girl and there was a little more empathy behind the real reason for her cheesy quest.

And for the next 60 minutes, I was hooked. A game of wits against one of nature’s oldest and deadliest predators. Lively held her own and carried the film when the pace dropped. A little disappointing considering the film was only 86 minutes. BUT it got me jumping out of my seat, fidgeting uncomfortably and biting my nails off.

A nightmare situation if ever there was one. Stumbling into the feeding ground of a giant Great White Shark. Hell to the no.

Injured, afraid and left on a pile of rocks with only a few hours until low tide. The make up effects were pretty good as Nancy used her earrings to suture a gaping leg wound. Her medical student/patient mono-logging may have been a coping mechanism BUT it got on my nerves.

Thankfully she had a companion in a CGI’d seagull. Steven Seagull. No, seriously. That’s the bird’s name.

With no help coming (or being teared to pieces), Nancy takes desperate measures. Timing the the cycle that our foe takes. 32 seconds to swim from one rock to a rotting whale carcass.

I have to say that the CGI’d creature was a little hit and miss for me. It didn’t really spoil the experience or suspense BUT there were moments where I would have preferred the old mechanical monstrosity that drew Spielberg to scream profanities in Jaws.

BUT every time a fin rose to the surface, I was wincing. The seconds on our heroine’s timer running out. The closing act was frantic and nerve wracking. A final showdown on a bobbling bouy delivered a fitting homage to the ultimate shark movie. NO! NOT Sharknado.

The Shallows carried that fun B-movie feel BUT didn’t push things too far. Even if sirens went off when a flare somehow set a good portion of the ocean surface on fire.

I didn’t expect to get caught up in it as much as I did and even if the CGI left little to be desired, it was a still highly watchable and tense little thriller that is a must for the underwater horror junkies.