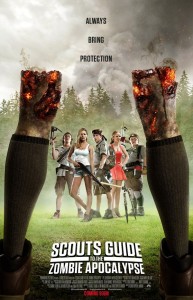 Three scouts, on the eve of their last camp-out, discover the true meaning of friendship when they attempt to save their town from a zombie outbreak.

You knew what you were getting yourself into from the crazy opening sequence with Blake Anderson’s janitor (Workaholics) singing away to Iggy Azealia’s Black Widow while a zombie outbreak was brewing in a lab.

It was a brave move to have a virtually unknown cast running the show BUT the lads certainly delivered and will be ones to watch for the future. The feeble story line was a little predictable and formulaic. The camp fire shenanigans and petty squabbling about high school and quitting scouts was a little boring. BUT once the undead entered the mix, things got going and I was sniggering to the end.

The pace zipped and there were some genuine laugh out loud moments. A scene involving a zombie and a trampoline delivered an unexpected and outrageous gag. This was very much in the crazy style of Zombieland BUT the best way to sum up Scout’s Guide would be “If American Pie was a zombie flick . . .”

Tye Sheridan and Halston Sage’s (Paper Towns) love subplot was weak. If anything, I thought his character was going to hook up with Dumont’s sexy tomboy stripper (Sorry, cocktail waitress). So there was one surprise. Dumont may have stole my heart (What?) BUT Joey Morgan was definitely the main scene stealer as the over enthusiastic Augie.

The gore was brilliant and used quite inventively. Especially in the stripper club slaughter scene. Miller’s Carter using a bottle to smash in a zombie’s skull, only for the blood to pour out of the bottle neck and spill all over his face.

The biggest star that I could clock in this mad little zom com was Anchorman’s David Koechner. He certainly delivered as the deluded scout leader with a strange obsession for Dolly Parton. It was just a shame that he was reduced to only a few scenes.

It may have been in the same vein as Zombieland BUT it fell short by comparison. It was never going to match my favourite zom rom-com Shaun of the Dead BUT it certainly didn’t deserve the low Metacritic rating and panning that it has received.

Funny, mental, if a little flawed and predictable BUT fun. I think this one was unlucky to get lost in the SPECTRE and Hunger Games buzz. Shame. Definitely worth a watch for a quick laugh.