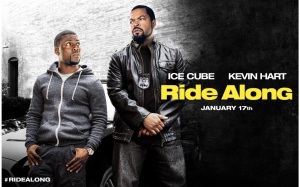 Chug along? Cube and Hart make a cracking good duo. Fun enough BUT will it compare to the relentless list of cop comedies?

Security guard Ben (Kevin Hart) must prove himself to his girlfriend’s brother, top cop James (Ice Cube). He rides along with James on a 24-hour patrol of Atlanta.

A mixed bag. It all starts off very predictable, formulaic and unfunny with a deal gone wrong, an inevitable car chase and Cube tearing the place up. He played the straight faced Payton perfectly. BUT beneath the bravado there wasn’t much to his character.

A groggy start (with a feeble story line about infiltrating a crime ring and a rat in the office) is given a fresh boost when Hart is thrown into the mix. His military style precision on a Call of Duty style video game under the alias Black Hammer had me in stitches alone. I’ve been a fan of Hart for some time ever since the Scary Movie films. It’s great to see how far the little man’s gone.

He pretty much steals the show. His verbal diarrhea and high pitched screeching can get a little irritating. Inevitably, it took a little while for Ben and Payton to warm up to one another and the gags were few and far between. I could feel my excitement dropping quicker than Cube busting out a fresh freestyle.

Once the pair got going (Luckily) so did the film. There was a fantastic scene at the shooting range in which Hart is trying to show off. His feeble attempt blowing up in his face . . . literally. They did their best and it’s not a complete write-off. Hart upsetting a biker gang and picking a fight with a child. Brilliant.

Being held up in a warehouse in a battle of wits. Done to death. They had a nice angle with the Training Day parody but never really took full advantage of it. Maybe the 12A rating softened it all up but more could have been made. Hart being thrown about was only funny up to a point. He’s little. We get it. It got a chuckle. BUT doing it several more times? Come on now.

I liked the chemistry between Hart and Tika Sumpter (Salt). I would have been happy to see a little more of that than Cube’s stone cold expressions. Pardon the expression. BUT it was great seeing Cube keeping it dead pan with Hart coming out with all sorts of crazy stuff. Brilliant.

I was surprised to see the likes of John Leguizamo and Laurence Fishburne in this BUT they struggled to make a real impression with their dull and unmemorable characters. And that’s part of the problem. The terrible plot about a generic arms deal with the “surprise” twist being some predictable double crossing stretched the film out. It left little opportunities for gags and wasted a good cast.

When it was funny, it was on fire but when it’s wasn’t, it was slow and repetitive. Less Ride Along and more chug along. Hart was the man. I just wish he’d had better material. It did just enough. But if you’re looking for a consistently laugh out cop comedy, check out The Heat.

Cube and Hart did their best. And it did enough to get me excited for the upcoming sequel. Let’s hope they make amends with more gags or a better plot. If you’re up for a laugh, give it a go. Just don’t expect too much.