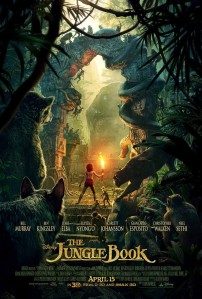 Okay, it wasn’t as bad as that feeble pun. BUT now I have your attention. Disney take a trip back to the jungle with mixed results.

After a threat from the tiger Shere Khan (Idris Elba) forces him to flee the jungle, a man-cub named Mowgli (Neel Sethi) embarks on a journey of self discovery with the help of panther, Bagheera (Ben Kingsley) and free spirited bear, Baloo (Bill Murray).

I was hardly surprised when I heard that Disney were going to reboot the classics. A sign of the times that even the best were running out of ideas. However, I really enjoyed Kenneth Branagh’s lavish adaptation of Cinderella (What?). If the rest of the classics could deliver the same standard then my doubts would happily be washed away.

BUT not even this perfectly cast and visually stunning little reboot could take on the king of the jungle that was the original. It was certainly watchable and (at times) even enjoyable BUT something somewhere along the line was missing.

The rapid and incredibly disorienting opening didn’t get things going for me as Sethi jumped from one badly CGI’d tree to another. Desperately praying for the sequence to stop.

Sethi delivered an impressive debut and captured Mowgli perfectly. He couldn’t look any more like his Disney counterpart if he tried. His whining and insufferable commentary did grate against me in parts BUT that always did with the original.

I liked how writer Justin Marks shook up the story structure. It was a breath of fresh air. NOT all of it worked BUT a change nonetheless. A lot more time was spent with Mowgli and the wolf pack. It gave more depth and allowed a better connection between Mowgli and his “mother” Raksha (Lupita Nyong-o/Star Wars: The Force Awakens).

BUT maybe a little too much time was spent on that dynamic. Things perked up when the feral feline Sher Khan appeared. I was on the fence with Elba’s initial introduction BUT he killed it by the fiery finale. His gravelly undertones bringing the sinister CGI monster to life.

The animation and detail on the animals were superb. The jungle was captured in all its colourful glory. The watering hole sequence was a sight to behold.

The rest of the story pretty much followed along the same lines as the classic. It’s easy for me to make comparisons between Disney movies when I never read the original source material from Rudyard Kipling.

Kingsley was everything I expected. A perfect Baghera. He wasn’t in it enough. Scarlett Johansson nailed Kaar. Her strangely alluring and seductive voice doing justice to the role. She even managed to keep the “Trust in Me” rift. Didn’t quite go into the song which was a shame.

It was always going to be a tough act to follow the iconic Phil Harris. The voice that heralded several Disney favourites; O’Malley the alley cat, Little John and (of course) Baloo the bear. I couldn’t think of anybody better than Bill Murray to give it a crack. He was hilarious. Even if his grumbling may have reminded me of another another animated favourite. A certain fur-bag that loved lasagna.

The pace did test in times and the whole thing was a little too cheesy for my liking. BUT what did I expect from a family film? And even more so, a Disney one? As much as I got a little smile out of hearing Murray sing ‘Bare Necessities’, it almost didn’t fit in with the tone of the film.

I couldn’t believe that Christopher Walken was voicing the King-Kong sized King Louie. The monkey mafioso angle was a different touch. His singing was a little hooo-oooo-ooooorrendous. BUT fair play to the chap for giving it a go.

It was easygoing fun BUT for every little change, I felt a little piece of the charm that made the original such a classic melt away. There were no Beatle-esque vultures. No elephant soldier marches. Just a load of pretentious guff about the elephants being the Gods of the jungle. Really?

The man village angle barely scraped the surface. If anything, it wasn’t needed. It was only brought into the mix for “the red flower”. Sher Khan’s real agenda. The power to make fire. It certainly delivered a strong environmental message about the damage of wildfires and the woes of man on nature BUT it just wasn’t enough.

To be honest, I had the same gripes with the Charlie and the Chocolate Factory remake. When I have little sprogs of my own, I wouldn’t want them to watch the Michael Jacko/Johnny Depp reboot, I’d grab the Gene Wilder classic any day of the week. If you asked me the same question about the Jungle Book, I’d still be reaching for that animated 1967 classic.

Don’t get me wrong. It killed the time. There was fun to be had and you will certainly keep the little ‘uns at bay. Depending on big a Disney fan you are will probably determine how much you’ll love this.