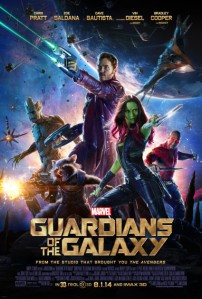 I would have thought after numerous Marvel entries and the fear of milking this rich cow dry, this may have pushed the mark.

I mean, another origin story to introduce another group of characters BUT with this cast and these characters, I’d be happy to see more entries like this again very soon.

Now, the plot is hardly original, the inevitable union of these intergalactic criminals was always going to happen, as well as those pesky sequel teasers propping up all through the film.

BUT what makes this sci-fi blockbuster hit tick all the boxes for the me is the pace, the humour and the fantastic soundtrack.

After a strong and emotional opening with 1occ’s I’m Not In Love playing, I knew I was in for a treat. It helps that the cast are perfectly chosen for their roles.

What’s it all about? Now keeping it vague as I don’t want to spoil this as I want you guys to see this . . .

Light years (in a galaxy far far away. No. Stop it) from Earth, 26 years after being abducted, Peter Quill (Chris Pratt) finds himself the prime target of a manhunt after discovering an orb wanted by Ronan the Accuser (Lee Pace).

The charismatic Chris Pratt, already on a roll after the mega blockbuster hit that is the Lego Movie, applies his laidback, fast talking schtick to the film’s protagonist Peter Quill to perfection.

You knew what to expect from the moment he breaks into a song and dance around a space cave using a mutated lizard thing for a mike.

Zoe Saldana just proves she looks incredibly hot as any alien or anything for that matter (What?) but is also fantastic as Gamora.

The surprise turn for me was Dave Bautista as Drax. Now let’s be honest, I know he’s had acting experience in WWE but this is a whole different playing field and I wasn’t convinced with his jughead performance in Riddick.

It helps to have great lines at his disposal but Bautista’s delivery is brilliant as the eloquently spoken if utterly stupid henchman. He takes everything literally which makes for some funny one liners and memorable moments.

The animation and detail on Groot is impeccable. I mean don’t get me wrong, Diesel’s conviction on saying “I AM GROOT” numerous times is good and no doubt an iconic one liner but come on?! Cooper is fantastic as the talking volatile raccoon hybrid Rocket.

Now while the animation is impeccable, 3D . . .  Not so much. It’s certainly more prominent BUT not a must.

Lee Pace and Karen Gillan were almost unrecognizable both by their incredible make up and by their accents as the villains in this space opera.

Michael Rooker (Gunn regular) was great as Yondu Udonta, the interstellar smuggler. The only problem with so many characters and such a big cast, some characters or actors (more specifically) get cast aside.

Glenn Close, sporting a funky haircut, as Nova Prime was wasted in this installment.

John C. Reilly, the comedy legend that he is, only really got to get a bit of meat to chomp on in the closing minutes.

Djimon Hounsou was only memorable due to a humorous encounter with Quill in which he attempts to enforce his self titled nickname, Starlord.

Peter Serafinowicz (Shaun of the Dead)’s straight faced pallor had potential . . . BUT didn’t really get used. BUT that’s minor quibbles.

Now it’s hardly an origin story. It briefly provides a minor back story to answer the questions (as and when they pop up) to give a little dimension to our lively crew.

As it drew to its exhilarating finale, I found myself wanting more. There were unanswered questions which left it all open for more mischief.

Little teasers and “if there’s a sequel” hints . . . BUT with the wide array of characters in this universe and great music and great dialogue, I’m happy to strap in and go for another ride across the galaxy again.

Of course, they will return. One of the better ones.

P.S. There is a little teaser at the end of the credits but I don’t think it was worth waiting around for. Nothing to quack home about. I mean, shout.