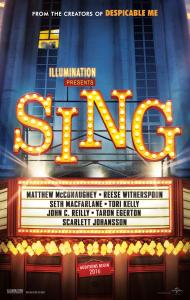 In a city of humanoid animals, a crafty koala’s (Matthew McConaughey) attempt to save his theatre with a singing competition becomes grander than he anticipates even as its finalists’ find that their lives will never be the same.

I don’t know why the family put this on (considering our youngest is now 23) but I’m glad they did. A much needed tonic after all the hard hitting super serious Oscar flicks.

The cast were fantastic. I actually didn’t believe that all of them sang. I skimmed through the credits to double check (and for the awesome soundtrack listings).

Of course, a killer soundtrack is crucial in a singing competition and Joby Talbot selected some great choices. I did NOT expect to hear a chimp singing Elton John’s I’m Still Standing.

Or open the show with Kanye West’s Flashing Lights. Seriously, I wanted to revisit the albums on my iPod right there and then BUT I digress.

Matthew McConaughey nailed it as the bumbling Buster Moon. Desperate to save the theatre that his father bought him and spurned his love for the arts. Swindling and squeezing every penny he could.

Until that wonderful light bulb moment. A singing competition. With a cash prize. However, one silly typo from his scatty secretary Judith and that strapped for cash prize changed from $1,000 to $100,000!

It was silly BUT entertaining fun that left me smiling. Funny, charming and one for the whole family.

You could argue that all the characters were loosely strung together around the American Idol style competition. BUT you could relate to them all in one way or the other.

Reese Witherspoon was brilliant as Rosita, the frustrated pig housewife desperate to break free from her hum drum routine. I knew she could belt out the tracks. Let’s not forget she won an Oscar for Walk The Line.

Any excuse for Seth MacFarlane to belt out the Sinatra tracks and he’s there. Always slipping a croon-sesh into Family Guy whenever he can. He marvelled as Mike the mouse. The mini street hustler out to earn a quick buck.

My future wife (I hear she’s divorced now) Scarlett Johansson nailed it as Ash, the punky porcupine desperate to sing her own songs instead of the generic tripe that everyone keeps forcing her to play or her moronic boyfriend’s metallic nonsense.

Her reaction when Buster suggested she sang Carly Rae Jepsen was great!

I couldn’t believe Eddie the Eagle could sing. Taron Egerton continues to surprise. He was brilliant as Johnny. The kid chimp desperate to break away from the life of crime to become a singer.

Peter Serafinowicz (Shaun of the Dead) was on top form as Johnny’s mobster monkey dad (appropriately titled) Big Daddy. Completely oblivious to his son’s desires and determined for one last score.

I wasn’t familiar with Tori Kelly. Only that she had a duet with Michael Buble once. BUT she had one hell of a voice and played the part of Meena, the stage shy elephant perfectly.

I know, an elephant with stage fright. The mind boggles.

The animation was excellent and there were genuine moments where I laughed out loud. All I’ll say is car wash. That and a nervous buffalo with flatulence.

It’s corny, cheesy BUT easygoing. A lot better than the disappointingly droll Trolls.

It did the job and killed the time.