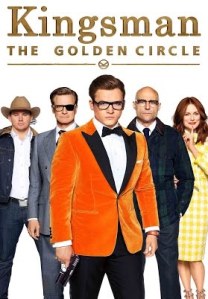 When their headquarters are destroyed and the world is held hostage, the Kingsmen’s journey leads them to the discovery of an allied spy organization in the US. These two elite secret organizations must band together to defeat a common enemy.

The Kingsman are back BUT better? Well . . .

It would help to watch the first one. BUT if you haven’t, it’s not the end of the world (Although YOU MUST! It’s rather bloody good) as quick plot points are skimmed over anyway.

I mean, my mind drew a blank in the opening sequence as Charlie (Who? Thankfully there was a quick flashback) ambushed Eggsy (Taron Egerton) in a mental cab chase punch up.

I was a little anxious with the frenetic opening. It was too chaotic and, dare I say, silly for my liking. The frantic camera work, the over-indulgent CGI, I feared the worst. The soundtrack was on point though as Eggsy and Charlie punched the living daylights out of each other to Prince. Nice.

BUT once the pace settled down and the humour kicked in, I was still happy to be caught up in this crazy mess.

Egerton ran the show yet again and carried the film (when it tragically dragged).

Julianne Moore had a tough act to follow after Ssssssamuel (One for the Kingsman fans) L Jackson’s stellar turn in Secret Service BUT she played the psycho Poppy really well. If anything, I was disappointed at how small her screen time was.

Beneath the smiley Desperate Housewives persona lied one twisted individual. Don’t eat a burger from her. That’s all I’m saying.

I liked the idea of the Statesmen. The Kingsman’s American cousin. All the satire ripe for the picking. BUT after a fun introduction and some punny wordplay on their operative names; Tatum, Berry and Bridges were all left watching from the side lines. By the end, I wondered why they even bothered. Shame.

Colin Firth was a welcome return. Even with his ridiculous (but surprisingly plausible in a “Kingsman” way) revival. A much needed presence. The camaraderie with Eggsy was the heart of the first movie.

His presence made up for some of the messier parts of the movie. The only problem was that once Harry was back, Merlin was designated to Q status. A shame as up until that point; Mark Strong (The Brothers Grimsby) had been on scene stealing form. Benched (with the majority of the Statesmen) right up until the explosive finale.

My main quibble with The Golden Circle was that where the original got away with poking fun at James Bond (and the spy genre in general); this really did take things up to 11. A bit like Kick Ass 2. Funny, messed up BUT pushing its luck.

The middle act dragged and a reconnaissance mission at Glastonbury took the biscuit for me as Eggsy “planted” a bug into a model’s (Poppy Delevigne – Yup Cara’s sis) orifice (Nope, you read that right).

Now don’t get me wrong, the original wasn’t perfect. And to say, this sequel was silly by comparison is . . . silly in itself.

Especially when you had Sofia Boutella’s lethal Pistorius blade combination, Jackson’s blood phobia and THAT church scene . . . (My God! Pardon the irony) I will never listen to Lynyrd Skynyrd  in the same way again!

I just wasn’t caught up in it as much this time around.

Bruce Greenwood’s cameo as the President of the United States was mental. He reminded me of a similar world leader (with no concept of empathy or thought. Make of that what you will). His unique hostage negotiating skills spoke volumes.

BUT the real scene stealer was Sir Elton John. The Rocketman was bloody hilarious. He really didn’t give a damn, wasn’t afraid to poke fun at himself and was surprisingly agile for an ailing musician 😉

Despite the relentless CGI, the malingering pace and some mad plot holes, K: GC was still crazy fun with some entertaining and delightfully bloody and visceral action sequences.

A fun time filler if nothing else that won’t disappoint Kingsman fans too much.