An ancient Egyptian princess (Sofia Boutella) is awakened from her crypt beneath the desert, bringing with her malevolence grown over millennia, and terrors that defy human comprehension.

To be honest, the opening act didn’t mess about. It quickly set up the premise. Flicked back and forth from one ridiculous explosive set piece to another. Cruise’s cocky Indiana Jones just about got away with it. I mean, fair play to the 55 year old for still throwing himself about and jumping across rooftops.

I really hoped Cruise and Jake Johnson’s (New Girl) pairing would have worked better. Johnson’s incessant yelling did my head in. Especially in the frenetic opening Iraq shoot em up sequence.

I just wanted him to shut up. Thankfully his swift exit was a pleasant relief.

No scarab beetles?! No Omid Djalili screaming like a banshee? (What?) Camel spiders and rats? Really? Meh.

The tone was all over the place. Too stupid to be funny and NOT dark enough to be a real horror.

The 1999 Stephen Sommers blockbuster and The Mummy Returns were perfectly balanced. They played the right level of cheese, humour (John Hannah, come on!) and let’s not forget that tongue in cheek horror.

The less we say about Tomb of the Dragon Emperor, the better. Let’s not forget there was a reason why the franchise got rebooted in the first place.

The problem with this reboot was that I couldn’t stop making comparisons to the Fraser flick. On paper, swapping the dynamic around (Making the Mummy female) and modernizing it actually had potential BUT it failed to offer anything new.

Arnold Vosloo was a sinister presence. A creepy adversary (And no, let’s not mention the horrifically CGI’d Scorpion King).

Boutella did her best with the role BUT her lines were dull and she spent too much time in the background.

Annabelle Wallis (Peaky Blinders) was far too serious and annoying for her own good. Rachel Weisz (my first screen crush. Don’t know why I thought I’d share that) was irritating but had her charm.

Plus it helped that there was actual chemistry between her and Fraser. No matter how nauseating it got in the Mummy Returns (Fans, am I right?)

There was zero chemistry between Cruise and Wallis. Replacing smouldering tension and friction with playground insults and more yelling.

Ben Seresin’s cinematography was fantastic to look at. The visual effects were impressive BUT not memorable. It was going to be tough to top Imhotep’s smiling face in the sandstorm.

There were some good points (Really?). The make-up and effects were impressive. The creepy zombie soldiers and their Dementor style death kiss was a nice touch. Soul kissing the life out of people in the background while Cruise and Wallis continued to bicker and highlight enormous plot holes.

Johnson worked at lot better when he popped up in Nick’s (Cruise) subconscious. The bathroom encounter had a creepy American Werewolf in London vibe to it.

Cruise’s comical crusty corpse church punch up had me in stitches. BUT it just didn’t quite have the fun of O’Connell’s crypt chase.

Despite the vacuum sized plot holes (Seriously who brings a hostile ancient evil right to the very thing she is seeking. Face palm. Duh!), the writers really missed an opportunity with Russell Crowe.

He lapped it up as Jekyll. He lifted every scene with the right level of flamboyance. The exact thing needed to keep a silly monster movie like this entertaining.

And he was only in it for 15 minutes. Sigh. Even if his Hyde impression was a little Ray Winstone incarnate with some messy panda eyes. Seriously, let’s make him Crowe look evil. Smear some runny mascara over his face. That’ll do it. Did they run out of money? 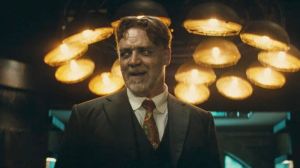 Normally you can bank on Cruise to deliver a big popcorn movie. And he makes this mess watchable. He was just lucky that Alex Kurtzmann threw enough chaotic smash em grab em to hide what a mess this really was. BUT I didn’t expect too much and I’ve seen a lot worse for the ratings this film has received.

A mess BUT a watchable one. At least. Fraser fans may be left fuming BUT if you want a frantic time filler with enough bang for your buck, it won’t do any harm. Just don’t expect too much.

As I watched, the more it blowed. Now childish sulky comments aside. Another found footage “horror” film graces the big screen with cheap scares, poorly acted, badly written characters and a laughable premise. I’ve said it before and I’ll say it again, the found footage film genre has died a death. MAKE IT STOP! The Blair Witch Project brought something new to the horror genre. Over-hyped to the max but suspenseful and tense. Paranormal Activity resurrected that format and made it a hit yet again.

But surely movie producers must have realized by the endless sequels that followed from Paranormal that the format was being milked dry. Look, I’m an old school horror nut. The Shining, The Exorcist, Psycho managed to haunt me. While these feeble attempts at “horror” if you can call it that, on the other hand, are laughable. Well, I can laugh. It doesn’t cost me anything but at 10 quid a ticket, it’s not good enough.

From the opening shaky handheld selfie shot, I could feel my head shaking. Here we go. Our posh toff archaeologist Scarlett (Perdita Weeks – Channel 4’s The Promise) explaining everything she is doing, killing all mystery and suspense. The opening sequence was pacey but the camera work was that shaky and erratic, I couldn’t see what was going on. It was giving me a headache . . . and the camera work as well. The jumpy moments merely equating to loud bangs and screams to make sure the audience are still awake after mind numbing exposition.

It all felt like a ridiculous Indiana Jones crusade. The Mummy through the eyes of Omid Djalili with the scarab beetle in his head. That is how frantic the camera work was. I never heard so many horror movie cliches in one opening scene; “Let’s split up”, “I have a family”, “I must complete my fathers work”, oh and the infamous “Don’t go in there”. It was certainly different with an Iranian cave demolition chase but as the film slowed down (boy did it), we are subjected to none other but a quest for the Philosopher’s Stone. No, you read that right.

You’re a wizard, Scarlett. A boring fable on Nicholas Flamel dragged the film further and further. Did they not watch or read Harry Potter? You could have nicked a quick synopsis and got to the catacombs so much quicker. I could feel my eyes drooping. Our lead heroine waffles on about degrees and Egyptology waffle. Credit where’s it due; the cast do their utmost to try and make it interesting but my word . . . Dull.

Ben Feldman. Why would you leave Mad Men for this? Your first film post Mad Men and it’s this? A cliched character with a “dark past” spewing cliched tripe with an inevitable and corny romance brewing him and Scarlett. It was all so tedious. I thought I was watching a straight to DVD sequel of National Treasure. All the historical mumbo jumbo was there. There was one cool but highly ridiculous trick involving a tablet, cleaning fluid and a lighter. We need ammonia. Conveniently while breaking into a church, the janitor has left all the chemicals and lighters your heart could contend. Brilliant!

When we finally get into the catacombs (after 40 minutes), there are moments but that is being generous. When the camera man gets trapped in a tight crevice (Come on, we’re better than that), it was done quite well as he struggles and wrestles through a passage decorated with bones. For any claustrophobic, a nightmare scenario. But unfortunately, I’m not claustrophobic. There is no tension. Random characters get bumped off left, right and centre without any background, interest or concern. Suspense. Naff all. Loud noises and screams may make me jump out of my seat but what do you expect when the story has put me into a coma, near enough.

Feldman’s character with a dark past who constantly keeps reiterating that he will not go down into the catacombs; inevitably gets pushed down into the cave and what is his big secret? He’s CLAUSTROPHOBIC! Why didn’t he say that in the first place? Idiot. Oh my God, it felt like something out of a comedy sketch. The final 15 minutes certainly took it up a notch with a mad dash for survival but it felt like a terrible mish-mesh of the Death figure from Ingmar Bergman’s The Seventh Seal wafting around and brooding in a chair, demented statues that were ripped off from the Doctor Who angels popping out of no where and the frenetic first person POV (that was brought back and done so much better in REC and REC 2) rearing its ugly head in an act of desperation to keep us hanging on the end of our seats.

For me, I was already on the end of my seat getting ready to leave. This only made me want to watch The Descent. A film that I felt at the time was incredibly flat and over-hyped but in comparison to this monstrosity, at least that succeeded in suspense and real scares. The ending of As Above So Below was a surprise. But it only established how ridiculous and stupid this film really was. If you are after a claustrophobic cave horror film, invest in The Descent. Hell even the second one. Just not this.