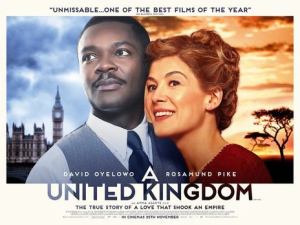 Two stellar turns and a surprising true story makes this one to watch.

The story of King Seretse Khama of Botswana (David Oyelowo) and how his loving but controversial marriage to a British white woman, Ruth Williams (Rosamund Pike), put his kingdom into political and diplomatic turmoil.

The film chugged along at an easy going pace as the couple first met and the inevitable romance ensued. Dancing the night away and playing jazz LPs.

It wasn’t long before Seretse revealed his royal bloodline and put Ruth in an impossible position. I really felt for the pair as they suffered abuse, judgement and ridicule from their friends and family. And that was just from Britain!

Danny from Spooks has come a long way. I’ve always found Oyelowo an underrated actor BUT if he keeps delivering performances like this, it won’t be long before he bags an Oscar.

That speech alone with the kgotla (a public meeting, community council or traditional law court of a Botswana village) was something else. Goosebumps. You really felt for him. A man torn between the love of his life and his duty to his people.

“You belong with the whites and even they don’t want you”.

In all fairness, you felt just as much for Ruth as she faced public scrutiny on both continents. Even the South Africans refused to help her during a particular difficult period of her pregnancy after collapsing in the shanty town.

I couldn’t believe the red tape and hypocrisy of it all as Seretse battled exile and banishment by the British government from his own country.

And who better to play the slimy hypocritical British bureaucrats than Draco Malfoy (Tom Felton) and Norrington from Pirates of the Caribbean?! Jack Davenport was particularly brilliant as the delightfully smug diplomat Alistair Canning.

Accusing the pair of sabotaging the plans of the British Government. Plans that involved illegal mineral digging!

There was a decent supporting cast at the helm. I couldn’t believe ol’ Rodders Nicholas Lyndhurst was in this as Ruth’s intolerant father. Laura Carmichael (Little Edith from Downton Abbey) played the shy little sis well.

It helped that Oyelowo and Pike had fantastic chemistry as Seretse and Ruth’s relationship was put to the test. The racial tension could have been cut with a knife. I couldn’t believe how many times Seretse was called back and forth to Britain to stand trail for his exile leaving a heavily pregnant Ruth struggling in Botswana.

I was mortified at how Churchill (Well, his “advisors”) handled Seretse’s situation. Promising to send the troubled king home if the party won the 1951 election; only to banish him from returning home after winning office.

Of course this is a drama and you have to take the facts with a pinch of salt. BUT this story made me want to know more.

I was engrossed and engaged. There was even a little lump in the throat when Seretse missed the birth of his own child and had to talk to his baby over the phone. The tide turning as Seretse’s uncle publicly shared his disapproval of Ruth. Demanding that he abdicate.

Everything riding on one speech. One last chance to prove his dedication to his wife, to his uncle and his people. It was a nice touch in the closing credits when archive footage was shown of the pair.

I can’t believe this nearly slipped my radar. I’m surprised that there wasn’t more of a buzz around this film. Shame.

It wasn’t without its imperfections BUT you can’t fault an endearing and wonderfully acted little drama. Worth your attention.