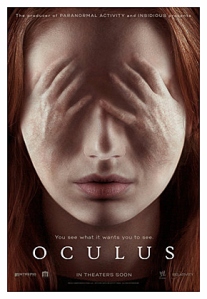 Oculus no scaro. What a shame. An intriguing premise that fails to deliver, revealing nothing behind its glassy surface and turning out to be just as wooden and lazy as the film’s antagonist.

I think I’m going to have to throw in the towel with horror movies. Not that I haven’t already. I was at least intrigued to see a new horror film that wasn’t using handheld cameras or being a “found footage” film, which Hollywood has succumbed to these days. Endless entries of Paranormal/Blair Witch rip offs. If something is good, copy it and milk it until it’s dry. Rant over on that little one. However, this felt like an old school horror film. Back to basics. Suspense, actual acting and well . . . we had one out of two, so not bad.

Gillan (Doctor Who) does her best with the material but it’s all so boring and unintentionally laughable, even with her flawless mastering of the American accent. The premise of Oculus is pretty much about a woman trying to exonerate her brother, who was convicted of murder, by proving that the crime was actually committed by a supernatural phenomenon. That phenomenon being . . . a manipulative mirror. Another film to go on the list of bad killer mirror movies. Is there even a good one? Minus Snow White . . . at a big push.

Now when dealing with a mirror that has managed to survive by its own defence mechanisms for centuries by manipulating time, space and god knows what, there is only one tragically irritating outcome which kills any intrigue that this film desperately tries to convey. Gillan and Brenton Thwaites play the siblings hell bent on destroying the antique foe as well as they can. The flashback structure didn’t work too badly as we go back to their childhood when their father (Rory Cochrane – Right At Your Door) first brings the mirror into their household.

Inevitably strange things start happening. The odd jumpy moment. Two I can recall. A creepy looking woman loitering around the office. The only thing that is annoying is that any suspense or tension built up is soon crushed by the fact that this is a replay. We know that the kids live to tell the tale . . . so far. However, when we go back to the children grown up; all they are doing is being pranked, at times, quite darkly by the mirror.

Annalise Basso and Garrett Ryan do a sterling job at playing the young Kaylie and Tom. To be honest as the madness ensues with the Gillian and Thwaites siblings, I couldn’t help but feel that maybe the film would have been stronger, sticking with the kids story line alone as there was enough suspense and moments to keep you at least stop complaining at why they didn’t just smash the damn thing. However, that is finally demonstrated and explained later on.

There was one laughable moment in which Gillan explains how many victims the mirror has claimed. Okay, I’ll buy it. But endless reports and slide shows turning an initial one minute tension burner into a full blown ten minute crime expose. Droll, boring, we get it. The mirror kills people!

Mike Flanagan tried to break the mould but it still yields the same results, regurgitating the same old typical by the book “scares” or jolts (mine was from my elbow slipping off the seat after nodding off) that leads to the same old monotonous, predictable finale. At one point I was more intrigued by the possessed pony tail of Karen Gillan.

The cast do their best and it was great to see kids that didn’t get on my nerves taking the fold. Katee “Starbuck” Sackhoff does her utmost to play the tormented mother who is at her wit’s end with the medieval mirror menace. But it’s slow, boring, predictable. A couple of watchable moments does not a good film make. Also for the Medium fans, what a waste for poor Miguel Sandoval. A wasted talent in a pointless role. Such a shame. 1.5 out of 5 for me!