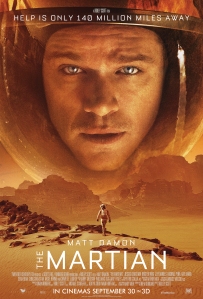 BRING HIM AN OSCAR.

During a manned mission to Mars, Astronaut Mark Watney (Matt Damon) is presumed dead after a fierce storm and left behind by his crew. BUT Watney has survived and finds himself stranded and alone on the hostile planet. With only meagre supplies, he must draw upon his ingenuity, wit and spirit to subsist and find a way to signal to Earth that he is alive.

A return to form from Scott and a stellar performance from Matt Damon makes this space flick one to watch.

For me, Scott’s films of late have not been up to much. They were certainly big, bold and beautifully shot pieces of work. BUT they were either ridiculously over complicated messes (The Counselor) or drawn out affairs (Prometheus).

Luckily, this latest offering had the perfect balance. Dariusz Wolski’s cinematography was fantastic. I didn’t think anyone could make a barren desert planet look so beautiful and deadly with the change of a lens. Superb.

The opening didn’t mess about. It set everybody up and got straight to it. It was tense, frantic and gripping as Watney is left for dead after getting caught up in a violent storm.

I know what you’re thinking. Matt Damon playing a stranded astronaut trying to sustain food and water on a barren planet. NO, it’s not the side story to Interstellar. If anything, it was Cast Away in Space. All that was missing was a volleyball named Wilson.

When telling the story of one man’s survival, it’s crucial that you have the right actor or the movie is ruined. I couldn’t think of anyone better than Matt Damon. He was charismatic and carried the film when it seemed to lull. Every time we went back to NASA, I wanted to see more of Watney.

It was interesting and engaging. I was hooked as we watched Watney battle to survive the next FOUR years from monotonous disco music . . . As well as his tempestuous planetary prison. His video logs were a good touch. Breaking the fourth wall as he explained what he was doing to stay alive. As well as keeping his sanity.

The science behind the crop planting and the water was very clever. You could almost believe that it could happen and be dealt with.

The only problem was that despite Damon’s excellent performance, some of the supporting characters fell into the background and didn’t really make a mark. Most notably in Watney’s crew with Kate Mara and Sebastian Stan.

Jessica Chastain nailed every screen opportunity she got. If anything I wanted to see more of her. BUT this wasn’t her story. Michael Pena did his best to offer comic relief and managed to make a memorable impression by the closing minutes.

Donald Glover, or should I say Childish Gambino, was a surprise supporting character. He seems to have a dab hand at this acting lark as the socially awkward super genius Rich Purnell. Kristen Wiig played the role of the PR advisor well and proved she can do serious acting. A nice change.

Jeff Daniels was a piece of work as NASA director Teddy Sanders. His sparring with Sean Bean and Chiwetel Ejiofor made for heated viewing. One primarily looking at the costs, the others concerned with the man on Mars.

The heavy theorizing and lab debates in NASA and the world did go on in parts for me and took the story away from Watney. And as Purnell tried to explain his rescue plan using two pens, I feared Armageddon story telling creeping out of the woodwork. It was only by the 1 hour 45 minute marker that I felt a little fidgety.

BUT the finale was just as enthralling and nail biting. If anything, it was everything that I wanted from Gravity. A film that failed to impress.

I was rooting for Watney through the highs and lows. This made me want to check out the bestselling novel. A must see and dare I say it. 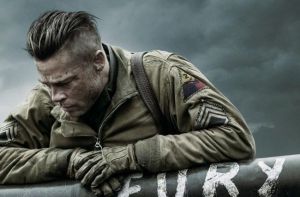 NO! It’s not another Marvel hero origins movie. Although how good would a Nick Fury movie be? Anyway . . .

David Ayer (Training Day/End of Watch) pens a hard hitting visceral war drama with the aid of a stellar cast.

BUT with an overlong running time and a lagging middle act, it falls short of the greats.

It has been a while since we had a war film and within the last two years, we have been rewarded with several. A little resurgence, almost. Not a bad thing at all. The only problem after so many classics (The Bridge on The River Kwai, The Great Escape, The Guns of Navarone to name a few); is the next film that follows merely a regurgitation?

Saving Private Ryan and the equally brilliant Band of Brothers certainly broke that mould and proved otherwise BUT in the process left a tough act to follow. And I find it hard not to draw comparisons. The Monuments Men felt old before it even got a chance. A rehashed Dad’s Army with little on laughs and little on drama. Fury on the other hand . . .

“Ideals are peaceful. History is violent”.

Let’s start with the good. You can normally bank on Brad Pitt. And he delivers another solid performance. If you’re expecting Lieutenant Aldo Raine from Inglorious Basterds, you may be left feeling a little disappointed. But Pitt certainly brings a charismatic character to life in his expressions and posture alone.

Where Ayer excels is in the little things; the impact the war has had on the soldiers psychologically. Of course, Ayer shows the level of chaos and destruction that has been brought to Germany as the Allies make the final push. An opening sequence in which we have nothing but silence as a German soldier rides a horse over a field of fallen men was both haunting and harrowing.

Ayer makes an interesting commentary on the human condition. The fact that the soldiers no longer see themselves as human. They are simply killing machines, fighting for survival. The meal sequence perfectly demonstrated this. The scene may have dragged nearer the end and lulled what was a suspenseful and tense encounter but the point was still crucial.

Lerman played the part well as fresh meat Norman Ellison, a typist who has been called up to help in the final push. The juxtaposition between him and Collier (Pitt) work brilliantly. His quick lessons of war by Collier hit home.

The meal sequence was a perfect comparative piece as Collier (Pitt) and Ellison (Logan Lerman – Percy Jackson) attempt to have a moment of normalcy in which they sit at a table to have a meal with two German women. The rest of team inevitably crash the party. It was a perfect statement exemplifying that war changes everything and everyone.

That normalcy is weakness but where it was interesting at first, it dragged on far too long. Jon Bernthal (The Walking Dead) was demented but also quite irritating as his character continued to yammer. Where I felt compassion for the man, I soon prayed for a bombshell to get him off the screen. Terrible to say for such a film.

Shia LaBeouf (Transformers) was an unexpected surprise. After all the controversy surrounding his personal life and the rumours going around about his “method acting”; one particular rumour being that he actually pulled out one of his own teeth to get the feel of the character, he gave a good (and quite normal) performance.

The action was brutal, graphic and violent. It made a change to have a tank warfare film (I can’t recall too many tank movies in particular). The set pieces in which the tanks battle against each other were brilliantly executed.

The claustrophobia and pressure of fighting in a tank was captured perfectly. Ayer allowed for some moments of camaraderie between the rag tag team of misfits and showed how in sync they had to be to survive attack after attack.

To be honest, I was happy to see more of that. The only problem is that the more explosions and battle sequences we got in the second half of the film, they seemed to mesh into one continuous sequence and what didn’t help is that some of the characters didn’t really shine as much as you anticipated. You felt empathy because of what they were fighting for but otherwise . . .

Michael Pena (End of Watch) was highly unmemorable merely repeating other character’s lines and stating the obvious, “That’s five against 300”. A shame considering how talented an actor he is. Bernthal’s indecipherable yammering did my nut in and after a while LaBeouf’s preaching prattled on a bit.

The ending was tragically predictable which is a statement in itself as how many outcomes can there be in a war? I will certainly not forget what those men went through but will I remember this film? I mean Saving Private Ryan had an array of characters with such a simple story line but it had me engrossed, routing for them.

Fury caught my attention but I could feel my eyes wavering over that watch again.

The set pieces are good, if a little repetitive. The cast do their best if their characters are not as rounded as you would hope. Ayer delivers a visceral, if overlong, war drama but it didn’t quite hit it off for me.