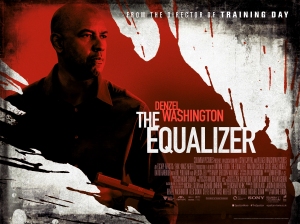 The Equalizer or Man on Fire 2 (if Creasy chose retirement and decided to work in a DIY store) proved one thing. That Denzel Washington is still very much the man.

He provides yet another powerhouse performance proving why he is one of the best actors going. But I fear he may have taken too much on with this one.  Normally you can bank on Washington to carry films that (on paper) may be a little lacklustre but this really did test me.

Washington’s presence certainly makes this just about watchable but it’s still a disappointing mess reprieved by two good performances and some moments of mayhem.

An agonizing coma-inducing opening did not help matters. We get an idea of Washington’s life in a few shots that should have taken up a couple of minutes not twenty. It meandered along as Washington keeps up appearances blending in and trying to maintain a peaceful (and incredibly boring) life.

It was incredibly clichéd and predictable as Washington banters with the staff. That and a tedious subplot in which he helps his best friend Ralphie (Johnny Skourtis) train for his security guard exam. However, his little improvised dance routine is one I will be busting out the next time I hit the town.

Chloe Grace Moretz (Kick Ass) and Washington worked well together. You felt for her character instantly but the constant café meetings to build up a relationship that was clearly established just further slackened things.

I was waiting for the inevitable incident that would activate Washington to take action. An incident that would put Moretz out of action until the closing minutes when she pops back up as a mere afterthought. It’s surprising to see how grown up she has become but anyone could have played her. Anyhoo . . . By the 45 minute marker. FINALLY things got a little bit more interesting with Washington cracking skulls, taking names and dispensing B-movie one liners.

To be honest, every time he glared and tortured someone, I saw Creasy. The frenetic fist-fighting was a feast for any action junkie. The only problem is that the disposing of unmemorable henchmen was dealt with too quickly.

One niggle that irritated me through this. The Equalizer’s thing was his timing. In one particular scene, he threatens to dispose of the East (Or West. Not relevant) Coast Russian mafia in 16 seconds. Washington does his business in a bloody and incredibly violent fashion. BUT in . . . 30 seconds?

This happens constantly. He says 90 seconds to one person and takes five minutes instead. Is Washington getting too old for this shit? I may not have seen the famous TV series starring Edward Woodward (The Wicker Man) but messing up one of his hallmarks does not bode well.

The final 20 minutes made up for a film that desperately wanted to be cooler than it was. The DIY Die Hard sequence offered everything I expected throughout the film . . . NOT just for the ending. I am happy to wait for the violence and destruction.

BUT only if there is enough story or something going on that’s worth filling in that time. 132 minutes is far too long. The action that was delivered was fast and furious. Washington can most definitely still play the hardened action movie veteran.

He was absolutely brilliant. A worthy adversary to Washington’s peace-keeping protagonist. His lines may have been hammy in parts but Csokas’ expressions and dead pan delivery made him a villain to remember. His presence in every scene created tension and suspense. Something that was much needed.

After commending David Arbour (End of Watch) for his performance in A Walk Among The Tombstones, I found his character in this very dull, passive and generally unnecessary. David Meunier (Justified) made a more memorable turn in just one scene.

I was annoyed that we barely scraped the surface of McCall (Washington)’s past and the only taster we get is a boring encounter with Melissa Leo telling us what we already knew. And Bill Pullman? Remember him? President of America in Independence Day (Or the dad in Casper). A mere chess playing cameo? Terrible.

Washington makes it rain with quality acting, charisma and some fist-fighting, blood curdling violence. Csokas offers a villain that makes up for the lumbering pace. However, all it made me want to do is watch Man on Fire.

It got there in the end but boy, oh boy. If the credits suggested another one in the pipeline, get a better storyline. Or least some more action. Give it a go but me . . . I’m going to get Man on Fire out of the DVD cupboard.

Stunning special effects and 3D trickery does not a good movie make.

Certainly made it watchable BUT with a gushy teen romance subplot dominating an overlong screen time, villains that hardly threatened or entertained and a plot that was nothing more than build up for another inevitable installment, you can’t help but question why they bothered rebooting it in the first place?

Tobey Maguire was an excellent Peter Parker (although he has been subject to some hilarious memes for his infamous face pulling).

When I heard there was going to be a reboot, I was baffled. Why? No need. Just carry on from Raimi and replace the cast if they want to leave. However, Marc Webb’s first installment was actually quite good. For an origin story, it did something that quite a few comic book adaptations don’t and that’s go back to the source material.

Andrew Garfield was a very likeable lead and a cooler, more laid back version of Maguire’s Parker. For its two hour-odd length, I could have happily watched more. My only qualm was that the villain was a little naff and the story was rushed. BUT I wanted to see more. And here we are . . .

An exhilarating (if mental) opener delving into Peter’s parents “accident”, and Spidey dealing with a crime spree, delivered high hopes. Cheesy, watchable and entertaining. BUT that soon spiralled into mediocrity.

Garfield and Stone had great chemistry and were a likeable couple in the first part. Inevitably their chemistry turned out to be more and they’re a real life couple. However, this time, the teen angst and will-they-won’t-they?-back story felt repetitive, tedious and incredibly cheesy. The sort of syrupy stuff you’d expect to see in a Twilight movie.

The way the movie was promoted, I expected something bigger, darker, badder. Bigger? Certainly. Darker? Hardly. The pair do their best and the chemistry was still very much on. BUT it felt because of the teen gossip, Webb allowed a little too much time on them. I mean we had all that will-they-won’t-they? stuff in the Raimi trilogy with Dunst and Maguire. Been there done that.

This was supposed to be a reboot. Doing something different. I know Parker’s torn loyalty between the woman he loves and saving the city was always going to be at the forefront. BUT it felt slapped together. Even the uneasy tension between Parker and Stacey’s dad (Dennis Leary) went nowhere. He just kept popping up, grimacing menacingly.

The visual effects, the set pieces and 3D were fantastic with bits flying out (steady now) all over the place. The camera work as Spidey swung around the New York cityscape was fantastic. However when some of the bigger battles commenced, the CGI got a little much and cartoony in places.

Webb reduced Peter and Aunt May’s relationship to nothing. A shame considering he had Sally Field in the role. Anyone could have played her.

The lovely Felicity Jones (Chalet Girl/Cemetery Junction) was reduced to playing a stocky, generic secretary. The same can be said for Colm Feore (The Borgias/The Chronicles of Riddick). He made more of an impression BUT a nothingy role nonetheless.

The villains, on the other hand, in the words of George Takei, “OH MY!!”

Jamie Foxx did his best with the material. His nerdy counterpart Max Dillon was incredibly weird. If anything he reminded me of Jim Carrey’s Edward Nygma from Batman Forever. His obsession with Spiderman, after a brief life saving encounter, bordered on creepyville.

However, once he transformed into Electro  (Fantastic visuals by the way), he got better. But memorable? The best villain in Spiderman history? Hardly. He came off more like a demented electrolysed Mr Freeze with a sore throat.

Don’t get me wrong. The fight sequences were decent BUT the dialogue and exchanges left little to be desired.

Marton Csokas’ evil scientist came off more like a pantomine villain. Paul Giamatti? What the hell? Legend that he is. His part was incredibly irritating and OTT. A change from his usual roles but really? The money must have been good.

Fair play to Webb for reworking the Osbourns. BUT Chris Cooper was reduced to a passing cameo as Norman. I know we had the talented Willem Dafoe BUT I would have been happy to see his portrayal. At least the origin of the Green Goblin was different.

Dane DeHaan (Chronicle/Kill Your Darlings) wasn’t a bad Harry. He looked shady enough with his slimy grin and slick back hair. BUT even ol’ squinty eyed Franco did a more menacing job. Plus the Green Goblin? Really? Again? I suppose he was one of Spidey’s biggest adversaries.

My main problem was that Spiderman was rebooted for its silly, OTT, ridiculous third installment. BUT this very film did the exact same thing. Bar a redeeming closing act.

I’m fed up of films building up for another one. The film I’m watching should make me want to watch the next one.

Garfield was still a likeable Spiderman that delivered some cheeky one liners. BUT the quick-witted banter was very hit and miss. It was all a little tame (Spiderman light) until the finale. An unexpected twist gave me hope. But it wasn’t enough.

I fear this franchise is heading for Schumacher territory. This ship needs moving into Nolan/Raimi waters or I fear it will sink. Get some better baddies and this reboot might just prove it’s worth.

At its best, watchable guff with some decent visual set pieces. At its worst, overlong, schmaltzy and all done before and much better. This Spidey fan is reaching for his bug spray.