BUT on the criteria of being a fun and entertaining family movie? I came out smiling and that’s saying something.

Now I grew up with the Turtles and was a particular fan of the original 90s movies. Well, the original 1990 movie. The sequels after that were . . . Well, meh. The Secret of the Ooze, oh dear.

Over the years, we have witnessed endless reboots and reworkings that were frankly doing my nut in and when I heard that Bay was bringing them back, I was livid!

I mean he already killed the Transformers franchise. Something that seriously needs to be scrapped.

The trailers gave me hope. They appeared to catch the essence of the gang but their 6 foot gargantuan Hulkesque appearances? Uh oh. But none the less, I went in. A 25 year old with my own gang of miscreants averaging the age of 22.

And I was surprised. Firstly, that there were no kids. All adults. Further cementing the cult status of these iconic reptiles. And secondly, in the film itself.

From the opening introduction, you knew what you were getting yourself into.  A quick explanation of some “scientific” mumbo jumbo about genetic engineering and the inevitable origins of some kung fu fighting critters. Some exposition about a crime syndicate known only as the . . .  Wait for it! The Foot Clan.

Okay, the story is ridiculous. I mean, come on. Any Foot related murders? Really? At least the writers allow the characters to poke fun at the stupidity of it all. A hilarious encounter between Megan Fox (Wowewow. What?) and Whoopi Goldberg (You read that. She’s back . . . in small roles) exemplifies that perfectly as April tries to explain about our heroes in a half-shell (Turtle Power!) to her editor.

Now this is not directed by Bay. It is a Bay produced movie. To be honest, the only thing director Jonathan Liebesmann has borrowed is the special effects, Megan Fox and the wafer thin plot line . . . Oh wait? I can see why the pair have been mistaken.

But Liebesmann and the writers have certainly skipped over the plot holes by filling it with comical scenes, action packed CGI sequences and fun. Something Bay has failed to deliver. Just boredom with overlong running times.

My main qualm was making sure that the essence of the turtles was captured and to that I must commend all involved. The voice cast were spot on. I felt each character was done justice. Some people had found it hard to distinguish between the turtles if not for the different coloured bandanas. I didn’t expect Johnny Knoxville from Jackass as Leonardo. But he certainly brought his gruffy gravitas to the role.

Noel Fisher (Twilight) however . . . TAKE A BOW! He was brilliant as Michaelangelo. Hilarious and instantly loveable. Scene stealing at every possible opportunity. His obsession with a cat playing chopsticks with chopsticks was one gag that did not get old.

The animation was fantastic. The expressions and movements certainly brought the green gang to life.

Megan Fox didn’t do too bad as April. However, just like the Transformers you could feel her character being pushed further into the background as the big guys went to battle. Her insufferable screaming did get a little irritating near the end. It felt like nothing more than a reminder that she was there.

It did feel that Fox was chosen to appease the fan boys of old and new. A news segment in which she must wear yoga pants and pounce on a trampoline said it all about female news anchors and a little about Fox. But she does look a damn sight better without that trout pout now. Anyhoo . . .

Will Arnett (Arrested Development/Lego Batman) was a perfect comedy sidekick and worked well with Fox. Not enough of him and his one liners, to be honest.

I was happy that the whole Raphael/Leonardo fraternal headbutting was breezed over. We had a lot of that in the original 1990 installment. Raphael was always the hot head but we didn’t need to tread through too much old ground.

Tony Shalhoub (Monk) brought some noble gravitas to our favourite furry fighter Splinter. He was certainly not as weak or as feeble as his 1990 movie counterpart. The fact his tail is now a fast moving weapon of its own accord made all the difference. Well, it would have to when he’s dealing with 6 foot muscle bounded turtle teenagers?

But of course, if the others have had an upgrade. That means the infamous sinister samurai Shredder will have one too. To be honest, they seemed to spend so much time on the heroes that Shredder seemed to be nothing more than an afterthought.

An expensive, gigantic mechanical master with several super swords afterthought. A visual threat. It’s just a shame his dialogue is as mechanical as his suit. William Fichtner (Prison Break) made more of an impression as his hammy minion.

Good to see Fichtner back in movies and not giving a stuff. Hamming it up to the max!

The special effects are brilliant. The ice truck chase was hilarious, entertaining and a visual feast for the eyes. However, it does get a little too cartoony by the end and the endless explosions do get a little much. Bay’s influence creeping in?

It kept my interest, had me laughing and to be honest I wanted more. The gang were done to justice. From their elevator beep boxing to spontaneous sewer dancing, they stole the show and are back for business.

Just next time (If there is one) give them a better baddie, a better plot and I’ll be happy to see more of this. 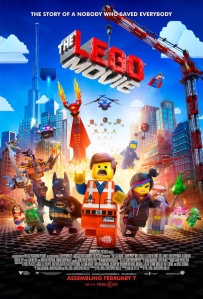 Everything in this is AWESOME. Finally, a fun family movie, not without it’s imperfections, but enjoyable none the less. 3D makes certain scenes stand out but not a MUST. Apart from that, the makers behind the equally brilliant Cloudy With A Chance of Meatballs have assembled a hit.

Basically, the plot follows Emmet (Chris Pratt), an oblivious construction worker who is mistaken for the ‘most extraordinary person’ in all of the LEGO universe, and according to an old prophecy, must defeat the evil tyrant with the best bad guy name . . . Lord Business (That one got a tweet out of Michael Moore), voiced by the legend that is Will Ferrell, who is plotting to destroy the world with his secret weapon, the Kragle (brilliant. When you see what it is). The animation is brilliant, considering it is LEGO. The detail and the fun it pokes at the limited movements of the LEGO pieces is hilarious. The fact they make great expressions with their little black eyes is nicely done and the action pieces although rapid are great to watch.

The cast are fantastic. Chris Pratt is on form as naive dimwit Emmet. Morgan Freeman providing his infamous voice and gravitas to the senial wizard Vitruvius. Will Ferrell grumbling and picking at the craziness of it all as the sinister Lord Business, President of the Octan Corporation . . . and the entire world. Elizabeth Banks as the loveable rogue Wyldstyle who is tasked with protecting Emmet (“Come with me with you wanna NOT die”). However, cudos must be awarded to the supporting characters. Will Arnett’s (The Millers, Arrested Development) LEGO Batman is hilarious. His dark love song being a personal highlight.

Charlie Day (Horrible Bosses) as Benny, the bonkers 80s LEGO astronaut guy (SPACESHIP!). Alison Brie (Trudy from Mad Men?!) as the bi-polar Unikitty, who unhealthily bottles up her negative thoughts and last not but least, “I don’t have much money, but particular skills legend” that is Liam Neeson as the two faced good cop, bad cop was fantastic. Such a surprise to see the huge cast attached to this and that they can all poke fun at themselves. Don’t look at IMDb if you want to guess them.

There was an unexpected twist near the end that dipped the film a little bit. It worked but I couldn’t help but feel that it was a slight rip off of another animated hit, hint hint, cough, The Spongebob Squarepants Movie. As usual, some of the better bits are in the trailer. But it zips along at a great pace, keeping it light and fun. I was impressed with the clever satire they put in as well. The fact that Emmet is completely unaware he is under the rule of a dictatorship with propaganda everywhere. Most annoyingly so, in the incredibly catchy song Everything is Awesome by Tegan and Sara featuring the Lonely Island. 3D is not neccesarily an investment for this. A couple of bits stand out with the lasers and machinery but not a must. The animation would look just as good as in 2D.

Do you like Lego? Do you like the games? Then this is for you. Is it fun? Absolutely. One the family will enjoy? I don’t see why not. Hardly a classic but a fresh take that stands out from the churned out family movies these last few years. Get on it. 4 pieces (just) out of 5!