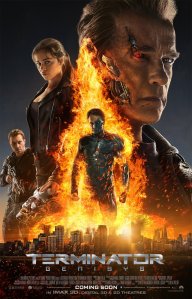 He’s back but should he have bothered? Let judgement day commence (See what I did there) as I tear into the latest offering of the Terminator franchise.

In a nutshell, I enjoyed this a whole lot more than I expected.

So what happens this time? John Connor (Jason Clarke) sends Kyle Reese (Jai Courtney) back in time to protect Sarah Connor (Emilia Clarke), but when he arrives in 1984, nothing is as he expected it to be.

I think it really comes down to how much of a Terminator fan. You are. One thing we can settle on. If you didn’t like the first Terminator, then firstly why are you here? And secondly, don’t bother seeing this one.

The original was (NO! IS!) a sci-fi classic. A iconic and incredibly quotable piece of filmmaking. I didn’t think Cameron could top it. Boy oh how I was wrong. Terminator 2: Judgement Day proved that sequels could surpass their predecessor. Taking it to another level.

BUT then we had to have more. Terminator 3: Rise of the Machines may have been a cliched-ridden retread of Judgement Day with a wailing Carrie from Homeland. BUT somehow I still enjoyed it (What?). Oh well . . . 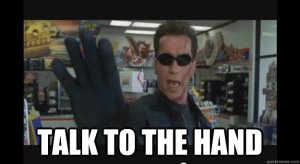 Terminator: Salvation was far far too serious. And Sam Worthington’s story line was a little weak. Different but weak. Plus one brief CGI Arnie cameo? Come on. AND Christian Bale as John Connor?! You couldn’t get any better casting! BUT of course, we all knew he took that far too seriously

And now we have another sequel. Another number in a franchise that no one really expected or wanted. Especially after ROTM . . . For some. A snippet of an ageing Arnie fighting his CGI 1984 self and I was sold for this latest offering.

If anything, it got straight to business. Explosions, carnage and mayhem. The inevitable voiceover explaining the consequences of Judgement Day. Even if I noticed the date had changed again. A niggle but one that I kept quiet about.

The only problem was that there would be more of those niggles to come. Courtney seemed a little wooden as Reese to begin with. BUT then he was playing the soldier tasked with saving the resistance and possibly the entire world . . . Apparently.

We have had a number of John Connors in the past (The irony in that statement) but Jason Clarke does enough to hold his own and plays the future saviour well.

The 3D was actually pretty good. Cyborgs and missiles flying out or zipping across the screen in every other scene kept my eyes twitching. Brilliant. Worth the investment. I loved the pace. The film didn’t really drag and within 15 minutes, Reese was already embarking on his biggest mission yet.

BUT this time everything has changed. I will do my utmost NOT to spoil anything BUT I give my warning now.

Something happens that changes everything. Reese goes back to an alternate 1984. What I loved was the shot for shot re-enactment of the original Terminator opening. The alleyway, the clothes store. It ticked all the boxes for continuity for me. The Terminator fan in me buzzing. And once a hooded ageing Arnie revealed himself to his ’84 counterpart, “I’ve been waiting for you”. I had a big grin like a Cheshire cat.

BUT with all the timey wimey guff. I could feel myself asking questions. Does that mean that the events in the other Terminator movies never happened now? That universe now gone. It certainly meant so for the ROTM and Salvation films. Some will rejoice. Others maybe surprised. Game changer?

Things got even more baffling as one of the officers turned out to be a T-1000 in disguise. NO Robert Patrick, guys. Sorry. I was gutted. Not even a CGI version. Byung-hun Lee didn’t do a half bad job. BUT he was always going to fall short of Doggett. Sorry, Kristanna Loken.

On the issue of perfect casting, I couldn’t think of anyone better to play the feisty female fighter that would give birth to the leader of the Resistance than Emilia “Khaleesi” Clarke. Aspects of Sarah Connor’s character may have changed but if anything it was for the good. I loved Linda Hamilton but her 1984 Sarah Connor unfortunately was a blithering mess (And rightly so. She was a waitress in her twenties being chased by a future assassin).

I loved that she was resilient, resourceful and knew what to do. Even if her “Pop” was an emotionally detailed future cyborg. If anyone was a blithering mess, it was Reese. Clarke and Courtney had great chemistry. Which, of course, would be crucial. They worked well and made their inevitable pairing a lot more bearable and watchable.

BUT of course, there is one man. That Austrian bodybuilder who would become one of the most iconic figures in film history. The spewer of a thousand quotes. Oh yes, he’s back! And very much on form. Arnie proves that age hasn’t hindered his commitment or humour.

Surprisingly, he is not in it as much as you think but every time he is, he steals the scene. Some cheeky scientific mumbo jumbo about ageing skin tissue to explain an ageing Arnie and we are good to go. “OLD but not obsolete” mutters the Austrian cyborg. A demented smile spreading across his face. Legend.

Writers Laeta Kalogridis and Patrick Lussier don’t do a bad job of tackling the alternate realities. The theorizing did get a little heavy in the middle act after all the mayhem. All they had missing was a mad Doc with a chalkboard in the background. BUT luckily Arnie’s charm politely pokes fun at the ridiculousness of it all and lightens the mood.

It does work. Theoretically speaking. I was just a little annoyed that the trailers revealed a little too much about John. It would have been such a bigger twist if it wasn’t being heavily flogged everywhere. He’s not the John we know, anymore. An interesting development. Some may argue that it is another retread of T2. BUT Skynet messing with the saviour? Come on.

J.K. Simmons was great as O’Brien. A copper who keeps crossing paths with the time travellers over the years. It’s just a shame his character was a little unnecessary. An Oscar winner and still only given tidbits? Really? He still nails it though.

The special effects were fantastic! I was worried from all the early trailers that the new CGI was getting worse and more cartoony. Luckily they must have gone back over the film because the detail was impressive. Still got nothing on Stan Winston’s works BUT not bad. At least Arnie didn’t look like he had silver velcro on his face like the early images offered. 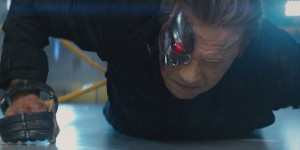 As I mentioned, Skynet inevitably make an appearance but with a new face. Trust me. The actor they chose for the role will spur a number of ironic time jokes but I’m not going to spoil it. BUT WHO? WHO? WHO could it be?

By the closing moments, I felt baffled and numb. The plot holes and questions increasing as the fiery finale came to a close. Things are definitely left open because the future must still happen for future Arnie to come and save a seven year old Sarah? Because that reality is still happening? Right? Yep. Marks did drop for that.

BUT to get a seal of approval from James Cameron as the film that should have followed on from Judgement Day must mean something. I didn’t see him do that for the others. If there are going to be more instalments of this calibre then I am prepared to keep watching.

I actually feel excited about the next one. And hell, the pay off might not be that bad. It will never top T1 and T2. That was always going to be a huge ask BUT it did tick the majority of the boxes and surprised me. Something I didn’t expect.

GET TO THE MOVIES NOW!