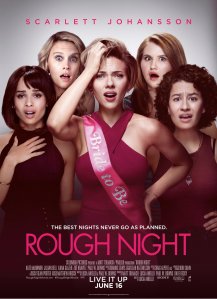 Yikes! I’d rather have a rough night than watch this again.

Things go terribly wrong for a group of girlfriends who hire a male stripper for a bachelorette party in Miami.

A highly unfunny opening college flashback didn’t build my hopes up. It was good to see that ScarJo was up for a laugh BUT this was a major step down for the Avengers star.

A shame considering the talent on display; Jillian Bell (22 Jump St), Broad City’s Ilana Glazer and Saturday Night Live‘s Kate McKinnon. Funny people in their own right. BUT as much as they gave it their all; the material was dreadfully weak.

The reserved workaholic needing a break from her busy schedule while the rest of the gang were desperate for any excuse to escape their problems.

Popping a champagne bottle delivered a poorly timed airport gag BUT it managed to get a guilty chuckle out of me. That gag pretty much summed up the film.

“The house is everything I hate. I’m gonna take a protest dump”.

There was the occasional funny one liner and the dynamic among the girls was entertaining enough BUT the endless swearing, drug taking, shouting and penis gags got old and got old quick!

Upsetting Jillian Bell’s Alice with her very presence. Her eccentric spirit guru (and crazy Nicole Kidman-esque accent) were a much needed presence. Complete with Veggie Mite in tow.

30 minutes in, I was surprised at the dark turn that the film took after Alice’s unfortunate incident with a “stripper”. An act of desperation?

It delivered the odd titter BUT the stop/start pace and mismatched tone hampered the piece.

Even the naff subplot with Jess’ effeminate fiance (Paul W. Downs) was a huge misstep. The wine tasting was silly enough BUT the “sad astronaut” gag triggered one drawn out and highly unsavoury sequence involving adult diapers, meth and strange encounters at a petrol station.

It had potential with the Mad Dogs meets The Hangover vibe as the girls’ crazy weekend spiralled out of control with mistaken identity, dodgy coppers and drugged up strippers BUT it just didn’t work.

It tried to be serious with the friends coming to terms that their lives were taking different paths as everything came to blows. It didn’t work.

You had Kate McKinnon somersaulting off a moving jet ski as it ploughed into the beach . . . Meh.

A lechy Phil Dunphy (Ty Burrell) from Modern Family and naked Demi Moore did nothing to save matters. The sex-crazed swingers next door just killed the already lumbering pace of this hit and miss yarn.

It even resorted to desperate measures with ScarJo busting out some of her Black Widow moves to knock out some burglars.

If any of what I listed above sounded alright then this might be for you.

I watched it to the end BUT that was mainly to see how much worse it was got.

I expected more or at least something passable BUT despite the odd chuckle here and there, I think this is going to be a black mark on the Black Widow’s stellar CV.

Take it away Kevin Sorbo Hercules . . . 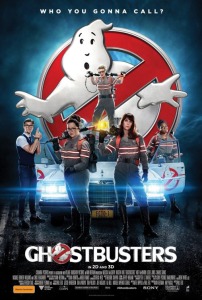 Who you gonna call? Someone else.

Well that was what I thought I was going to say.

When I heard that Paul Feig was taken on the iconic spookfest, I had mixed feelings. Female ghostbusters left me unconvinced. NOT because of the women in question or the fact that the movie was being rebooted with women. I just wasn’t sure that Feig’s style would suit.

The original Ghostbusters delivered surreal humour that was almost deadpan. Despite watching our heroes fight a 50 foot marshmallow man. Wiig and McCarthy have always been in your face and OTT. Funny BUT different. Not always a bad thing BUT was it Ghostbusters?

I loved The Heat and Spy. Hell, I even enjoyed Bridesmaids after being badgered to watch it numerous times. All high grossing comedies of the last decade. BUT with a 12A rating and a stab at taking on a classic; without the shouty OTT and crude humour, could the film deliver?

In a nutshell, meh. The creepy opening was certainly promising. It may not give the little ‘uns nightmares like the New York librarian. Shussshh – BUT it was still pretty freaky. The visual effects were quite good and I could finally say for once that the 3D was worth checking out.

It was silly fun having the plasma rays shoot out of the screen and the ghosts screaming and flying at you. BUT great effects does not a good movie make.

Kristen Wiig was an engaging lead and played the uptight physics professor Erin well. BUT we had to listen to some humdrum spiel about her tenure and an old spat with McCarthy’s Abby before the gang united.

McCarthy channelled her inner Ackroyd and played a much more subdued role. A change BUT one that didn’t quite deliver on the laughs as much as I hoped. The rapport between her and Wiig was hit and miss. Funny in one exchange, drawn out the next.

I couldn’t believe the Twitter bashing Leslie Jones got. She was hilarious and probably the most memorable out of the gang for me; “That’s a room full of nightmares . . . Yep, I ain’t going in there”. McKinnon didn’t a bad job as the eccentric Jillian BUT she got on my nerves by the frantic finale.

Chris Hemsworth (Thor) stole the show as the dim-witted no glass glasses wearing receptionist. He came out with some random one liners and played an absolute pillock. It was even funny watching him evade Wiig’s advances.

BUT for every good scene or joke, there were a dozen duds. *POTENTIAL SPOILER* It was great having the old faces thrown into the mix. It was just a shame that Bill Murray and Dan Ackroyd had terrible and highly unfunny cameos.

BUT it was nice to see Hudson, Potts, Weaver and Slimer. Even if the green blob annoyed the hell out of me in the several minutes he featured. There was a nice nod to the late Harold Ramis.

The supporting cast were wasted. Andy Garcia (Oh how the mighty have fallen) was terrible as the Mayor. He may have had fun playing the role BUT I didn’t watching him.

Michael Kenneth (Omar from The Wire) Williams and Charles (Game of Thrones) Dance had such generic roles. Anyone could have played them. Cecily Strong was probably the only other supporting character that didn’t get on my nerves as the bitchy two faced Mayor’s aid.

Neil Casey (Saturday Night Live) was a terrible villain. The bullied polter-nerd was too weak and the silly plot about vortexes and bringing apocalypse to NYC just felt like a retread of the original with even sillier and weaker results. It irritated me even more knowing that Twyin Lannister was playing a school dean.

The plot was dull and the predictability of it all killed a good bit of the energy and when the flat lines didn’t deliver, the film went through the motions. Let’s be honest Ghostbusters 2 was no prized trophy. I mean, come on. We had a toaster dancing to Jackie Wilson and the Statue of Liberty . . . Yikes!

BUT it was always going to be a tough act to follow the original. The main cast were good and had a great dynamic. I just wish they had a better script. The pace may have dragged BUT for all my nitpicking, I had a lot more fun than I expected. I wasn’t bored and there were laughs to be had.

The frantic finale may have delivered a special effects shoot em up with the gang busting out some cool gadgets BUT it felt rushed and abrupt after all the build up. Shame.

All in all, a mixed bag. Take it for what it is. Great effects, silly gags, a talented gang did enough to keep things watchable. BUT if there is going to be another, I just hope they can get a better script and we’ll be in for a real treat.