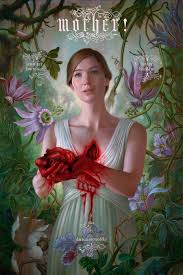 Oh MOTHER! That was bad.

A couple’s relationship is tested when uninvited guests arrive at their home, disrupting their tranquil existence.

I guess I wasn’t as big an Aronofsky fan as I thought. The very epitome of a Marmite movie.

For some, an existential dissection of life through religious allegory. For me, a meandering mess split into two agonizing halves that failed to deliver.

To be honest, it didn’t help that the marketing and posters suggested something more horrific. Now don’t get me wrong, Mother! is a modern horror . . . Of sorts.

BUT I was expecting a demented take on Rosemary’s Baby (Like it wasn’t demented already). And there was an echo of that in the closing act BUT this just didn’t go in the direction I hoped at all.

Seriously, pay attention to the first five minutes. The path is established pretty early on.

And if I didn’t have this ridiculous rule of seeing a movie out to the end; I would have joined the several people that walked out 30 minutes in.

This isn’t the worst film I’ve seen (BUT could be for this year).

Credit where it is due. The cast all played their parts well.

The first half of the film was slow burning BUT intriguing as Him’s (Bardem) writer’s block took its toll on the couple’s relationship. Jennifer Lawrence carried this film as much as she could as Mother. Doing her best to be a supportive wife.

Giving Him space and revamping an old country house in a wonderfully tranquil (yet strangely eery) pastoral setting.

I felt for Mother’s frustration and confusion; especially when the mysterious Man (Ed Harris) made his introduction.

A diversion for Him. A disturbance for Mother. The question’s mounting as Him welcomed Man into their home with no hesitation. Drinking and chatting rubbish. The paranoia setting in. Why is he really here? Why now?

Inventive names, aren’t they? Lazy or clever? I’ll leave that to you (LAZY!). I had to suspend my disbelief and remember this was a movie. There is no way that I would let my partner invite a strange couple we’ve only just met into my home. No-se-re.

I loved Psycho-Pfeiffer. It was great to see her back. Showing Lawrence how it’s done. She played the crazy doctor wife brilliantly. Mind games well and truly in flow. Like a cat playing with a mouse (And yes, I totally meant the Catwoman reference).

The pace was agonizing BUT I was still wanting to see where this was going. BUT the second half of the film completely ruined all that build up. So much so that by the end, it made that story line (almost) completely irrelevant.

Aronofsky really did pull the wool over my eyes. He completely turned the film on its head. I expected this domestic psycho-thriller to unfold into something else. BUT not this!

With more and more people turning up to see Him, I thought something creepier was going to happen.

Especially with the haunting sequences in which the house appeared to be “speaking” to Mother. A bleeding heart in a toilet was an unexpected image I won’t forget any time soon.

I mean it was unsettling BUT it was such a bloody visceral mess and not in the good kind.

I could see what the director was trying to do. Delivering social commentary and satire. BUT there was only so much religious imagery and mayhem that I could take!

The finale unravelled his true intent and I was surprised. I just didn’t like the end result. It wasn’t worth the two hour slogfest.

I didn’t enjoy it (Not that it was ever going to be a movie for “enjoyment”).

Okay granted, it has a been over a month since I saw Mother! and the experience is still fresh in my memory.

BUT I think that was only because of the sheer disappointment. It was torturous. I felt like I was going through this chaotic hell ride with Mother. A ride that I wish I hadn’t taken. Even with the surprising cameos popping up in the mental and sporadic closing minutes.

As much as I have had time to discuss plot points and themes, I still didn’t think Mother! was that special.

Bravo, Mr Aronofsky for pulling the wool over my eyes. You won’t be doing it again. 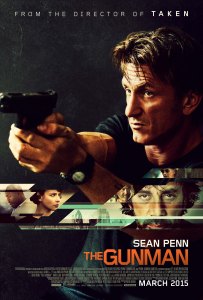 Sean Penn doesn’t do many films but when he does . . .

So what’s it about? A sniper (Sean Penn) on a mercenary assassination team, kills the minister of mines of the Congo. Terrier’s successful kill shot forces him into hiding. Returning to the Congo years later, he becomes the target of a hit squad himself.

That was according to the IMDb. I had no idea what was going on. BUT by the end, I didn’t care.

From the director that brought you Taken . . .

I expected no-nonsense, fist crunching, cars chasing, buildings exploding. ACTION! Not mindless exposition and cliched dialgoue with hammy characters that you couldn’t give two umphs about.

Sean Penn did his best. But his character was so weak and bland. He was the typical generic action hero.

Tortured good guy trying to do the right thing. Smitten with a woman he can’t have. Blah, blah, blah.

I don’t mind being force fed the same old predictable action movie bilge. Nothing’s original. BUT at least try and make it interesting or throw in lots of shiny explosions and high octane punch em ups to make up for it. Is that too much to ask?

Penn looked fit (Not in that way. Steady now). At 54, he proved he could still kick an ass or two. He dealt with the (little) action sequences we had on offer with ease.

I just wish his character didn’t feel like someone pulled out of The Expendables.

The plot was terrible. To make matters worse, it didn’t make any sense. The more they bleated on (and believe me, they did!), the more questions I had.

The opening didn’t really get things going at all. The whole Sky News reporting on The Congo showed potential. Keeping up with the times and building a story around it.

BUT oh how wrong I turned out to be.

The graphic footage and statistics were certainly an eye opener but they were soon pushed into the background for the usual Hollywood guff.

We are had to endure the drudge that was a hammy love triangle between Penn, Jasmine Trinca and Javier Bardem.

Bardem was probably one of the only saving graces. It’s just a shame that he got on my nerves as he went on. His *SPOILER* early departure from the film left a void that was never filled. The void being the rest of the film.

He played the part well as the sleazy operation leader hell bent on stealing Penn’s bird.

That was about as much as I got out of his murderous intent.

Seriously, the plot was that convoluted that it gave me a headache.

BUT don’t worry, it all ends the same way. That’s right. Corny as hell with no real thought or proper explanation. Lovely!

The problem with Bardem’s performance was that it was too manic. He went from a sleazebag to a drunken child within a few scenes. Bad writing. Bad interpretation. Shame.

Speaking of poor performances, Mark Rylance (Wolf Hall). Lordy lord. I couldn’t take him seriously. He sounded constipated. I kid you not. He looked the part. A slick, slimy corporate business type. Until he opened his mouth.

He wasn’t strong enough to be a lead villain. Even Penn didn’t look that convinced by him.

And Idris Elba. What was the point of him? What was his character’s relevance? He smarms his way in for about five minutes spouting some waffle to Penn about not building a treehouse in this garden today.

He chucks him a calling card (accompanied with a cheeky wink) and buggers off!

What a waste of a talented actor. The money must have been good. I mean, was his role cut in the film? To be honest, they missed a trick by not having his presence.

His character was a much needed injection. A bit of mystery. A quirky (if stupid) anecdote. BUT at least it was something.

The Gunman was dull, uninteresting and way too long. And considering it was called the Gunman. Penn didn’t use a lot of guns.

The action sequences were good when they appeared. Frantic, explosive but memorable? Hardly. They became a messy blur by the closing credits.

My main issue was that it seemed to take itself too seriously. The political commentary, the examination on the Congo, the endless “Will they, won’t they?” between Trinca and Penn (when we all knew they bloody would).

AND THEN as the final 30 minutes approached, they realised they had backed themselves into a corner and then desperately went out on an all-out offensive that just came off hammy, laughable and boring.

I mean, the showdown at the bull ring should have been brooding, tense and metaphorical. NOT hysterical.

I felt numb by the end. Deflated and my boredom still very much intact. To make matters worse, I looked to my movie massive (My two mates) and asked; “So why did they want him dead?”

The writer didn’t even make use of Penn’s forced plot device. A revelation that had potential to make this dud so much more.

Hardly spoilierific as it wasn’t explained or executed properly.

Penn’s character is diagnosed with an Alzheimers like disease. He has to record and write everything down. For a moment, I thought Memento meets American Sniper. Okay, let’s do this.

Oh no. Pardon the irony here but it seemed after introducing this newly discovered character flaw, they seemed to forget about it until the final 20 minutes when every time Penn has the chance to dispense some vengeance, what does he do?

He drops to the floor and wails about like’s he having the worst hangover ever!

The whole scorned man with nothing to lose as he’s about to lose the most precious thing of all has been done to death but it still could have offered something.

Not even Ray Winstone could save the day. You know you’re onto a loser when you’re praying for Ray’s messy mercenary to pop back into things.

Sean Penn should have corned him and said, “What are the odds of this film being recommended?”

Place your bets because I’m not.

And to make me laugh even further, I looked into the screenwriters. One of them. Sean Penn. Case closed.