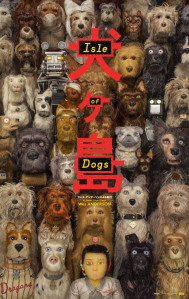 Did you hear the rumours? What rumours? That Isle of Dogs is pretty good.

Set in Japan, Isle of Dogs follows a boy’s odyssey in search of his lost dog.

Confession time, I’m not the biggest Wes Anderson fan. BUT I loved his take on Roald Dahl’s Fantastic Mr Fox. His quirky whimsical style suiting the children’s book to perfection. I was really excited to see what his next foray into stop-motion animation would offer.

All barks have been translated into English while humans speak in native tongues or by interpreter/foreign exchange student/electronic device.

I knew what I was getting myself into.

Alexandre Desplat’s grandiose score and Courtney B. Vance’s (American Crime Story) brooding narration helped liven up a crazy prologue titled ‘The Boy Samurai’. A strange fable about a century long vendetta between a renowned Japanese dynasty (The Kobyashi clan) and .  . . Some dogs. Okay then . . .

Flash forward to 20 years in the future and an outbreak of snout fever has spread among canines in the city of Megasaki with a risk of infecting humans. In a hasty measure by Mayor Kobayashi, all dogs are dumped on ‘Trash Island’. Left to their demise.

The animation was fantastic. The detail, the expressions, the set designs. Brilliant. Matching the zany nature of our eccentric director. Come on, even the title spells; I LOVE DOGS.

The dogs really did steal the show. Their Magnificent Seven Western showdown introduction had me in stitches. Piles of litter rolling across like tumbleweed as they fought rival packs for scraps. I loved the cartoony cloud scuffles.

The cast were superb; featuring a mixture of regular Anderson stalwarts and new faces (Well, voices in this case). Edward Norton was a particular highlight as Rex. BUT each dog had their moment to shine from Goldblum’s gossiping to Murray’s meanderings. However, none of them could top Chief.

Breaking Bad’s Bryan Cranston delivered that Heisenberg tenacity to the hostile hound. A dog that has never had a “master” and refuses to accept one.

That is until one of those said “masters” crash lands on Trash Island looking for his lost dog.

I loved the endearing relationship that developed between Chief and Atari (Koyu Rankin) as the stubborn stray (initially) refused to help. The lost in translation shtick complimented the film.

I didn’t have an issue with the lack of subtitles as Atari raged in his native tongue. The detail in the eyes said it all. The emotion captured perfectly in a wonderful flashback between him and his beloved dog Spots (Liev Schreiber – Ray Donovan).

And luckily when some of the conversations in Megasaki got a little dense, we had the fantastic Frances McDormand and Greta Gerwig for interpretation.

That was the only problem. When the humans were involved, the pace dragged and; if it wasn’t for Gerwig’s hilarious political activist/foreign exchange student Tracy, my interest would have completely waded.

The maniacal Mayor’s canine vendetta and conspiracy to thwart scientists for a cure was dull as dishwater. I just wanted to get back to Trash Island.

“You should see the other dog. I think he was made of stainless steel”.

The crazy canines and their quest to help Atari was full of heart and had all the Anderson quips and humour we’ve come to love.

Even the kanji was translated during a news report with such phrases as: (Sad funeral) and (Tragic disaster).

“Maybe it’s me, I’m not a doctor or maybe it’s the clutch pedal accelerator in the side of his head but . . . ”

Too adult for kids? I think this could leave the little ‘uns fidgeting in their seats.

Don’t get me wrong, the dogs were fantastic and their hilarious convos were comedy gold BUT the student protests in Megasaki and animal rights debates was a tall order even for yours truly.

The journey was entertaining and delivered a few surprises along the way, with a number of eclectic characters popping up from Harvey Keitel’s cannibal crew to Tilda Swinton’s prophetic pug.

BUT this wasn’t perfect by any means. It was tough NOT to make comparisons to Fantastic Mr Fox, which this fell short of.

Scarlett Johansson was wasted as show dog Nutmeg. She had good chemistry with Cranston’s Chief and it teased a little side story that didn’t surmount to anything.

The final showdown was a little flat as Anderson traded robot dogs and quirky humour for haikus and pretentious speeches in a giant conference hall.

I was a little disappointed at how Chief and his band of merry misfits were strangely absent in the chaotic finale. Shame.

It felt like something was missing. I couldn’t fault the charm and heart behind this zany flick and I still smile thinking of certain scenes BUT it wasn’t enough for the talent at hand and the characters that were at their disposal. I was left wanting.

BUT fans of WA and stop-motion animation will not be disappointed.