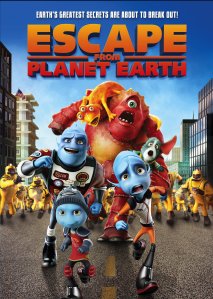 And the duds just keep on coming. I need to escape from the cinema for a while. Enough to keep the little ‘uns quiet for 80 odd minutes but parents might want to take in their Kindles (or a physical book if you’re old school).

Astronaut Scorch Supernova (Brendan Fraser) is a national hero to the blue alien population. A master of daring rescues, Scorch pulls off astonishing feats with the quiet aid of his nerdy, by-the-rules brother, Gary (Rob Corddry). However, when the brothers receive an SOS from a notoriously dangerous planet (Earth. What? Spoilers? Come on guys), Scorch rejects Gary’s warnings and bounds off for yet another exciting mission leading to his capture. Inevitably, it’s up to scrawny, risk-adverse Gary to do the real rescuing.

Brendan Fraser (The Mummy franchise/George of the Jungle) what happened? Oh how the mighty have fallen. In all fairness, his movie list of late is hardly legendary. He does his best to bring the laughs as chughead Scorch in his strangely Buzz Lightyear-esque attire.

It’s a shame with how much talent was attached to this. I know, it’s a kid’s film but Disney, Pixar and Dreamworks (most of the time) have delivered timeless classics with great stories, great characters and enough to entertain everybody. Unfortunately this one just doesn’t make the cut.

It’s not all bad. It has enough OTT slapstick gags to keep the little ‘uns giggling and the animation is brilliant. Visually colourful and detailed. 3D hardly a must but there were a couple of clever gimmicky moments in there. Corddry (Hot Tub Time Machine) plays the pathetic protagonist quite well.

Ricky Gervais once again pops up in a rather dull and fed up voice over as the computer system, BING, James Bing. Oh dear. Now I’m one for the puns and silly one liners but even that one got me cringing. Jessica Alba surprisingly goes against character type and plays the baddie for a change.

William Shatner provides his Trekky gravitas to the sinister General Shanker with aplomb. Sofia Vergara (Modern Family) plays a rather irritating and bland character that really doesn’t have a point or contribution to the film (Bit like Modern Family. Ouch. Stop it). Sarah Jessica Parker does her best with the lines, “Not bad for a mom who’s had two kids”.

As does Jane Lynch (Glee) as the one eyed creature and appropriately named Io, “First time I laid eye on you”. Does that line sound familiar? Hmmm I thought so too (*Cough* Monsters Inc *Cough*)

The characters that stood out for me were George Lopez (Rio/Rio 2) as the slimy slug hybrid Thurman. The ever talented Craig Robinson (This is the End) manages to make a memorable performance as the eccentric fast talking Doc. Steve Zahn (Diary of a Wimpy Kid) hippies it up as alien enthusiast Hawk. His first encounter with Corddry’s character was quite funny but it soon goes on too long and gets very annoying.

This isn’t the worst animation film I’ve seen this year. That honour goes to the turkey Free Birds (What?) but it’s pretty close. Interestingly enough for those who have seen Free Birds; was Escape from Planet Earth an unintentional spin off? The facility and more importantly, the quarantined Monsters Inc rip off suit guys look just like them.

Regardless, they steal the show in one tut worthy guilty pleasure of a scene in which they manage to parody a number of movies in a food fight. The Artist was a nice touch.

There is a cheeky pop at satire with the government propaganda video segment, “Do you believe in Communism? Then you are an alien”. Unexpected but not bad. The Beatle-esque aliens got a guilty laugh. The twist *POSSIBLE SPOILER BUT NOT REALLY* that humans have been capturing aliens and stealing their technology and claiming it for their own was a nice touch. Doc venting his frustration at the money he should be earning for Facebook was quite funny.

However, it gets all too corny and cheesy. For every good joke, there’s a dozen naff ones. I mean an encounter with a wacky waving inflatable tubed man brought the odd chuckle. But just doesn’t work as a recurring joke. Mainly because it wasn’t that funny the first time round.

If you’re looking for a quick distraction for the kids, then give it a go. Otherwise invest in How To Train Your Dragon 2 or something.