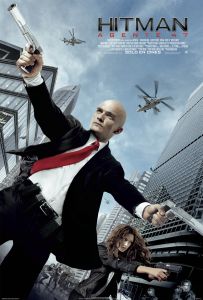 The iconic video game assassin gets a second chance on the silver screen. BUT should they have even bothered?

An assassin (Rupert Friend) teams up with a woman (Hannah Ware) to help her find her father (Ciaran Hinds) and uncover the mysteries of her ancestry.

Unfortunately, it really does sound as dull as you think. There are only so many explosions and relentless CGI injected action sequences you can throw in to hide what was a tepid shoot em up.

After his stellar turn as Quinn in Homeland, Friend takes on the big screen and the iconic video game assassin. It’s fine to have the look but his stone cold pallor and dead pan delivery really did justice to the character. Shame, he didn’t have better lines.

The first twenty minutes zipped along with an ultra-brief but highly watchable overview of the hitman’s origins. Something that bugged me from the original feature. I don’t know why it would be such a problem to see the agent start out from the beginning.

Instead we had a disjointed and uninteresting back story involving one of his targets. Hannah Ware played the feisty Katiya well and was certainly a lot less irritating than Kurylenko in the original. BUT the more we delved into her past, the more plot holes there were. However by the end, I hardly had any interest left to care.

What didn’t help was that after a quick chat with some random and highly unmemorable character, Katiya would suddenly remember some completely unrelated event in the past that didn’t even involve her. It was either that or she would spout statistics like a pleb. It just didn’t work. It was a shame as Ware and Friend weren’t a bad pairing.

The fist fight and shoot em sequences were entertaining enough and subdued my griping when they arrived. BUT the car chases and finale were overlong and hampered by incredibly poor CGI. A sequence in which 47 tests Katiya’s abilities by strapping her to a jet engine (Yup. That sort of movie) was terrible. And the helicopter skyscraper showdown was just awful to look at.

It was just about watchable like its predecessor BUT seemed to suffer from virtually the same flaws. The dreadfully OTT score. The incredibly dark tone that took itself far too seriously for its own good.

It seemed to realise that after the hour marker and desperately tried to inject some much needed humour. There were a few one liners that lightened up all the brooding and endless staring intp space. In one scene, our bald bad ass is perusing a safe house location. Checking the closets.

Without a bat of an eye, our hero simply replies, “No. Moths. They’re attracted to the Italian wool”.

Unexpected BUT it got a guilty smile out of me. Pity, it was a case of too little, too late.

Ciaran Hinds was completely wasted in his role as Katiya’s father. He did his best with the hammy dialogue. BUT his character was so weak and cliched that he was fighting a losing battle from the get go.

Zachary Quinto played an incredibly bland villain. His double crossing was so predictable. You could time when he was going to strike. He only really got to unleash his inner Sylar in the closing minutes. Again, too little, too late.

The writers tried to pull off a Terminator vibe with 47’s machine like persona. He feels no pain, love and he will absolutely will not stop. Tragically, it didn’t quite come off but the nod to Leon was a nice little touch. Keeping his guns by his side as he slept.

I was impressed to see a few traits of the video games seep into this. The camera invasion stealth sequence reminded me so much of Hitman 2 (The only game of that franchise that I actually played and failed miserably at).

It was tough not to draw comparisons to the first feature. And that wasn’t perfect by any means. The only saving grace was Timothy Olyphant. Friend may have provided a different take but it felt like both actors’ interpretations were put in the wrong movies.

The far fetched stupidity of the plot made some of the sillier aspects of the video game franchise seem more believable. It is so wrong to actually steal the plots of the games and adapt them? Oh wait, no. That would make sense.

Third time’s the charm? Somehow I don’t think there will be. Another video game adaptation misfire to add to the pile.

Two stars. One for the two leads and one for the action sequences that did spike my interest.