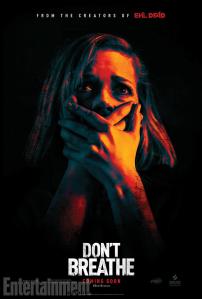 Messing with Stephen Lang. That dude is a machine.

Hoping to walk away with a massive fortune, a trio of thieves break into the house of a blind man who isn’t as helpless as he seems.

From the creators of the Evil Dead remake. My heart sank. A shambolic monstrosity that should never have happened. Thankfully, I didn’t share the same sentiment with this taut thriller.

The establishing shot hooked me in from the get go. Tension set. However, I did have a little grumble as the story flashed back BUT thankfully writer/director Fede Alvarez didn’t mess about. The film set up the characters and the premise pretty sharpish.

It takes a lot for a premise like this to work when you only have three characters BUT thankfully the cast were perfectly chosen.

We join our trio in the middle of a burglary. I felt my loyalties were tested very early on. Their unlikeable and amateurish antics had me silently rooting for the appropriated titled Blind Man as they robbed and destroyed people’s homes.

As much as you could feel for Rocky’s background (Jane Levy – Evil Dead/Suburgatory) and need to break from the desolate Detroit backdrop; you despised the way she strung along her best friend Alex (Dylan Minette – Goosebumps) and manipulated him to do her bidding.

It made a change to see Minette break away from family movies. He played the conflicted (and tragically “friend-zoned”) Alex well. Torn between pleasing the woman he loves and giving his father a prison sentence after stealing all his client’s files to help in their burglaries.

For a good 20 minutes, it was a slow burning crime thriller. That was until they received the tip of a lifetime (or so they thought). A blind war veteran sitting on a fortune. Daniel Zovatto was highly annoying as Money. The corn rolled douche. I’m sure that was the point BUT I was actually hoping the big man would wake up as they broke into his home.

The stake out and dull cliched rationalizing did have me fidgeting a little bit. BUT that all changed when Lang (Avatar) was introduced. He was superb. His physical presence, along with those unsettling scarred eyes, freaked me out. From the moment he stumbled onto the scene, I was hooked.

For a brief moment, I felt more empathy towards the baffled vet. The silence created a perfect atmosphere as the thieves crept around the house avoiding his clutches. I couldn’t help BUT think of that infamous Simpsons episode with Bart and the blind man. Especially when one of them was hiding in the closet.

I tried not to pick at the amateurish mistakes that the gang made. Walking past the only door with a padlock on it and wondering where the fortune was? Hmmm . . .

BUT it did unfold into one of the deadliest games of hide and seek. You could cut the suspense with a knife. The night vision sequence was brilliant as the Blind Man cuts the power to his advantage. Waiting in the darkness for the slightest sound or movement. You could hear a pin drop.

From how the film was advertised, I expected a horror for some reason. And if you were too, I warn you. It isn’t. If anything, I’m glad that it wasn’t. A proper little thriller. Just when I was getting bored of the endless hiding and breath holding, the closing act took an even darker turn and I was transfixed right up until the tense finale.

A great cast, a creepy premise and some perfectly executed suspense ridden sequences makes this one to watch.