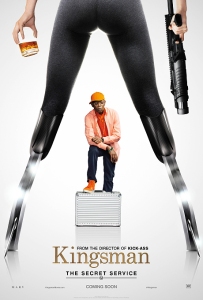 From the people who brought you Kickass. You should know what to expect. A riotous action flick of ridiculous proportions. More please.

Kingsman hooked me from the get go with an explosive opener as we watch a Middle Eastern compound detonate to the beat of Dire Straits’ Money for Nothing.

Taron Egerton will certainly be one to watch for the future. He delivered an impressive movie debut as the anti-social Eggsy. This is certainly one of the better films I’ve seen this year. Fun, frantic and relentless.

I always felt Colin Firth could have been a Bond. Now he’s get his chance. Sort of. He was superb. Didn’t do too bad in the fighting sequences either. Who said old dogs couldn’t learn new tricks? He was every bit as charming, charismatic and funny as the 007 counterpart. He worked well with Egerton and made the perfect mentor.

We follow the conniving chav as he endures the intensive but enthralling Kingsman program. The ‘test’ sequences were tense, action packed and flippin’ fun as Eggsy must fight tooth and nail against the more ‘acceptable’ candidates. The class wars in full flow and brilliantly personified in the ultra snobby spies.

For the first hour, it ticked all the boxes from the cracking soundtrack, the manic car chases to the adorable little pug JB.

You couldn’t pick a better villain. Sssssamuel L (The L stands for Motherf**ker) Jackson was brilliant as the maniacal music mogul hell bent on dealing with the Earth’s overpopulation. Even if he is afraid of the sight of blood.

He was the ultimate scene stealer (Isn’t he always?). You couldn’t help but smile at the speech impediment ridden sociopath. His tet-a-tet with Firth was worth watching alone.

A brilliant mockery of every confrontation that Bond ever had with a villain as the pair wined and dined on a McDonalds Happy Meal. You read that right. “Is this the part where I tell you my plan and you escape in a cool way with some gadget?”

I was impressed with the supporting cast. The alluring Sofia Boutella (Street Dance 2) was a perfect henchwoman as the amputee assassin Gazelle. Disposing of any threat with some killer moves.

It took me a while to realize that one of the red herrings was played by Luke Skywalker himself. Mark Hamill was almost unrecognizable with his trampy beard and posh Swede accent. Great to see him in something other than Star Wars.

Michael Caine nailed it yet again. BUT I was surprised at how little there was of him. However, I was happy to see more of the talented Mark Strong. Finally earning a bigger part as Eggsy’s trainer Merlin.

The plot was mental. If anything, it reminded me of a even more messed up take on the hit Channel Four TV series Utopia. The satire behind the influence of media and technology was spot on. The running gag of missing celebrities that refused to comply to Jackson’s demands was hilarious.

HOWEVER, as much as the cast and one liners were on fine form; Kingsman wasn’t perfect. The pace did dip in parts. Especially during the middle act. Some of the ‘revelations’ were far too predictable. That’s not to say that the writers weren’t afraid to take risks.

BUT even when the pace dragged, we were soon rewarded with another chaotic punch em up. The church sequence should offer enough carnage to cure anyone’s blood lust. Trust me.

BUT as the film drew to its ridiculous close, it soon became too much for me. It was too fast, too frantic and that delicate balance of silliness was soon tipped right over.

Despite its flaws, I came out smiling. It was manic, funny and highly watchable. If you loved Kickass, I’m sure you’ll love this.

BUT if you love Bond, I think it will be down to what sort of mood you’re in to see it ripped to pieces.