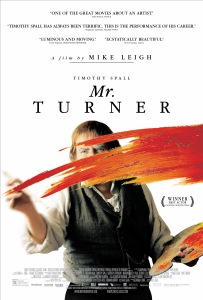 Well, this didn’t turn me into a fan but a stand out performance from Spall certainly kept me going.

Mike Leigh takes his paintbrush to the canvas to paint the last 25 years of the great, if eccentric J.M.W (Joseph Mallard William) Turner.

I loved Leigh’s earlier efforts; Life is Sweet, Vera Drake and Another Year. However, I still found them a little overhyped. Good examinations of family, class and society but a little long at the tooth.

From the elongated if haunting opening sequence, I knew what I was in for. One of Turner’s most famous works slowly materialising and consuming the screen.

This is followed by a slow burning but beautifully captured picturesque pastoral Dutch countryside sequence as we watch Turner paint a windmill.

A wonderfully shot but slow burning examination of one man’s genius. The cinematography by Dick Pope has been commended and rightly so. A feast for the eyes.

I was not familiar with the works of Mr Turner. Firstly, I’m not a big art lover. But watching the process that he took in mastering his craft was an interesting process.

But with such genius, comes many flaws. At first, I was frowning at Spall’s delivery. Reduced to grunting and grimacing for the first part of the film. I wasn’t sure whether I liked the man.

A social outcast if ever there was one. Loved by a housekeeper (Dorothy Atkinson) he takes for granted and occasionally exploits sexually. He isolates a family he fathered out of wedlock with a scene stealing turn, by regular Leigh stalwart, Ruth Sheen as Sarah Danby.

He virtually denies their existence and doesn’t even ask of their welfare. To be honest, there wasn’t enough of Sheen or enough conflict for me. Leigh paints a rounded portrayal of Turner, capturing him at his best (or most eccentric) and his worst; he actually had himself strapped to the mast of a ship so that he can paint a snowstorm.

His relationship with his father (Paul Jesson) was done well and it added a little humanity to this strangely alien painter; completely out of touch with etiquette. Painting a picture of an aristocrat and openly spitting on the canvas to provide a better finish.

Jesson and Spall were a great pairing. I rate Timothy Spall quite highly and despite the character, I couldn’t stop watching him. A sterling performance.

The props and detail were perfect. I’m not an art lover but some of the paintings were outstanding. The Victorian dialect was a little undecipherable at first but you soon get the gist. It helped that I had studied Victorian literature back in sixth form (Oohh err). Didn’t expect to have to remember that.

I didn’t realise that Turner was both celebrated and reviled by the public and royalty. The open mockery regarding his final works was incredibly harsh. People made plays questioning that he had lost his sight if he thought he could regard such a painting as art.

When Turner does get painting and shares his views of his work, you don’t see a cantankerous recluse with questionable morals, you see a genius with an eye for detail.

An interesting scene in which at the Royal Academy of Arts, Turner appears to ruin another member’s work by smearing a red spot in the middle of the ocean. However, once Turner finishes, you notice that he has painted a buoy.

One relationship I felt was also captured quite well was between Turner and the seaside landlady, Sophia Booth (Marion Bailey). Bailey and Spall had great chemistry and I felt for the pair. I didn’t approve of the fact that they had to live incognito in Chelsea.

Look at me. Didn’t approve. I’m more Victorian than I thought. A sign of the times.

The 150 minute pace was debatable. I felt that parts dragged and that the film meandered along the waves Turner painted.

At its best, a beautifully shot travel diary as a renowned painter travels, paints, stays with the country aristocracy and visits brothels.

At its worst, a meandering pretentious if rounded biopic on an eccentric Victorian womaniser. The cast do their best BUT with the people Leigh had at his fingertips, I just wish more was made out of them.

This really is an acquired taste. Very much like the works of Mr Turner. If you’re an avid fan of Mike Leigh, Timothy Spall and the artist Mr Turner, then this is for you.

But for newcomers of any of the above, this may not be the best starter.