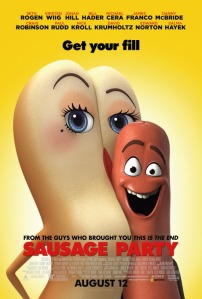 One of the most outrageous, ridiculous, stupid BUT funniest films I’ve seen this year.

A sausage (Seth Rogen) strives to discover the truth about his existence.

If you’re a fan of Rogen’s crass drug induced humour and want to see him take on Toy Story BUT with talking food, then this is right up your street. Anybody else, serious movies are on Aisle 3.

The opening lulled you into a false sense of security as all the various supermarket food products burst into song praising the Gods (Us) for choosing and taking them to the “Great Beyond”. BUT as the lullaby progressed, I had to do a double take to make sure I heard that right.

And before I knew it, the song turned into something from South Park with a Sauerkraut in the guise of Adolf Hitler plotting the extermination of the J(ew) uice. And we hadn’t even got to the noodles yet.

It really was ridiculous BUT fun. We had the blossoming romance between Frank’s (Rogen) sausage and Brenda’s (Kristen Wiig – Ghostbusters) sexy bun as they prepared to go to the Great Beyond and finally get together. Crude innuendos aside.

However, things don’t go to plan as the pair fall out of their trolley cart. Leading to one messed up little cartoon.

The trolley crash looked like something out of a battlefield. You had a banana’s face hanging off. Peanut Butter scooping up his wife Jelly’s squishy remains. So stupid BUT it got me! With a handful of food goods, Frank and co. travel across the supermarket to discover the horrible truth.

The pair fearing they had upset the Gods by breaking out of their packages and “touching tips” (Relax. Touching hands. Yeah, they have hands).

Along their way, they meet Lavarche (David Krumholtz – Numbers) and Sammy (voiced by none other than Edward ‘Fight Club’ Norton). A perfect encapsulation of the Israeli/Palestinian crisis. The commentary and jibes were pleasantly tongue in cheek “You come into our aisle and take our shelves” and “There are 72 extra virgin oils waiting for me on the other side”.

The supporting characters were fantastic. Bill Hader (Cloudy with a Chance of Meatballs) was hilarious as Chief Firewater. The ancient whiskey that knows all. Salma Hayek delivered her sultry tones to a lesbian taco and Craig Robinson as the ‘un-perishable’ Mr Grits (They call me Mr Grits!). My God!

It took me a while to recognise the voice of Barry the deformed sausage. Michael Cera – where has he been? The scared little sausage who faces the great Beyond. A mad little subplot that I’m surprised I didn’t pick at more. I mean, come on. There was a drug dealer, tweaking on bath salts, who was able to talk to them.

The endless movie references. The unbelievable gore. Even though it was food literally getting prepared. A potato being skinned alive. Carrots being diced and sliced. Brilliant.

Nick Kroll did a decent job of voicing a Douche. No, really. As well as dealing with accepting that all his friends were being cut up, fried and boiled for his Gods’ sustenance, Frank has to fend off a vengeance seeking douche bag who he knocked out of the cart. Killing juice boxes, tequila bottles and ‘roiding’ up to accomplish this vendetta.

The only problem was that his character became increasingly less funny as he kept popping up. His running gag with random fruit appearing at the end of his punch lines was fun BUT it got worse: “How do you like them apples?” Cue a bag of apples turning round smiling. “No, not you!”

If none of this is winning you over (and no, I’m not making any of it up!), then this is definitely not for you.

All the sly digs at Disney were there with all the food smoking herbs, getting smashed and screaming profanities for 90 minutes. There was even a car bumper sticker with ‘DIXAR’ spread across it.

The finale was utterly outrageous. Words cannot describe what I watched. It was f*ked up. It’s not as if Rogen and co haven’t gone for the shock factor before. I mean, This is the End cut it pretty close. BUT I was still surprised of what lied in store.

Mental, stupid, it’s the closest you’ll get to a stoned Rogen giving a Pixar style movie the VIP treatment. 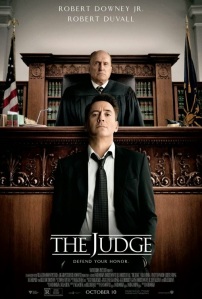 Time for a bit of R&R

Robert Downey Jr and Robert Duvall team up to tackle the courtroom in a predictable but highly watchable drama.

So what’s it about? Big city lawyer Hank Palmer (Robert Downey Jr) returns to his childhood home where his father (Robert Duvall), the town’s judge, is suspected of murder. Hank sets out to discover the truth and, along the way, reconnects with his estranged family.

I was surprised at the flogging this film got. I was pleasantly surprised. But then these days, I go into a cinema with such dread it’s hard not to be.

Now the first 30 minutes had me looking at the little hands on my watch. It was slow and predictable with RDJ “Starking” it up. Some people will disagree but I’m sorry. He was Tony Stark with a law degree. A fast talking ruthless lawyer with no respect for the courtroom or his peers. A perfect case example being when he openly urinates on one of his opposing counsels, ol’ Bernard from The Santa Clause, David Krumholtz.

“Did that just happen?”, laughs Downey Jr. Unfortunately, yes. And boy, has Krumholtz put on the pounds.

But once Hank returns home and reunites with his estranged father, the iconic actor that is Robert Duvall, tempers rise, old wounds are re-opened and the movie hits its stride. Duvall and Downey Jr are brilliant together and really bring their A-game to deliver a decent pairing.

It’s all a little predictable with the pair first sparring, barely speaking. That is until the murder charge. What helps is that despite it being arguably a TV movie story line, the two Roberts prove what good acting can deliver. Interest. That’s not to say that there wasn’t revelations along the way. Some worked well. Others did not. But I won’t divulge details.

There were certainly some heartfelt moments between father and son but there were also a number of missed opportunities that could have made this more than just watchable.

Vera Farmiga (Bates Motel) plays her part well as the old high flame who stayed home. She has good chemistry with RDJ which helps make their inevitable and corny relationship sequences watchable. The outcome, however, was so predictable and all a little too easy with no real friction.

The same could be said for Hank’s fractious relationship with his daughter (Emma Tremblay – The Giver). The pair worked well together and it would have been nice to see more of that but it’s all resolved so easily with a trip to Grampas.

Billy Bob Thornton was, to be expected, very good as the snake toothed Dwight Dickham (I don’t think there was supposed to be an intentional pun in the surname). However, Thornton’s role was limited to mere grimaces and the odd jibe which was a shame considering the actor and potential that the rivalry could have delivered.

Especially after his turn in Fargo, this role was ripe for making a worthy adversary to RDJ but the film very much focuses on the father/son dynamic. A shame because by the end you realised that anyone could have played the role.

Vincent D’Onofrio (Law and Order: Criminal Intent) was quite good as the older brother, Glen. However I wish more was made out of Hank and Glen’s rocky relationship. A revelation that is revealed later on could have been a perfect opportunity for a lot more confrontation but was (again!) resolved so easily with Glen taking the higher ground.

Jeremy Strong (Zero Dark Thirty) was brilliant as Dale. A brother with special needs and a passion for 8mm film-making. It worked well and added something to the brothers dynamic. It also allowed for some entertaining but also endearing moments. Entertaining in the fact that Dale has no filter and tells the truth when he really shouldn’t.

A subplot involving Leighton Meester (Gossip Girl) went no where. And to be honest was completely unnecessary. It had the potential to be made into something much more but was merely a running joke. A joke that wasn’t that funny and didn’t fit in with the tone of the film.

The courtroom scenes were well done but didn’t quite hit the heights that you wanted. When Duvall’s character is finally cross examined, there is a lot more tension and drama to be had. Dax Sheppard (Without A Paddle) did a convincing turn as the useless aid, throwing up before every court session to fight the nerves.

That was the issue for me. It tried to be light and comical in one instant, then dark and dramatic in another and it didn’t really excel as well as you would hope at either.

Don’t JUDGE (what?) it by it’s overlong running time, there is still plenty to be had in watching two fantastic actors do what they do best. I just wish they had a better story line and script to work with.

BUT still worth a look.

The jury has reached a verdict 3/5