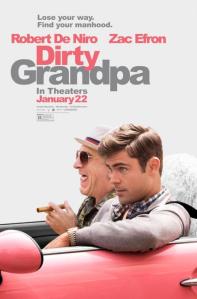 Right before his wedding, an uptight guy (Zac Efron) is tricked into driving his grandfather (Robert De Niro), a lecherous former Army Lieutenant-Colonel, to Florida for spring break.

Rude, crass, filthy and for a good portion of the film quite entertaining. Definitely marmite for the movie fans. You’re either going to love it or hate it. For some, an outrageous sex comedy. For others; a monstrosity and new low from one of Hollywood’s greatest . . . Oh and that bloke from Goodfellas is in it.

The opening didn’t mess about. It skimmed through the cliched set up quickly. Even if it was through a badly photo-shopped montage of Efron’s Jason growing up with De Niro’s Dick. Wait, being raised by De Niro’s D- Moving on . . .

For a moment, I wasn’t sure if this was going to be a dramedy as Jason faced an existential crisis with his boring life imminently set in stone while Dick mourned the loss of his wife. BUT that doubt was soon extinguished when Jason walked in on his ol’ grandpa jerking off. Oh dear.

The first 40 minutes was funnier than I could have imagined. I was in stitches. I actually scratched my head at why the critics gave this such a mauling.

The pair worked really well off each other. This sort of film was never going to win plaudits. It is what it is. A revolting adult comedy with a shed load of revolting college humour. A guilty pleasure that was right up my street; “You still Jenny from the C*ck Block?”

De Niro really didn’t give a flying fook. Effing and jeffing in every frame (I mean come on. It’s not as if we haven’t seen the guy swear before) and giving it his all. The Oscar winning actor has been working with comedies for the last decade (Analyse This/That and Meet the Parents).

It was also good to see a different side to Efron. I didn’t think the 17 Again star would be able to deliver. He has been quite wooden in his latest efforts. BUT it was funny seeing the prudish Jason breaking out of his shell.

I didn’t expect to see Efron running around naked on a beach covered in swastikas and high on crack (Yeah if you’re shaking your head at that then this film is definitely not for you). An unfortunate encounter with a child shouldn’t have worked and certainly tested the ‘awkward-o-meter’ BUT the cringe-inducing tension was too much.

BUT the second half really did push it and killed a lot of the fun making it just plain stupid.

De Niro’s special forces spiel was boring and cliched. His combat moves and crazy body building really took the biscuit and set up a terrible cameo that was wasted on Danny Glover (Lethal Weapon). I’m sure it was supposed to be a commentary on age and that being old isn’t the end BUT this was never going to be that sort of film to deliver that message.

Julianne Hough (Rock of Ages) was wasted in her role as Jason’s insufferable fiancee, Meredith. Anyone could have played her.

The cheesy subplot between Shadia (The lovely Zoey Deutch – Ringer) and Jason was far too hammy and lazy that it slackened the pace tremendously. The pair had reasonable chemistry BUT it was all so predictable and unnecessary as Jason realised that maybe Meredith isn’t the one.

Adam Pally’s (Happy Endings) Cousin Nick was delightfully revolting and wasn’t in it enough. Jason Mantzoukas (The Dictator) was hysterical as Tan Pam; the crazed dealer that the local police seemed to have a soft spot for. BUT despite his hilarious introduction, he soon overstayed his welcome and kept popping up. The gags and lines getting duller with each re-appearance.

And that was the main problem; the longer the film went on, the worse it got. The sex gags, incessant drug use and swearing just went for the shock factor and by the 75 minute marker, I was numb. The punch lines getting more juvenile by each closing minute.

De Niro getting street cred with the local Miami thugs. Not bad. Rapping and dropping the N bomb. Not so much.

As I said before, I expected a lot worse and it was certainly watchable. The gross out college humour that dominated the Noughties (Euro Trip, Road Trip, American Pie) in full flow. If that ticks all the boxes, you’ll love it. If it didn’t, unless you want to see an Oscar great taking a nose dive with his career and flashing his penis then I don’t think this is going to offer anything for you.