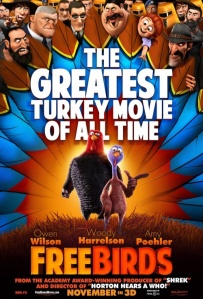 A few strikes short of a turkey with this one, I’m afraid.

A 90 minute mish mash of animated buffoonery that couldn’t even keep the kids in the cinema interested.

Two turkeys enter a time machine in a government facility and go back to the first Thanksgiving in the 16th Century to get their race off the menu. (Yup, you read that right)

After a fantastic 3D opening credit sequence, I could feel my interest wavering like the hammy plot line. We deal with the usual spiel of the loner turkey Reggie (voiced by Owen Wilson) who is rejected, from the farmhouse flock, for being different.

His constant urge to break the mould leads to his exile and a hazy plot involving a pardon from the President of the United States. Bizarre. I don’t mind sitting for 90 minutes with an animated feature BUT it has to be either; a) watchable, b) funny, or c) utterly bonkers. Free Birds misses the mark on all three.

The introduction of the renegade turkey Jake (Woody Harrelson) was a much needed boost. Harrelson delivered the silly lines with aplomb. It also delivered a good duo set up.

Jake needs Reggie’s help to save their race after receiving a prophecy from the Great Turkey and a Sacred Time knob (No, seriously. Not making this up). Leading to a mediocre adventure. The government facility sequence delivered the laughs for me and one of the silliest one liners;

“We have a contaminant. It’s a turkey. How do we address the situation?”

However, once Harrelson and Wilson escape the facility (in a brilliant piece of animation) with the time machine named S.T.E.V.E. (Space Time Exploration Vehicle Envoy), voiced by none other than the legendary George Takei, the jokes fall sparse and flat.

Wilson’s comedy schtick failed to make an impression on the protagonist. He just came across as neurotic, whiny and annoying. When the featherheads travel back in time, it didn’t get much better.

They go back to the 16th Century and discover a tribe of turkeys who run across trees and hide underground from the pilgrims (and surprisingly absent Native Americans) until the final minutes. The action sequences were very watchable and well executed.

BUT the promising duo set up between Harrelson and Wilson was soon torn apart by the usual love interest sub plot (Not even Amy Poehler could save the day with her feisty lazy eyed protagonist) and some stupid macho rivalry between Harrelson’s Jake and head honcho Ranger (Jimmy Hayward).

It stole a funny pairing and replaced it with an annoying one. At first, the rivalry did have its moments but it soon went on far too long. A stand off gag soon drolled out into a idiotic dance off. The more random skits that popped up in the piece surprised me more than the planned ones. A telenovela skit was unexpected but hilarious. Not even Dr Zulu with his patented phrase could save this dead bird.

And the turkey hunter. Apart from me wondering whether it was Ray Winstone voicing him for 20 minutes (Until I caved and checked the IMDB app. It wasn’t. It was Colm Meaney) was completely unmemorable and flat.

The 3D was not worth investing in at all. Another wasted opportunity. What annoyed me was that the film had a different, if ridiculous, premise that went nowhere. The story line was lazy. Filled with dreadful gags and animated buffoonery. The time travel aspect was barely touched on. And when it was, it was so lazily done and riddled with plot holes that I don’t know why they even bothered.

I know, it’s a kid’s film but come on? There are so many better family flicks out there. This was clearly just reaping the profits off the Thanksgiving season.

This really was a turkey, alright. It fell short on everything. I would invest in another movie for the little ‘uns.