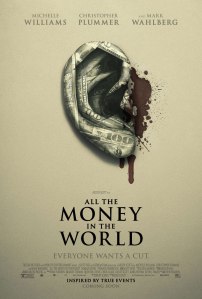 All in the money in the world can’t hide how mediocre this crime biopic really was.

The story of the kidnapping of 16-year-old John Paul Getty III and the desperate attempt by his devoted mother to convince his billionaire grandfather Jean Paul Getty to pay the ransom.

A glorious opening sequence (encapsulated by Dariusz Wolski’s beautiful cinematography) summed up the movie in a nutshell as Charlie Plummer’s (Not a relation) John Paul Getty III drunkenly stumbled along the busy and lively streets of Rome like something out of Roman Holiday.

Style over substance. Like most of Ridley Scott’s movies of late.

Don’t get me wrong, it was watchable. BUT with the cast involved and the subject matter at hand, I expected more.

It’s hard not to talk about Spacey’s absence. I was a big fan of the actor and I felt the scandal has been used as a PR piece to flog a flailing film. I couldn’t help but imagine how he would have handled the role. Injecting that House of Cards menace.

BUT at that same stroke (and for all the hype), John Paul Getty wasn’t really in this film as much as you’d think or hope. So God knows how Spacey was being nominated for an Oscar before the scandal.

I don’t want to take anything away from Christopher Plummer. He was a charismatic and engaging presence that delivered a worthy performance. Even more so if he did the re-shoots in just NINE days.

He really excelled (as did Michelle Williams) in a compelling scene involving the handling of Gail’s divorce. Absurd, brutal and jaw dropping as Getty dictated the terms. Using the children as nothing more than collateral in a business transaction.

Williams’ expressions and stern demeanour during that entire sequence was worth an awards nod alone. I just wish there was more of that fire and friction BUT Williams and Plummer spent too much of the movie apart. Shame.

The slow burning tempo kept my interest (at first) as it flicked back and forth from the kidnapping to Getty’s past as he worked his way up.

The lessons in money and value weren’t surprising. Despite the small sequences that Getty featured in, it still spoke volumes. “You’re not a person anymore. You’re a symbol”. The fact his name alone made an 11 dollar statue turn into an 11 MILLION dollar one said it all.

“A man who has children gives hostages to fortune”. 14 grandchildren encourages 14 kidnappings. Shrewd and grotesque. You couldn’t help BUT laugh at the tycoon.

There was a sickening irony to Getty’s ruthless rationalizing as a number of countries claimed they had Getty’s grandson. And yet he can barter over rare paintings instead of his own grandson’s life?

Despite an engaging introduction, I found that Mark Wahlberg’s hostage negotiator Fletcher Chase grew increasingly passive and unnecessary as the film progressed.

I know Getty hired him for appearances with no intention of paying BUT Chase seemed genuinely concerned at bringing the boy home and proving the billionaire wrong. And yet sitting by the phone and stating the obvious seemed to be his key priority.

And the chemistry and strange flirting between him and Gail felt forced. Another cook spoiling the broth.

And once Williams was able to get into the fold, she took over his role (and purpose) anyway. Finally putting her foot down. Williams was a good lead BUT she spent too much of the film in the background. Only really getting to shine in the final third.

My main issue was the pacing. It felt 30 to 45 minutes longer than it should have been. The story felt stretched and there were only so many beautiful locations and capitalist quotes I could take.

I was engrossed in the grandson’s kidnapping and his estranged relationship with his handler Cinquanta (Romain Duris). And dare I say, I was more impressed by Duris’ performance as the conflicted Cinquanta than the stellar leads.

Both victims in a game with no winners. All for a bit of the green (No, not that green. Money).

I felt the rest of the supporting cast at Scott’s disposal only had generic roles to work with. It was good to see Timothy Hutton. Even if it was in a tragically minute role. And Andrew Buchan’s surprising (albeit blink and you’ll miss it) turn certainly delivered.

However, the finale was tense and riveting. A cobbled street chase sequence finally got everybody involved and delivered more of what I had expected from the get go.

I don’t need action 24/7 BUT I want the scenes to go somewhere. This should have been a brutal commentary on corporate greed BUT it was too disjointed and complacent.

It wasn’t a complete waste and there were moments to be had BUT for all the hype in the world, that was it. Moments. Despite the best efforts of a talented cast.