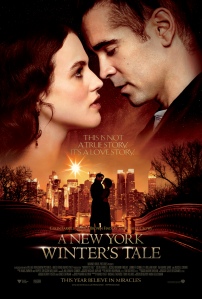 An unexpected watch. Went in to the screen (not literally) expecting the usual luvvy duvvy guff (my terminology for romance stuff), but came out surprised. A well-acted love story that is as different as it is strange. Cudos for the concept but not so much for its execution. Great chemistry from a great cast shies away from the numerous plot holes. However, I would say give it a go. One that doesn’t deserve the backlash it received.

At its core without spoiling too much is the story of thief Peter Lake (Colin Farrell) who fights to keep a dying girl’s (the beautiful Jessica Brown-Findlay from Downton Abbey) hope alive in a battle against a devilish villain, the scarfaced Pearly Soames (a sinister Russell Crowe). However, what ensues is quite different, actually. Their love unwittingly becomes a game between hidden angels and demons. I kid you not. A supernatural love fantasy that spans a century . . . almost.

Not what I expected at all from the trailers. I was going in for a typical by the numbers old fashioned period piece. The opening hooked me from the get go. We follow an amnesiac Farrell in the present day New York attempting to piece together his identity and his past. It all flicks back and forth and has enough questions and intrigue to keep me quiet.

Once the story sets itself in 1916 and the supernatural elements kick in, it gets even crazier. It all settles down a little too comfortably when Farrell and Findlay first meet, with the pace slackening. The usual love at first sight guff. The chemistry between Findlay and Farrell is brilliant. They make such a likeable couple that can get away with some of the more cringey one liners.

Crowe plays the baddie role to perfection. But for even with his Bond villain scar face, you can’t help but feel his role is being wasted. Reduced to merely plotting, making deals with fallen angels and demanding approval from his superior, The Judge (ol’ Big Horns himself. That’s right. The Devil). Cue an unexpected cameo that brought a smile. I would love to tell you. But this a story all about how . . .

I don’t want to talk about the story too much as I do want people to see this.

Caleb Deschanel’s cinematography certainly made the film worth looking at. The performances are brilliant with a massive ensemble; William Hurt (Lost in Space/Damages), Jennifer Connolly (Labyrinth/Blood Diamond), Matt Bomer (White Collar/Glee) and Scott Grimes (ER/Band of Brothers) in a blink and you’ll miss it role.

Now I understand that the film was adapted from a Mark Helprin novel. Unfortunately I will admit that I haven’t read it. This film has certainly peaked my interest. But that is mainly because despite its attributes and every supernatural twist or turn, a bigger plot hole popped its ugly head. Without being too spoilerific, why was Farrell Irish when his parents were Polish immigrants? Can the guy really not do any other accent?

And what was the deal with the horse? Anyway, despite being pulled apart at the seams, it’s still a nice jacket to look at, even if it looks different to what you expected when you paid for it. An interesting concept for a debut from writer/director Akiva Goldsman. Considering this was the guy (yeah he’s a guy. I know, right? Thank God I did my research) who produced the Paranormal Activity franchise.

An easy-going supernatural love ride that may be a bit shoddy on the exposition but makes up for it with originality, special effects and good acting.