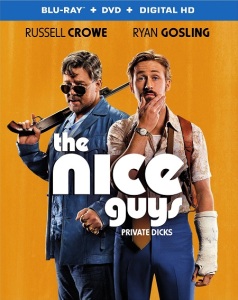 Writer/director Shane Black is back with a new noir thriller and a dysfunctional duo in Crowe and Gosling as the private eyes who unwittingly get involved in the same case.

Crowe was brilliant was the no holds barred ‘punch first ask questions later’ Jackson Healey. I wasn’t sure if I was going to like his character after his macho introduction. Black’s lines didn’t really fly out at me like Kiss Kiss BUT there were still a few jewels: “Marriage is buying a house for somebody you hate. Remember that”.

Crowe playing yet another hard man. Here we go. BUT once he crossed paths with the equally mental Holland March, I knew we were in for a treat.

The pair had great chemistry and worked well off each other. Gosling stole the show. After seeing him in so many super serious dramas; Drive, The Place Beyond the Pines and Only God Forgives (God forgive whoever made that movie), it made a change to see him play such an idiot.

He was hilarious and made the fumbling fool look effortless. Cutting up his hand trying to break into an office. Dropping his gun on numerous occasions. The guy literally falls into trouble. A running gag with the drunk detective falling everywhere had me in stitches.

Despite all the tomfoolery, March and Healey were perfect noir protagonists. Healey, the man with a grudge. Out to right wrongs. No matter the cost. March, a man on the edge seeking solace in the bottom of a bottle after losing his wife. We introduced to the guy fulled dressed in the bath. A tattoo on his right hand saying; “You will never be happy”.

The first 45 minutes was fantastic. It was mad, quick witted and confusing as hell. Everything I expected from Black. It ticked all the boxes.

Keith David (The Thing) and Beau Knapp (Southpaw) were great as the appropriately titled Older Guy and Blue Face. Two murky underlings hot on the pair’s track to find the only witness to the crazy case.

The introduction of Angourie Rice as March’s daughter Holly gave March an extra depth and showed a softer side to Healey. However, she soon overstayed her welcome and took a good portion of the attention (and gags) away from the pair.

Her ‘moral compass’ viewpoint and busybody detective solving got on my nerves and killed a lot of the fun for me. And that was the problem, a heavy middle act got bogged down by too many serious moments and a befuddling plot.

Margaret Qualley (The Leftovers) was dreadfully irritating as Amelia. The running gag of her (Well, running away) got on my nerves. Her constant reappearances throughout the film really tested my patience. I’m sure that was the point BUT it didn’t leave me smiling.

Matt Bomer (Magic Mike) was heavily underused as the merciless hitman. A change of role BUT anyone could have played him. Kim Basinger (L.A. Confidential) was also wasted in her role as the shady Chief Justice. She may be looking good at 62 BUT her character was pushed in the background too much. Just another generic corrupt politician. Shame.

“Okay, that explains basically nothing” – The plot, despite all its intentional contrivances, was actually quite predictable and a little flat after all the mystery.

The lumbering pace and the snappy one liners lost their zing. BUT thankfully, a frantic and fiery final act restored it back on track.

It was tough NOT to draw comparisons with Kiss Kiss Bang Bang. An underrated and heavily recommended watch. BUT this was still good fun and definitely a breath of fresh air after the feeble efforts I’ve slogged through.

Despite my grumbles, I still enjoyed it. Thanks to the crazy coupling of Crowe and Gosling.

I will leave you with one of my favourite scenes and the best movie line I’ve heard in a while.