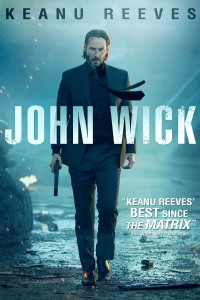 Woah! If you’re looking for a half decent action flick, I’d pick Wick.

An ex-hitman (Keanu Reeves) comes out of retirement to track down the gangsters that took everything from him.

This is probably the best I’ve seen him act in some time. His whispery voice, stone faced pallor and wooden delivery suited the mystery action man.

What I liked about John Wick was that it didn’t mess around. It set the premise up and got down to business. The only gripe I had about the opening was that it was a flashback. We watch Wick collapse to the floor bleeding out while looking at a video of his wife.

It wasn’t necessary and while everything else was entertaining enough, that little niggle kept reminding me that this was all a flashback. The hitman will get hit.

Wick gets the adorable little beagle within the first few minutes. And loses him with fifteen. I kid you not.

We get a sense of the isolated life that John has made for himself straight away. You could relate to his frustration and aggression quite easily. His angry test track burn out on an empty airfield demonstrated that perfectly.

I expected more flashbacks or flickers between him and his wife. Bridget Moynahan (Blue Bloods) had the easiest job going. What is it with directors giving talented supporting actresses meaningless roles? An extra could have played her part.

Now I must reiterate that this is not just a revenge movie over a dog. Apologies to the RSPCA lovers but the dog is merely a symbol of John’s love and grief. The fact he was not allowed to grieve.

That right metaphorically taken from him in the form of a bludgeoned beagle. The death was off screen and done as subtly as possible for anyone who doesn’t fancy seeing a little pup punished. So John seeks out vengeance on the idiots who thought it was funny to cross him.

If anything, it was all over a car. A Mustang. Wick didn’t want to sell and Alfie Allen’s cocky spoilt gangster brat Iosef Tarasov REALLY wanted it. What a fool. He really picked the wrong guy.

Alfie Allen (Game of Thrones) may be getting type cast at the moment with playing creeps but he does it so well. A snarly little toe rag in desperate need of a slap or two.

The mystery surrounding Wick and his past are never really explained or explored. It’s infuriating in one instance but great in another. I loved the respect and code of honour among the gangsters and assassins in this seemingly ruthless and cutthroat business.

Michael Nyqvist (The original Girl With The Dragon Tattoo) was superb. A perfect adversary to Wick. His reaction when his son informs him that he has stolen from Wick. Fear, terror and anger.

The build up was just right. The gangsters preparing for battle. Wick breaking up a hidden briefcase with gold and guns under his concrete floor. You know. The usual.

The gold? Some strange currency that the assassins pay each other off with. Baffling. A gold coin here and there. No questions asked.

The hotel was an interesting set up. It added an extra dimension to something that should have been a bog standard actioner. The establishment even has rules. No killing without cause or authority. Mental.

There was quite a good supporting cast. Shame that some weren’t really used to their full potential. Adrianne Palicki (Friday Night Lights) was stunning as the sultry assassin out to break said rules. Ian McShane (Deadwood) was pretty much Ian McShane but played the hotel owner Winston with aplomb. I wanted more of him. Scene stealing at every chance.

John Leguizamo and Lance Reddick (Fringe) were reduced to small roles. They did their best with the parts. Reddick with his stern prowess as The Hotel Manager being a particular highlight.

Considering Reeves is 50, he can still kick an ass or two. Not quite ready for the Expendables scrap heap yet. If a Matrix reboot (Because let’s be honest, it’s only a matter of time) was ever on the cards, he could still do it.

The fight sequences were fast, frantic and furious. If a little repetitive. There are so many hand gun combinations you can do in a fight scene without them being flat out ridiculous or just tedious.

It was a lot better than I expected. Violent, brutal and mental in one instance. Mysterious and intriguing the next. The pace may dither in parts and the end result was always going to be a predictable one but I can certainly commend the writers for trying to do something a little different or at least make it worth watching. 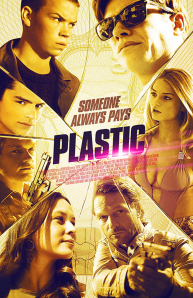 Surprisingly watchable and entertaining. Hardly original or groundbreaking. Pretty much a darker Hustled up Hollyoaks hybrid but with a likeable and talented young British cast, I can think of worst ways to kill 90-odd minutes.

I went in expecting the worst and was relieved. A watchable easygoing crime caper, even if the end result is predictably the same. Ed Speelers has finally found a project to show off his talents after a number of misfires; Eragon and ITV’s Echo Beach. Playing the charismatic lead Sam, desperate to make a quick buck, he leads a rag tag team of chosen criminals who inevitably end up messing with the wrong people. In all fairness, the first 20 minutes zipped along quite nicely with the little fraudsters starting off as little Del Boys, fobbing off stolen merch to stereotypical posh toffs at uni. Stereotypical if hilarious riffs on the Made in Chelsea numpties.

The team of grifters get a passion for plastic. Stealing credit card information and data to buy a lot of expensive jewellery and  harvest a lot of wonga. The ease in which the team obtain their data is scarily realistic; perfectly demonstrated in a petrol station sequence in which cameras are positioned perfectly to catch pins and fake machines. A crime that does need to stop as the world goes DPA crazy. The “subtle” social commentary on the fact that students who are studying their degrees or have achieved them are probably not going to get a job in that field is a harsh reality that I can relate to. But resorting to corporate espionage and card crime, meh, I’ll stick to blogging. The lazy jibes about the economic crisis wasn’t necessary. We’re all stuck in it. Been there. Can’t afford the t-shirt. Felt like a mere excuse to help justify the cockney rebels’ cause.

However, the team soon rip off the wrong man, the ever reliable slithery Thomas Kretschmann (Dracula/Wanted). Not enough of him to be honest but he manages to make a mark. Hardly Brick Top from Snatch but impressionable none the same. He gives them a deadline of two weeks to pay up a £2 million “compensation” fee, leading to one massive, crazy, can’t-believe-it-but-apparently-a-true-story, con. Will Poulter (We’re the Millers/Son of Rambo) was arguably overshadowed. And for some reason, the lad had not grown up enough to carry the conviction his character craved. In one scene, the gruff gangster worked, the other he seemed more like he was doing one of his performances in School of Comedy. He delivers some of the more comical one liners. I mentioned overshadowed as one culprit in particular steals every scene and that goes to old Theon Lovejoy (prefer that comparison to sibling of Lily Allen) Alfie Allen.

Allen has always been able to play the shady, slick faced shithead but he does it so well and delivers yet again as the volatile Yatesey. A necessary, if untrustworthy, evil. A ticking timebomb waiting to explode. The beautiful eye candy, I mean, Emma Rigby (Hollyoaks) doing her best to be nothing more than a stocky love interest. I couldn’t believe that Graham McTavish (Dwalin from The Hobbit franchise) was in this, playing the ridiculous OTT and gullible mark to perfection, lapping up every minute.  It was great to see Ashley Chin (Starred Up) and Robbie Gee (speaking of Snatch) in somewhat limited roles. But talented enough to stand out. And Malese Jow. I only ever remember her from that Nickelodeon show Unfabulous. Wow. Stunning. But perverted comments aside, she plays the supporting role well. Sebastian De Souza (Skins/The Borgias) was originally quite a funny character and you did feel for him as he is rewarded the more irritating gigs but his character soon gets quite annoying and luckily subsides into the background. Shame.

As Sam says at the start of the film, “it’s not how it started but how it ends. How you got there”. And that’s a little bit of the problem, the start was highly watchable and once the con gets going, the plot holes start appearing and once the crazy Mission Impossible costume work comes into it, well it all gets a little silly. There were missed opportunities; most notably in Sam’s recruiting techniques. Intriguing at first, it soon didn’t surmount to anything by the end, without spoiling too much. And when I say, silly. The strange overuse of slow motion by the end of the film was irritating. I mean, a tense build up to an inevitable shoot out sequence borders on parody by the end, with people being shot left right and centre, then popping back up like they have been re-spawned in a game of Call of Duty.

Arguably this could have been a TV movie but in comparison to the bigger budgeted and supposedly more talented counterparts that have been released this year, this fares reasonably well. More so for me as a movie aficionado after an atrocious April of one star cinematic car crashes. Enough to stay afloat. At this moment, I’m looking for films that are watchable and this one falls into it. If you’re expecting Lock, Stock then you will be disappointed. I’m glad that this didn’t try to be, it’s better for it at that sense. But maybe a little of that ambition would have helped it fare a bit better and all. It’s 3 (just) out of 5 for me!