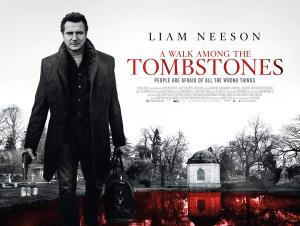 Or Taken To The Grave? Liam Neeson uses his particular set of skills. No, wait! His acting skills (Remember them?) and his gravelly gravitas for the hardened private eye thrown into the seedy underworld of a 90s New York City.

A return to form for the reformed action hero in a suspenseful, if drawn out, gritty neo-noir. If you’re expecting another Taken, then you may be left disappointed.

Now I loved Taken (the first one) and it was great to see Neeson back in the limelight. But I was afraid that he was going to be typecast in the action role indefinitely. Non-Stop (Taken on a Plane) proves my point. BUT I’ll always commend Neeson for Schindler’s List and Rob Roy.

However, Neeson plays the part to perfection. A grisly Philip Marlowe. To be honest, the 90s setting didn’t really provide anything additional to the film. Other than the fact he uses old computers in libraries and payphones. I don’t really believe in the whole “Based on True Events” spiel. Not since Fargo and every horror film for the last decade.

So what’s it about? Private investigator Matthew Scudder (Neeson) is hired by a drug kingpin (Dan Stevens) to find out who kidnapped and murdered his wife.

Dan Stevens (Downton Abbey) is really starting to make a name for himself and plays the part well. But to be honest, his character was a little weak and didn’t really do much until the closing moments.

Astro (Earth to Echo) played Neeson’s homeless sidekick well and the pair worked well together. Some will find his character incredibly irritating and their “bonding” conversations completely unnecessary and unsuited to Scudder’s loner.

At least we won’t be as annoyed as Ruth Wilson (Luther) whose part was completely removed from the film to make Scudder more of a loner. All she has attached to her name is a credit. And yet Astro made the cut? Strange.

However, the real scene stealer and adversary to Neeson’s Marlowe was David Harbour (End of Watch) as the maniacal killer. He was brilliant and sinister as hell. His creepy voice delivery was memorable enough. Olafur Darri Olafsson (The Secret Life of Walter Mitty) also made a memorable role as the strange but morally torn middle man.

My main quip with A Walk Among The Tombstones was the length. A zippy opening with Neeson doing what he does best was soon put on a slow boil. The story tries its best to keep you hooked but there isn’t enough to justify the running time.

The story barely scrapes the surface of the sordid underbelly that these dark antagonists lurk from. There are creepy and suspenseful moments and Neeson certainly carries the film but despite all its promise; Mihai Malaimare Jr’s grainy noir-esque cinematography, Neeson’s snappy one liners and Harbour’s menace, it falls short of your expectations.

The story line meanders along with the surprise abduction and punch-em-up from Neeson but it’s all a little by the book. Endless red herrings with leads that go nowhere slowing down and killing what mystery and suspense was brewing.

The finale was certainly tense and made up for the meandering middle act but it was all so predictable. I was little disappointed that it had to go for a big fist fight and shoot em up to keep in and bank on Neeson’s resurged action hero fame.

The first hour was engaging, tense and slow burning but we got to see Neeson do what he does best . . . Act. Don’t get me wrong, there were some decent punch em up moments that Sam Spade would be proud of but it seemed to run out of ideas, go on a bit too long and then end with a big action number to stop bums fidgeting in seats.

If you want Taken, watch . . . Taken. But if you want to see a return (of sorts) for a talented actor and have a taste for noir, then it’s worth a gander.