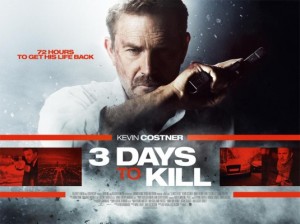 It will take 3 days to kill the pain of watching . . . No, it’s not that bad. Unfortunately not that great either. Kevin Costner plays the hard man as well as he can. It’s just a shame that it’s the same old recycled clichéd action movie garbage that we’ve come to accept. By all means, it’s certainly watchable but that’s because I knew what to expect going in.

We have the usual opening stake out that sets up bad guy, good guy. Costner playing a trained killer with . . . a cold. That’s right, coughing and spluttering away. Inevitably that would lead to something more important. But for an opening, I was thinking how did he kill all those bad men? Simple. They don’t show you it. Just a room with 30 dead men and Costner strolling out while blowing his nose. The cringe-inducing birthday phone call with his estranged daughter (Hailee Steinfeld) was terrible and so corny. Doing it while people are being shot up and explosions above him. Tut, tut, tut.

Tomas Lemarquis made a great bald, I mean Bond, villain with a dark signature move. But never going to its full gory detail. After all, it was a 12a. Inevitably the stake out goes wrong. Costner loses baldy, collapsing for some reason. That reason is that he is suffering from a terminal illness. So a botched op and a dire diagnosis, not looking good for Kev. Of course, he decides to pack it in and reunite with estranged daughter after neglecting her for 15 years. But . . . oh no. He’s needed for one last job. Deal breaker. Get this. They have an antidote that will help give him more time. Aww.

Costner plays it well. You can tell at points he is just going with it. At one point, he has to write a nice big purple bike in Paris after his daughter rejects his attempts at fatherhood. Old Cossie’s face with a nonchalant shrug says it all. The alluring Amber Heard plays the mysterious femme fatale to perfection. Not enough of her in my opinion (What?). However, once you get past her beauty (Don’t judge me), you realise her character doesn’t do much. Other than look incredibly sexy and inject Mr C with the magic antidote to keep him going. All for her own diabolical plan. Diabolical in the sense that she basically got him to do her work.

Steinfeld, the talented actress that she has proven to be in the past, is incredibly annoying. Unfortunately, it’s mainly because it’s all so predictable and clichéd. Their father/daughter relationship just seems to break up what little action there is. The bickering and snipping works well, at points, but all to an inevitable cause.

Costner’s killer soon turns into a parody of himself. The jokes in which he kidnaps a contact, chucks them in the truck work at first. But then when he keeps doing it, it gets old really quick. The action is also a little lacklustre. Costner grins like a Cheshire cat. And . . . quick edit. Bodies on the floor. Only a couple of scenes where Cos gets to kick ass. And when that happens, it’s not bad. Entertaining enough. The car chase was so quick and flat. Could you really call it one?

Also what infuriated me was, understandably, Costner’s character is ill but collapsing every time he comes close to the bald baddie? Annoying. Connie Nielsen (The Following) wins Mother of the Year for leaving her daughter with an estranged father who has been unreliable and has a mysterious past. Hmmm. Cudos for Steinfeld getting the title of the movie into her lines. The tone at times, jumps from darkly comical to straight balls out (not literally) crazy. An inevitable, and much needed, shoot em up finale boosts the slackening pace.

It’s watchable guff. Nothing more. Costner has enough charisma to carry this bullet ridden mess. Amber Heard is . . . to be expected. There are some good bits but that’s the problem, it’s a film of moments. A funny one, an action packed one, etc. I thought the scenes in which a group of squatters invade Costner’s apartment was quite funny. However, they soon overstay their welcome. Shame. 2.5/5