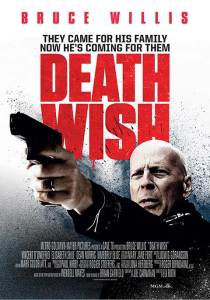 I must have had one watching this tripe . . .

Well, that was what I thought I was going to say.

Regardless of what I think of the man, Bruce Willis can still hold his own in this violent revenge flick.

Dr Paul Kersey (Bruce Willis) is an experienced trauma surgeon, a man who has spent his life saving lives. After an attack on his family, Paul embarks on his own mission for justice.

After the ghastly ratings, I expected something really dire. Being a fan of the original cult crime classic, I wasn’t the happiest to hear of a remake. I mean who could top the icon that was Charles Bronson?! BUT I found this latest rehash surprisingly watchable.

The rapid opening sequence (with a fantastic panning shot) riddled with reports of shootings all over Detroit spoke volumes. Finger on the pulse stuff for a generic shoot-em-up. Especially with what’s been happening with gun crime in the US.

Willis’ robotic introduction didn’t give me high hopes . . . At first. He was always going to have a tough act to follow. BUT it added a degree of cynicism to the surgeon as he apologised to the copper whose partner he couldn’t save. And then moved over to the next bed and saved the monster who killed him.

The family melodrama was incredibly cheesy BUT easy going enough as we waited for the inevitable to happen.

The pacing did leave a little to be desired BUT I wasn’t bored. I liked the fact that Kersey didn’t turn into a stone cold killer straight away. A slow burning montage showed a gradual transformation as this down beaten man grew frustrated with the system and his psychiatrist (Wendy Crewson – Air Force One).

Dean Norris was literally playing Hank from Breaking Bad as Detective Raines. Tied by the rules and hoping for the best.

It took a good 40 minutes before Kersey began his vigilante spree. Donning his Unbreakable hoodie and terrorising the streets.

I was a little sceptical that the tone felt as muddled as its message. It may have raised debates about gun crime and vigilantism BUT it was a bit hard to be taken seriously when Willis would then shoot a drug dealer to a bloody pulp in the next frame.

A scene between Kersey and his father in law (Len Cariou – Blue Bloods) was incredibly hammy as the old boy fended off some poachers and preached about “a man defending his own”. Yawn.

The mismatched song choices killed off the seriousness of certain scenes. Using YouTube to learn how to shoot and assemble guns to AC/DC’s ‘Back in Black’ spoiled what could have been a satirical boiling point.

However, the consumerization of gun culture was brilliantly encapsulated with Bethany, the sales girl at the Jolly Rogers’ gun emporium: “Easy forms to fill, nobody ever fails gun safety class, 100 per cent American made”. Talking about weapons like they were new cars. Kersey’s smirk at such hypocrisy said it all.

The vengeance spree was violent enough as the vigilante ‘honed his craft’. Working his way through the food chain. Looking for the ones who tore his family apart. An unsavoury interrogation with a shady car mechanic did not make for easy viewing after just eating a big ol’ bowl of spaghetti. That’s all I’m saying.

To be honest, I was more surprised at how ‘tame’ this really was. Especially when the director at the helm was Eli “Hostel” Roth. Normally the master of disgust BUT I was relieved to see that NOT everything was taken from the original i.e. the unsavoury rape scene.

It is what is. A violent actioner. Willis held his own and carried the film. It killed the time and deliver what I expected.

It wasn’t perfect and the kills were hardly memorable. I still remember Bronson’s newspaper kill (No, he didn’t kill a guy with a newspaper). BUT nowhere near as unmemorable as Wendy Crewson’s psychiatrist or Vincent D’Onofrio as Kersey’s useless (and incredibly annoying) brother-in-law. Nothing more than a meaningless red herring.

You could pick at the fact that if the police were looking for a vigilante in a dark hoodie, you wouldn’t walk into a public nightclub in said garb with pistol in tow. Come on!

BUT despite the muddled politics and mismatched tone, did we really expect this to be anything other a bloody shoot-em-up?