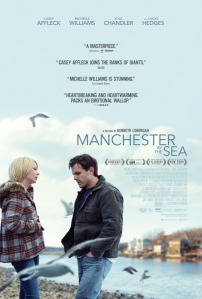 An uncle (Casey Affleck) is asked to take care of his teenage nephew (Lucas Hedges) after the boy’s father (Kyle Chandler) dies.

It’s always a pleasure when a film can surpass your expectations and reward you with something so much more.

It was funny that I was complaining about the La La Land hype with this entry coming in a swift second on the overbearing hype train.

BUT I have to say, this was brilliant.

Casey Affleck has always played strange roles from introverted wackos to isolated loners. This role was perfect for him. He made the socially awkward Lee work a treat.

The slow burning style allowed the drama to unfold perfectly.

We followed Lee as he trundled along his humdrum lifestyle of a janitor at an apartment building. The mundane tasks, the strange tenants, the complaining and weird requests. A ticking time bomb waiting to explode.

The news of his brother’s passing triggering flashbacks. Flicking back and forth between the past and present as we got a better understanding of Lee and the reasons behind his fractious relationship with his nephew.

Baffled to be awarded guardianship after all that had happened. I hadn’t read anything about this film and the revelations with Lee’s past completely surprised me. Don’t worry, no spoilers here.

Lonergan has written a heartfelt story that dealt with grief on such levels. It was almost real.

The awkward exchanges as Lee had to deal with depressing funeral arrangements, idle chit chat and various reactions from people as they learnt of his brother’s passing. It couldn’t be more in tune.

It is a huge gamble to make a 2 and a half hour movie that relies solely on two leads. BUT I don’t think it would worked without Hedges and Affleck. They were brilliant.

The power of a performance that can deliver such emotion that you get caught up in it. There were several scenes that actually got to me. I felt for all of them. Affleck deserved that BAFTA.

It was surprisingly funny, upsetting and dark. I went through a rollercoaster of emotions as did our protagonist. Struggling to communicate with an awkward teenager who was more concerned about his social lifestyle than his father’s death.

The tension bubbling away as Lee, a creature of comforts, seemed desperate to get back to his quiet life. Of course, he had his reasons.

A scene involving frozen meat triggered an unexpected breakdown out of the blue with the pair finally coming to terms with their feelings. I laughed, I cried. Superb.

I remembered Lonergan’s last effort Margaret being one for a testing pace and I know a lot of people grumbled about the pace of this one. BUT I can’t even say this dragged. I was completely engrossed with the characters and the drama. I wanted more.

The supporting cast played their parts perfectly. Michelle Williams wasn’t in this enough. From all the hype, I expected her to be in this for a good portion of the film. Her screen time probably only accumulated to 15/20 minutes?

BUT she was excellent as Lee’s ex-wife. Their reunion was heartbreaking as we realised that Lee was a man tormented by his own demons long before the news of his estranged brother’s death.

Despite my praise, I still had my grumbles. I’m not sure whether it was the cinema surround sound BUT I found Lesley Barber’s music score overbearing. It didn’t take away the emotional impact of the scene BUT I found myself getting increasingly irritated.

It felt like someone was playing with the volume (Maybe they were. I did watch it in forum).

It was only the final act that disappointed me. And that was because it didn’t go in the direction I wanted. Forever a cynical optimist (Yeah, work that one out). Hoping for a happily ever after for the troubled pair.

BUT as the credits rolled (and a little more discussion after), I couldn’t see any other way that the story could end. It worked.

I went expecting in nothing and came out rewarded with a brilliantly acted and well written drama that dealt with grief on many levels.

It is a little gloomy BUT if you’re in the mood for a drama that delivers on the feels, look no further.