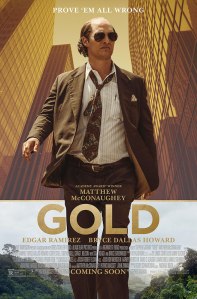 Kenny Wells (Matthew McConaughey), a prospector desperate for a lucky break, teams up with a similarly eager geologist (Edgar Ramirez) and sets off on a journey to find gold in the uncharted jungle of Indonesia.

Right, now I’ve got that out of my system. I can review this properly.

I was actually looking forward to this. And . . .

The opening 20 minutes was painfully slow, disappointing and uninteresting as Wells scraped the bottom of the barrel.

An incredibly dull encounter with his father (A waste of Craig T Nelson) did nothing to get things going. All the metaphors in the world couldn’t liven that scene up.

A flawed protagonist fallen from grace. His family legacy gone; a respected and lucrative prospecting firm now nothing more than a made up office in a dingy bar for the remaining loyal employees. A laughing stock.

I actually struggled to understand McConaughey in the first act. It was True Detective all over again. I should have seen the Audio Described version.

His receding hair line and beer belly won’t win the ladies over. Seriously, he looked like Les Grossman from Tropic Thunder.

I know we were supposed to see a man at his wit’s end BUT the whole “gold calling him in a dream” spiel was a little hokey. An act of desperation. One last roll of the dice. Pawning his own wife’s watch for a plane ticket to Indonesia.

Break or bust. And the rest . . . was thankfully a little bit more enjoyable.

Whether it was a case of sitting too close to the big screen, I found Robert Elswit’s grainy cinematography naff to look at.

It was great to see Martinez finally get a meatier role after popping up in minute parts (Joy, The Girl on the Train and *shudder* that Point Break remake).

He worked well with McConaughey and they made a convincing duo.

The hard grafting and turmoil in the jungle was the much needed spark as Wells bartered and borrowed every penny to get that payload. Hell, the guy even battled malaria for those precious minerals.

At one point, things were getting desperate that Acosta (Ramirez) offered clean water to the workforce in exchange for payment.

The middle act was the saving grace as the pair made the biggest score of a lifetime. You felt for Wells as everything finally fell into place BUT it wasn’t long before our good old friend Greed popped its ugly head.

You had to laugh at all the big fish trying to get a piece of the action and brown nosing the chap after years of snubbing and dismissing his reputation.

Corey Stoll (The Strain) was good as the shifty Wall Street backstabber trying to push Wells out of his cut.

I’ll know some will argue BUT once McConaughey was let loose; he proved once again why he deserved that little golden statue on his mantelpiece.

His charisma and enthusiasm kept things going as the pace stumbled along. I’m not saying his performance was perfect BUT I don’t think I would have been interested at all.

It was a little too stop-start for my liking. The Hangover style shenanigans with an Indonesian playboy millionaire felt like it was in the wrong movie. The CGI’d tiger was a little much (“I’m touching a tiger!” Really?).

Bryce Dallas Howard played the supportive wife well BUT anyone could have played her. Their relationship was far too cliched and bland. A shame, really.

Every time we went back to their melodrama, it disrupted what little momentum it had.

The alluring Rachael Taylor (Jessica Jones) could have played a better femme fatale BUT Wells succumbed to her advances far too easily.

However as more people tried to get a piece of the action and Well’s ego grew that much bigger, trouble wasn’t far behind.

The murky Wall Street backdrop swallowing our hero into the abyss. The film flicked back and forth as Wells came under heavy scrutiny with his own story falling apart. Did that conversation happen? Did they even find gold?

What has Toby Kebbell got to do to get a decent movie role these days? He was completely wasted as a generic FBI agent. Woeful.

The script could have been so much better. Some of the lines McMumbler churned out just didn’t have the dramatic impact that it should have.

The final 30 minutes redeemed what was a drawn out and patchy affair.

It was intriguing, engaging and everything I expected from the rest of the film. I was actually impressed with the surprisingly ambiguous ending. I was left smiling like our bewildered protagonist.

BUT would I rush to see it again?