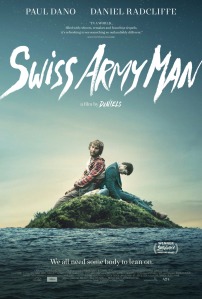 What the hell did I just watch?

A hopeless man (Paul Dano) stranded on a deserted island befriends a dead body and together they go on a surreal journey to get home.

Now imagine if Tom Hanks in Cast Away decided to interact with a farting corpse instead of a volleyball and . . . you still wouldn’t come close to anything that comes out of this strange but bizarrely watchable piece.

Brought to you by the guys that produced that Lil Jon ‘Turn Down for What?’ music video?! Really?! I think it’s fair to say that this isn’t going to be everybody’s cup of tea. What drove Daniel Radcliffe to do this? He really wants to shake off that Harry Potter image.

The film that triggered walkouts at the Sundance Festival? Well, that can only mean one thing. Let’s give it a watch.

The dark opening lulled me into thinking that this might be a different movie altogether with a defeated Hank (Dano – There Will Be Blood) getting ready to hang himself. Tired, frustrated and alone. The numerous and increasingly elaborate ‘message’ bottles (or boats in this case) highlighting the time our hero has endured on the desolate sand patch.

And then along came Manny (Daniel Radcliffe). Within 10 minutes I wasn’t sure if I wanted to carry on. Especially when the lead protagonist was riding the corpse like a farting jet ski across the ocean. No joke.

However once I got past the endless fart gags and puerile humour, there was a quirky charm that kept me watching. I don’t think it would have worked at all if it wasn’t for Dano and Radcliffe. They were an entertaining pair and for a moment, I almost bought into the madness of it all.

You could empathize with Hank’s vulnerable loner as he confides in the corpse about his own personal problems. I don’t think I’m spoiling anything by saying that Radcliffe/Manny does talk. I was getting worried after 20-odd minutes that Dano was just going to be talking to a demented Radcliffe pulling some serious stroke face for 90 minutes.

The make up was actually pretty good on Radcliffe. He played a corpse well. Yeah, I can’t believe I wrote that either. His movements and facial expressions were pretty bang on.

There were genuine moments where I laughed at the pair as they tackled through the tough terrain of the wilderness to get home. Hank’s crazy creations were brilliant. It teased a little Wes Anderson vibe with all the strange gizmos and props that he made out of wreckage, rubbish and trees.

A particular highlight being a staged bus scene in which Hank simulates his chance encounter with the girl of his dreams (Mary Elizabeth Winstead – 10 Cloverfield Lane).  The only problem is that the joke kind of pushed it when the pair pretended to practice a date with Hank dressing up as her. Things getting ever more uncomfortable when they started holding hands. Eurgh.

The two Dans (writer/directors Dan Kwan and Daniel Scheinert) subtlety tackled some existential issues (“What is life?”) in between the farts and sex talk as Hank has to re-educate the naive and inquisitive Manny about the ways of the world.

In one scene, it was funny and clever with the journey being a metaphor for Hank overcoming his own fears and doubts and opening up about his troubled childhood. BUT then that would be completely undermined in the next sequence with something stupid and juvenile.

“I think your penis is guiding us home. It’s pointing north”. Make of that what you will.

I couldn’t help but laugh at the ingenious ways in which Hank would discover a new use for Manny from dispensing fresh rain water from his gut to shooting out objects like bullets to help hunt down prey. Using his arms to chop wood and his teeth to shave. NO! I’m not making this up!

It was utterly bonkers. Different, original BUT at the same stroke, weird and all over the place. The pace dragged in parts and the finale brought things to a head that left far too many questions.

And the crazy soundtrack by Andy Hull and Robert McDowell?! Was it a joke or master stroke? (Didn’t mean to rhyme). One thing can be agreed, I’ll never listen to the Jurassic Park theme in the same way again.

Winstead was completely wasted in her role. Anyone could have played her. Although her reaction in the closing moments did pretty much sum up my own feelings:

A mixed bag. I mean it got points for thinking outside of the box and its odd style was hypnotic enough to keep me watching. BUT by the end, I wasn’t sure whether I liked it or not. I still don’t know.

If that sounds intriguing to you, then go for it. IF NOT, swiftly move on.